The mid-eighteenth century witnessed the birth and evolution of a commercial literary culture and the expansion of popular literacy, while also promoting the idea of reading as intensely personal and solitary. Abigail Williams reveals that the changes in print also brought the widespread practice of reading as a social activity.

On April 15th, 1802, Dorothy and William Wordsworth took one of the most significant walks in literary history. They set out in blustery weather, across the fells near Ullswater in the Lake District. It was misty and mild, with a strong wind, and the first signs of spring were emerging in the hedgerows. As they passed the ridge at Gowbarrow Park, they saw a few wild daffodils, and then as they walked along, they discovered a whole belt of them, almost as broad as a road. Dorothy’s journal entry reads:

I never saw daffodils so beautiful they grew among the mossy stones about & about them, some rested their heads upon these stones as on a pillow for weariness & the rest tossed & reeled & danced & seemed as if they verily laughed with the wind that blew upon them over the Lake, they looked so gay ever glancing ever changing.

Brother and sister continued their walk, and they took refuge in a tavern, where they enjoyed a hearty meal of ham and potatoes. Dorothy says that after supper,

William was sitting by a bright fire when I came downstairs. He soon made his way to the Library piled up in a corner of the window. He brought out a volume of Enfield’s Speaker, another miscellany, & an odd volume of Congreve’s plays. We had a glass of warm rum & water—we enjoyed ourselves & wished for Mary.

There is a lot to say about this record of a day. Dorothy’s diary entry, which is longer than the extract here, was to provide the basis for her brother’s most celebrated poem “I wandered lonely as a cloud,” written two years later, in which he describes the daffodils as joyful companions to a solitary poet-walker. The poem is among the most famous lyrics in English literature, the very embodiment of the romantic celebration of imagination and nature. Dorothy’s diary, on the other hand, is little known outside academic circles. Published verse and unpublished manuscript, their respective fates tell us a lot about the perceived status of different forms of writing, and the role of gender and genre in the formation of the literary canon. But what is also striking about this episode is that the poem and the diary represent two very different kinds of literary activity. In writing about the daffodils, Wordsworth emphasised the solipsistic aspect of his experience; the solitary, absorptive, silent nature of imagination, and the images which “flash upon the inward eye.” But his sister’s journal entry, behind that poem, records the mutual enjoyment of the walk and its daffodils, and it ends, significantly, with communal domestic entertainment. Brother and sister sit by the fire in a tavern after a long day out, taking down random popular collections of verse and drama from the shelves, and reading them aloud together over a glass of rum before bed. Dorothy’s version, written in a diary which she often read aloud to her brother, is a story about shared experience.

William Wordsworth and other romantic writers were hugely influential in shaping a model of poetry and literature as a form of individual self-expression, and reading as a source of personal inspiration and self-discovery. For centuries before and since, poets, artists and philosophers have stressed the role of solitude in the creation of culture and knowledge. But communal reading and literary activity has been an equally important part of our cultural history. What might we learn if we dwelt a bit longer on Dorothy Wordsworth’s account of her day of walking and reading? Was their experience shared or singular? Was enjoying a book together the same as doing it alone? Did it actually matter what they read, or was the point was that they were together? The episode illuminates how the appreciation of a work could be shaped by the practical settings within which it was enjoyed—in this case, the valuing of “an odd volume” of William Congreve’s plays is less about its content, and more about the circumstances in which it is read, over a glass of warm rum, with a loved one, after a memorable day out. We see the whimsical, happenstance nature of literary choices: the Wordsworths take down whatever they find on the shelves of the tavern, and it serves an end, for an evening—it is not a carefully thought-out program of intellectual improvement. What is read is less important than how. Dorothy’s example of shared reading offers us a literary experience in which place, company, food, drink and accessibility all play an important part.

We used to read aloud, and we used to read together. A history of the kind of sociable reading described in Dorothy’s diary puts books back into lives and homes, enabling us to see literature in the round. Hairdressing, carriage rides, and stuttering children all play a part in its story. A whole range of factors: limited lighting, rudimentary ophthalmology, increased leisure time, desire for the display of polite knowledge, the need to use time productively, made reading together more useful and practical than reading alone. But before we look back with nostalgia on this era of wholesome togetherness and homemade entertainment, we might also reflect on how sociable reading continues to shape contemporary culture.

In Britain, educational initiatives currently promote “poetry by heart.” Where once children were encouraged to recite verse out loud for social and moral improvement, the orality of literature is now seen as crucial to establishing literacy. Among adults, the rise of book groups demonstrates the appetite for communal reading. Works aimed at this readership come packaged up with their own questions for discussion—as for our eighteenth-century forebears, the enjoyment of reading is coupled with the pleasure of conversations around the book. New technologies enable us to mark up and share digitally our favourite passages in a book, as we might once have transcribed them into a journal. Short form fiction is flourishing, because it is so well suited to both small mobile devices, and time-poor readers. Such habits, like the casual reading patterns described by Dorothy Wordsworth, offer moments of imaginative engagement rather than lengthy immersion.

We are apt to describe our own age as uniquely distracted, a time in which attention spans diminish and texts are perpetually in competition with other stimuli. But in fact, anxieties about forms of reading are not new. Eighteenth-century commentators worried about learning bought too easily, and readers who could no longer engage with whole texts. Families encouraged reading together because they feared that young people were losing their sense of reality through their immersion in addictive imaginative fictions. The world of eighteenth century reading was a very different land, but in some ways, perhaps not so far from our own as we like to think. 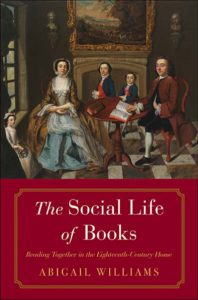 Abigail Williams is professor of eighteenth-century studies and Lord White Fellow and Tutor at St. Peter’s College, University of Oxford. She lives in Oxford, UK.