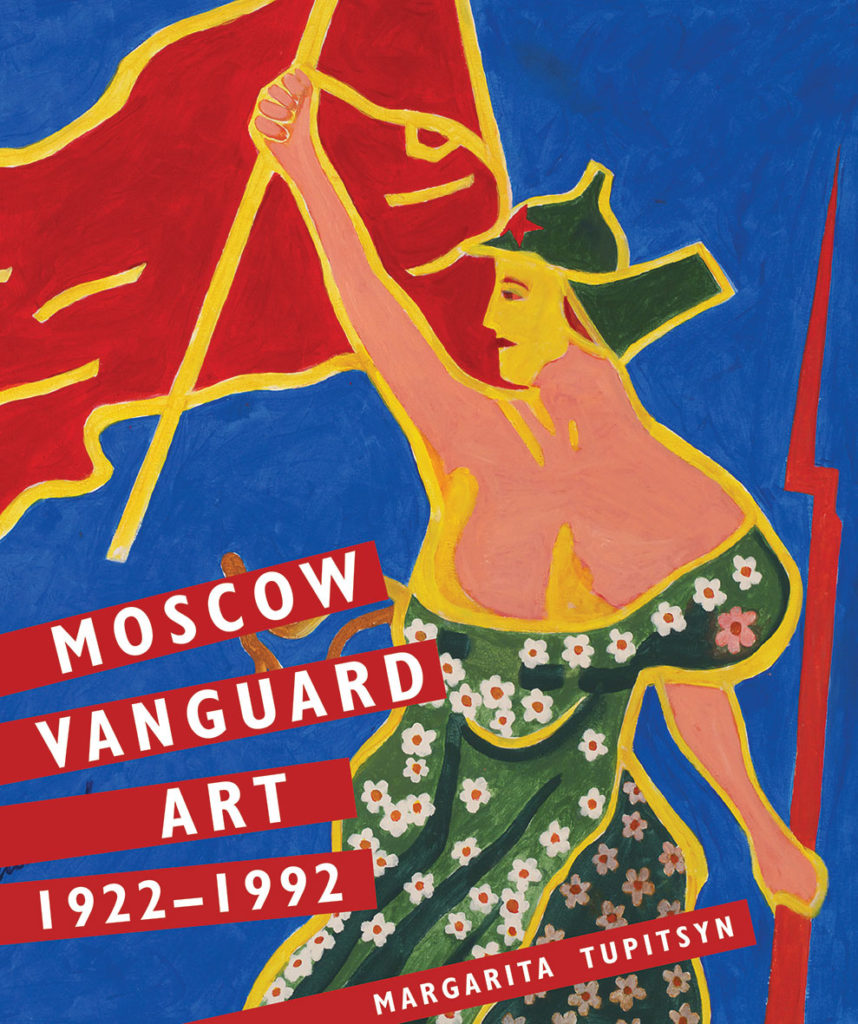 2017 is the centenary of the Russian Revolution, yet five years later, after the Soviet Regime was established, a profound cultural shift was taking place. Under Soviet rule restlessness was growing within Russia’s creative communities and this resistance to the regime began to emerge in art of the time. In this study of Russian art between 1922 and 1992, seen through the artistic movements of the Russian avant-garde, socialist realism and Soviet post war art, Margarita Tupitsyn offers a penetrating assessment of this period for Russian art and its artists. Moscow Vanguard Art shows how art was adopted as a mode of resistance and endeavours to locate lesser-known figures of the Moscow scene alongside artists such as Malevich and Tatlin.

Margarita Tupitsyn is an independent curator and author of four books published by Yale, including Malevich and Film (2002) and El Lissitzky: Beyond the Abstract Cabinet (1999).

YaleBooks Blog Can you outline for us what defines ‘vanguard art’? Is this something found in the art itself, in its purpose at the time, or its place in history?

Margarita Tupitsyn I could not use the term avant-garde because in Russian modernism it is associated with a specific historical moment. Whereas vanguard is a more universal term that refers not only to artists committed to experimentation, and to the formal and conceptual advancement of the arts, but also evokes the antagonistic atmosphere under which these artists worked during the Soviet period. As a result, I exhumed those moments of free art making/free thinking that in most studies of the Stalin period are dismissed by Socialist realist heavyweights. This has created a false impression that any resistance to the state’s cultural doctrines was overpowered. Moscow Vanguard Art aims to prove that the flame of vanguardist consciousness, established during the period of the early Russian modernism, was burning throughout the twentieth century.

‘Moscow Vanguard Art aims to prove that the flame of vanguardist consciousness, established during the period of the early Russian modernism, was burning throughout the twentieth century.’

YBB 2017 is a key anniversary year for the history of the Russian Revolution and the birth of the Soviet Union. Why have you focused specifically on the period 1922 to 1992 in this book?

MT 1922 commenced a new political and cultural era. The civil war was over, the Soviet Union was established, Stalin became the general secretary, and, paradoxically, capitalist elements were reintroduced into the Soviet economy. It was also the year when nonobjective art—dubbed by Aleksandr Rodchenko as, “Russia’s own art”—was officially presented in the First Russian Exhibition in Berlin. It was also in 1922 that orthodox realists realized that nonobjective art was a threat to their integration into the Soviet culture industry, who consolidated to begin a campaign against nonobjectivists. Realists’ struggle for state funding, support of press and alliance with powerful functionaries, commenced, paving the way to censorship, Socialist realism and later repressions. With fluctuating degrees of intensity, this lasted until perestroika, which led to the collapse of the Soviet Union.

YBB What do you think it was about Moscow during the earlier part of this period that resulted in such a concentration of the ‘vanguard art’ showcased in the book?

MT In the history of Russian twentieth century art, Moscow played a paramount role in the production of radical art forms. Many future avant-gardists were graduates of the Moscow Institute of Painting, Sculpture, and Architecture (MUZhVZ), and artists always made a distinction between Moscow and St. Petersburg, and later between Moscow and Leningrad aesthetics. Post-war artists designated such informal groups, such as the Moscow School of Painting and Moscow Conceptualism. But I chose to concentrate on Moscow artists mainly because they pursued an ambition to resist cultural repressions and thus preserved an uninterrupted genealogy of rebellious modernist traditions. Even during the war, for example, when Leningrad was under siege, and all of the city’s cultural activities were frozen, there was—paradoxically—a more liberal atmosphere in Moscow’s restrictive institutions, such as the Moscow Section of the Union of Soviet Artists (MOSSKh). It was also during the War that Rodchenko mustered up the internal strength to return to abstraction. After the War, Moscow hosted several major exhibitions of American and European art, which had a pivotal impact on the young artists who were prepared to challenge Socialist realism.

‘I chose to concentrate on Moscow artists mainly because they pursued an ambition to resist cultural repressions and thus preserved an uninterrupted genealogy of rebellious modernist traditions.’

YBB You begin with Malevich’s ‘Black Square’ (1915), in a chapter entitled ‘In Defence of Nonobjective Art’. Why did you want to ‘defend’ this movement in art in your study, given that it is perhaps the most easily identified epoch in twentieth century Russian art?

MT Nonobjective art was more then just an art style. It comprised both Constructivist and Suprematist tenets, and, as Liubov Popova stated, was “a revolutionary condition of form.” Thus, an attack on it meant an attack on both the avant-garde and left consciousness. Malevich called on AKhRR—the proto-socialist realists who embarked on fighting nonobjectivists—for a coexistence with other trends, but they wanted mainstream status, and began building the case that nonobjective practices were unfit for the proletariat. As a result, non-objective artists were put in a position where they needed protection from high rank functionaries and mainstream press. In Moscow Vanguard Art, I am telling a story about how this movement was defended as well as who its defenders were.

YBB The book is engaged in the movement beyond non-objective painting, and in the experimentation with film and photography of successive years. How do you weigh up the impact of rapid advancements in technology on the development of art in between 1922 and 1992?

MT To a degree, this was the result of an attack that non-objective artists were submitted to. They had to reinvent themselves in order to create new forms of representational art, diverging from orthodox easelism. Photomontage, cinematography, and graphic design became formally radicalized and put to the service of spreading a message about the first five-year Plan, inaugurated in 1928. This started a post-nonobjective period and prolonged avant-gardists’ mainstream status, which lasted until 1932.

YBB A fascinating aspect of Moscow Vanguard Art is how you deviate from some of the traditional narratives about twentieth century Russian art. What would you say is the most radical argument you put forward in this book? For example, you argue against the claim that the avant-garde’s intellectual elite were to blame for Socialist realism’s authoritative platform.

MT I do not consider my not siding with such ungrounded accusations radical. Such claims should not have even entered the historiography of Russian art and their supporters are guided by speculative intentions and ignore factual details that easily prove the insolvency of this kind of conclusion. In my book, I go into detail to illustrate how avant-garde artists and critics boldly defied Socialist realism throughout the entire Stalin period. To blame anyone but AKhRR artists and their cronies for planting the seeds of cultural repressions and conservatism is misleading, even unethical, given that quite a few avant-garde intellectuals were arrested and executed. To me, the most beneficial aspect of Moscow Vanguard Art lies in its tracing of the political and cultural ups and downs of the Soviet period in one volume and in the fact that this volume ends with nonconformists’ liberation from a cultural prison house. 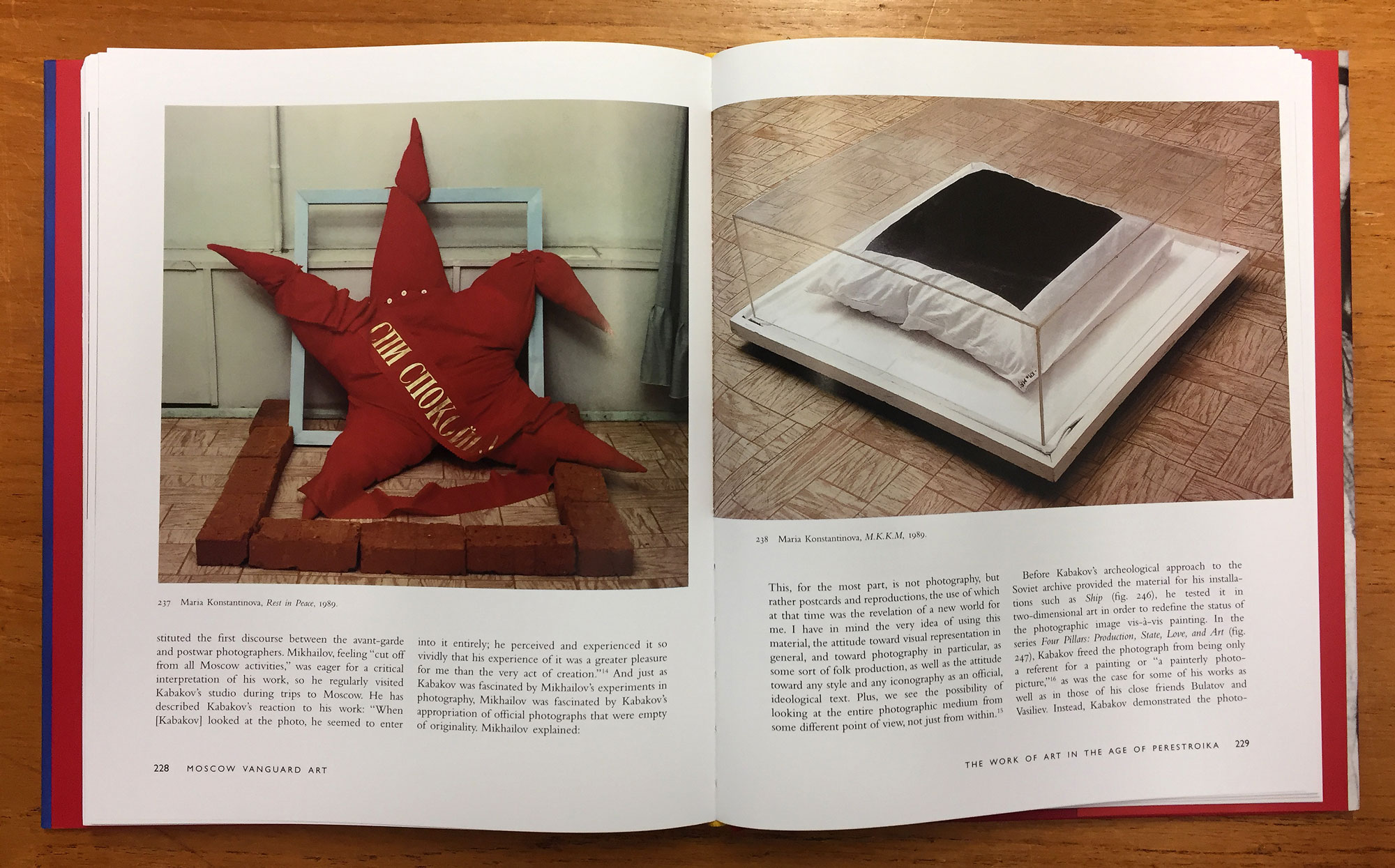 YBB Your work is concerned with how we might look back on the period in question and define Russian modernism. Is it possible to identify key features which can be seen to permeate the three epochs of the Avant-Garde, Socialist Realism and Non-conformist (post-war) art?

MT For me, it is artists’ commitment to experimentation, often under the most unlikely of sociocultural atmospheres—an expression I use as my dedication to all of them. Such steadfastness allowed me to create a unique genealogy of Russian modernism, and, hopefully, it will convince readers that Socialist realism was a glitch in this lineage.

Only since perestroika, have post-war artists been able to travel abroad and have their works taken out of the country.

YBB As with the Tate Modern retrospective of Malevich in 2014 and the more recent exhibition Revolution: Russian Art 1917-1932 at the Royal Academy of Art, London, there is increasing exposure for the Avant-Garde and Socialist Realism movements that you focus on at the beginning of Moscow Vanguard Art. However, people may be less familiar with the period you explore later in the book – the non-conformist art which seemed to break away from the traditional mediums through ‘dematerialisation’. Who are the key players of this movement, and what came to define it?

MT Both the historical avant-garde and nonconformist art have been shown in the West since the 1960s. But only since perestroika, have post-war artists been able to travel abroad and have their works taken out of the country. In the chapters dedicated to the post-war period, I pick up the thread of nonrepresentational art not only because I think this is where the most interesting experiments were made, but also because it was the main stylistic antipode of Socialist realism. Attacks against nonrepresentational art were resumed after abstract work was displayed in the Manezh exhibition in 1962. Painting in a private studio or apartment remained to be the only form of productive escape from official control for at least another decade. By the early 1970s, however, this also became an isolating burden, resulting in artists’ decision to exhibit their paintings in an open field, located in the outskirts of Moscow. Dubbed the Bulldozer Exhibition, it ended with a brutal destruction and/or confiscation of paintings, positioning this medium, and the production of art objects in general as an absurd practice in the eyes of young nonconformists.

YBB Do you identify a connection between non-objective art and this process of dematerialisation in the performance art that came out of the late twentieth century? Is there a shared sense of rejection or negation to be found in the epochs you begin and end with?

MT Both movements defied painting and commodifiable art objects for political reasons. Nonobjective artists believed that proletariats needed entirely new forms of art and means of display, hence Kazimir Malevich applied the Suprematist vocabulary to collective use in public designs, and Aleksandr Rodchenko eliminated the objectness of his Spatial Constructions when he used them as formally inventive titles in Dziga Vertov’s 1920s newsreels. In their turn, performance artists of the 1970s reacted to the lack of audience and exhibition opportunities by committing to the principles of dereified aesthetics and departing to rural (free of danger) spaces. 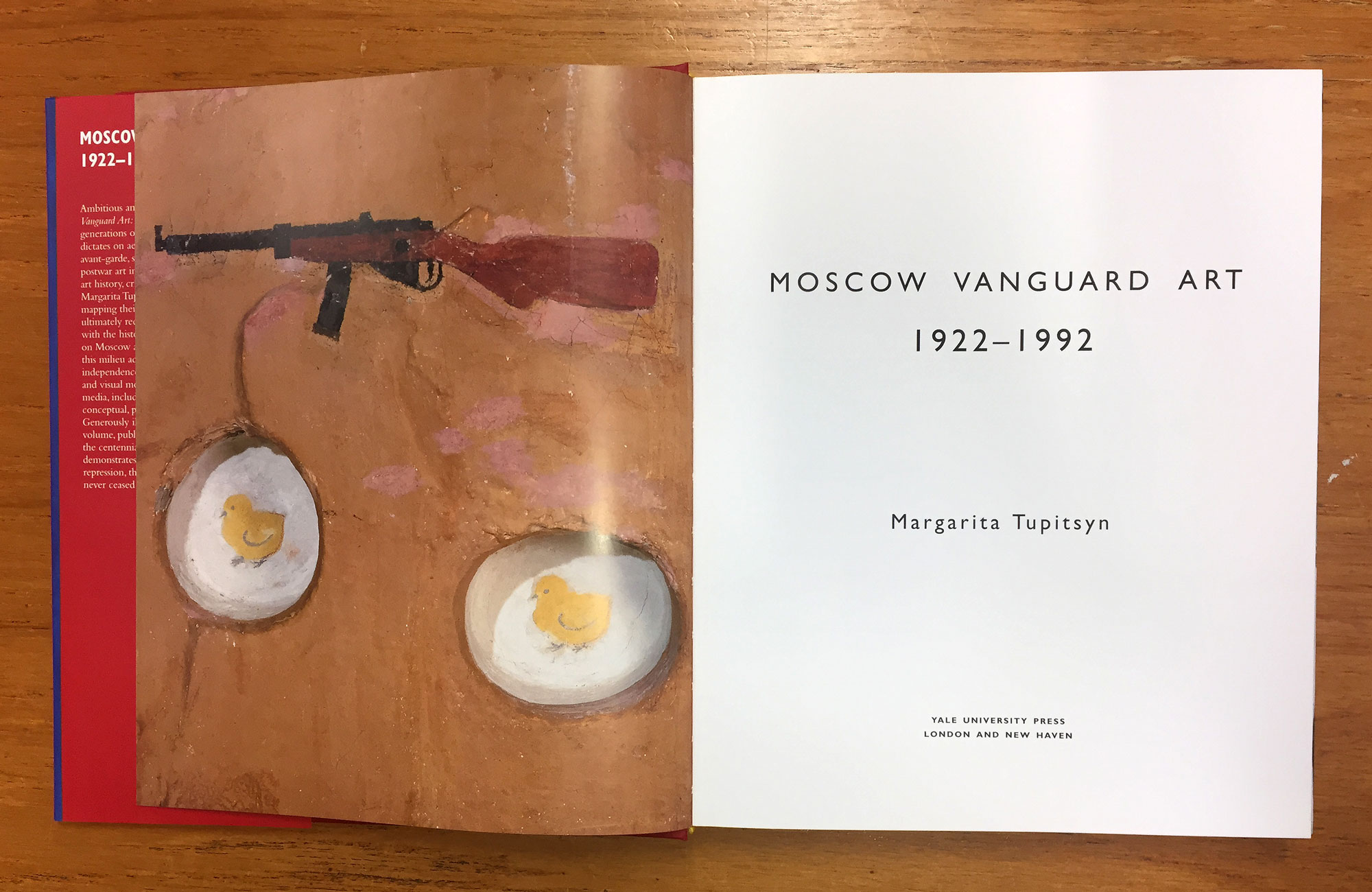 YBB Finally, if we were forced to replace Malevich’s ‘Black Square’ with a lesser-known work of art to speak for the vanguard art movement, what might that be?

MT One such work is Ilya Kabakov’s Machine Gun and Chickens (1966). I chose it as a frontispiece to the book. Kabakov’s seemingly odd juxtaposition is, in fact, an ample depiction of the establishment’s aggression (to a large degree generated by official artists), and the vulnerability of vanguard artists, due to their refusal to succumb to cultural dictatorship. Regardless of how dangerous and hopeless their resistance was at times, they turned out to be much more resolute than their enemy.

Moscow Vanguard Art is available now. To mark the centenary of the Russian Revolution, you can explore other Russian and Soviet art books here.