The Nazi fascination with the occult is legendary, yet today it is often dismissed as Heinrich Himmler’s personal obsession or wildly overstated for its novelty. In Hitler’s Monsters, Eric Kurlander reveals how the Third Reich’s relationship to the supernatural was far from straightforward. Below, he recounts Hitler’s occult beginnings, and how they infiltrated into the propaganda and politics of the Nazi Party.

One day in August 1909 a young man dropped by the Vienna office of the Austrian occultist, Jörg Lanz von Liebenfels. Pale and shabby in appearance, the man politely introduced himself and asked whether he might order some back issues of Lanz’s self-published periodical, Ostara. Lanz’s Ostara was dedicated to propagating an esoteric doctrine, known as Ariosophy, which prophesied the resurgence of a lost Aryan civilisation peopled by a Nordic ‘God Men.’ Touched by his visitor’s sympathetic appearance and earnest demeanor, Lanz offered the young man some copies of Ostara free of charge and two crowns for the street car home. The visitor, according to Lanz’s 1951 memoir, was Adolf Hitler.

Lanz’s recollection may be apocryphal. But in reading any issue of Ostara a young Hitler would have come across multiple themes that found their way, a decade later, into the political program of the Nazi Party: the importance of Nordic blood purity and the dangers of racial miscegenation; the monstrous perfidy of the ‘Jew’; the destructive effects of socialism, liberalism, and feminism; and the mystical power of the Indo-European swastika. Only strict adherence to arcane religious and eugenic practices, Lanz insisted, including the elimination of Jews and sterilisation of the racially inferior, could trigger a reawakening of Nordic civilisation. To illustrate his points, Lanz filled Ostara’s pages with vivid photos of well-muscled Aryan cavaliers defending scantily-clad blonde women from the advances of hideous-looking ‘ape-men’ – all popular tropes in Nazi propaganda of the 1920s and 30s.

As he scraped by in a tiny apartment on Vienna’s Felberstrasse, wiling away his time on watercolour postcards, it is easy to imagine a young Hitler imbibing Lanz’s grandiose racialist (völkisch) cosmology – a world divided into light and darkness, where blonde Nordic heroes were locked in an eternal battle with an army of racial ‘sub-humans.’ By 1909 Germany’s future Führer was, by his own admission, immersed in the broader völkisch subculture to which Lanz belonged. Hitler attended Wagner’s operas dozens of times. He devoured the Pan-German musings of the Austrian politician, Georg von Schönerer. And he praised the demagogic anti-Semitism of Karl Lueger, the long-serving mayor of Vienna (and himself a member of an Ariosophic secret society).

Hitler was not atypical. Millions of Germans and Austrians coming of age during the first decades of the twentieth century shared a broader supernatural imaginary replete with occult and border scientific doctrines, Nordic mythology and Germanic folklore, and pagan, New Age, and völkisch religions. A dizzying array of occult associations, esoteric institutes, and new religious sects sprung up to satisfy Germans’ demand for a ‘science of the soul.’ Those who could not afford to take classes or subscribe to esoteric journals flocked to the thousands of tarot readers, clairvoyants, and astrologers who lined the streets of Berlin, Munich, and Vienna.

These trends only accelerated after Germany’s devastating defeat in the First World War. During the Weimar Republic a steamship company dismissed its managing director because ‘his handwriting had displeased a graphologist.’ Motorists avoided a road between Hamburg and Bremen due to rumours about mysterious ‘terrestrial rays,’ which caused accidents. ‘A miracle worker, who had the faculty of making the dead Bismarck appear during his mass meetings and who healed sickness by application of white cheese,’ recalled the German journalist Konrad Heiden, ‘had enough followers to establish a city: another crackpot was almost elected to the Reichstag; and still a third, who also barely missed election, promised to perform the greatest miracle of all by undoing the German inflation.’ ‘And of course,’ Heiden notes, ‘many were firmly convinced that the course of world history was the sinister result of the ministrations of ancient secret societies, such as those of the Masons, the Jews, and the Jesuits.’

Among the millions of Germans and Austrians who held such views were Rudolf von Sebottendorff and Walter Nauhaus, who co-founded the occult-inspired Thule Society during the last months of the First World War. The Thule adopted an elaborate array of esoteric traditions, including Ariosophic racism and esoteric symbols like the Indo-Aryan Swastika. But its main purpose was to unite all ‘social-national’ elements in creating a Greater Germany devoid of Jews, freemasons, and communists. Within weeks of Germany’s defeat in November 1918 the Thule Society members Anton Drexler and Karl Harrer created the German Workers Party (DAP), which Hitler joined nine months later, changing its name to the National Socialist German Worker’s Party (NSDAP).

Given these political antecedents, should we be surprised that among Hitler’s inner circle were men who practiced astrology, wanted to resuscitate pagan gods, or considered themselves magicians? That Hitler himself, in contemplating how best to manipulate the masses, apparently read a parapsychological tome called Magic in which he underlined sentences such as ‘Satan is the fertilising, destroying-constructing warrior’ and ‘He who does not carry demonic seeds within him will never give birth to a new world’? Is it a coincidence that Joseph Goebbels hired Weimar’s most prolific horror writer, Hanns Heinz Ewers, to fulfil important propaganda tasks for the Nazi Party? Or that leading Nazi stormtroopers allied with the popular clairvoyant, Erik Hanussen, who, at a séance on the night of February 26, 1933 ‘predicted’ the infamous Reichstag Fire, which justified the Nazi imposition of martial law?

As the liberal journalist Rudolf Olden put it in 1932, a year before the Nazi seizure of power, Hitler’s magical thinking may have affected only ‘one half of the people.’ The other found him ‘laughable.’ But the ones that followed Hitler were conditioned to support Nazism by thousands of ‘small’ prophets both inside and outside the NSDAP – the ‘Theosophists, the Anthroposophists, the miracle rabbis… the death rays, the three thousand magicians who live in Berlin alone… the diviners… the astrologers… the many sects, political and medical miracle makers.’ Millions of Germans sought salvation in these ‘proponents of esoteric sciences,’ Olden insisted, these ‘occultists, who speak of unknown powers’ that ‘stream[ed] out of the Führer.’

In taking the supernatural roots of Nazi politics and propaganda seriously, we should not ignore the conventional reasons for the NSDAP’s success. In comparison to other Weimar parties, Hitler and the NSDAP were far more effective at the level of grassroots organising. They were superior when it came to political messaging and utilising modern propaganda techniques as well. And they possessed a wild card that trumped all other political movements on right as well as the left: the genius and charisma of Adolf Hitler.

Despite these important caveats, I want to argue that the Third Reich would have been highly improbable without a widespread penchant for supernatural thinking – exacerbated by military defeat and social crisis – which Hitler and the Nazi Party rushed to exploit. National Socialism was not the first movement to take advantage of people’s faith for political purposes. Hitler’s NSDAP was nonetheless far more effective than other parties in drawing upon a supernatural imaginary to attract a generation battered by war, violence, and sociopolitical dislocation.

Today, as in Germany a century ago, a renaissance in border scientific, faith-based, conspiracy-driven reasoning has begun to correlate with illiberal political and ideological convictions, influencing national elections, domestic social policies, and matters of war and peace. This phenomenon is evident globally, whether in the emergence of neo-fascist (‘alt-right’) groups across Europe and the United States or in the exponential growth and politicisation of fundamentalist Islam and Christianity. Every culture, after all, has its own supernatural imaginary that can, in times of crisis, begin to displace more empirically grounded, nuanced arguments about the challenges that define our socio- and geopolitical reality. It is only by acknowledging the historical pervasiveness and consequences of this kind of supernatural thinking – in the Third Reich and elsewhere – that we might work to counter its influence. 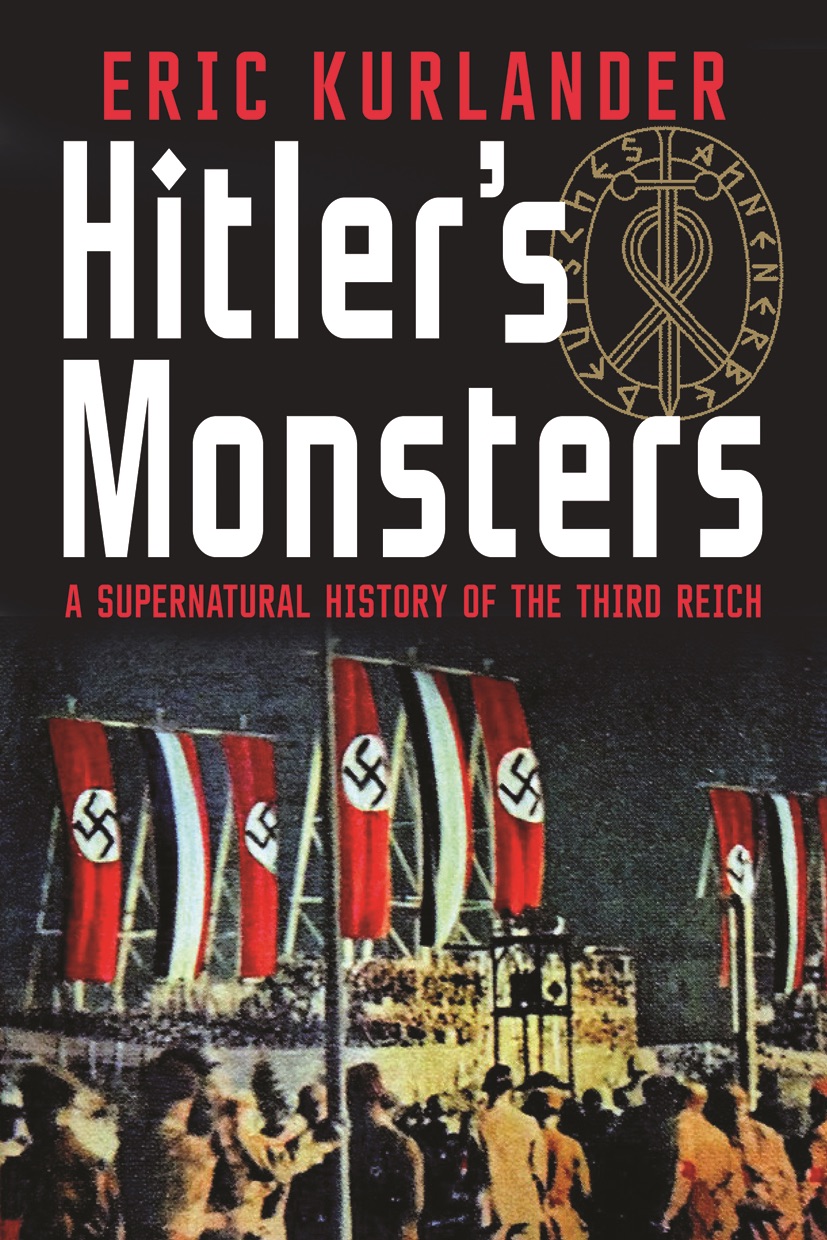 Eric Kurlander is professor of history at Stetson University. His previous books include The Price of Exclusion: Ethnicity, National Identity, and the Decline of German Liberalism, 1989–1933. He lives in DeLand, FL.

Our Bookshop of the Month this month is the beautiful Kemps General Store, which was founded in 2017…