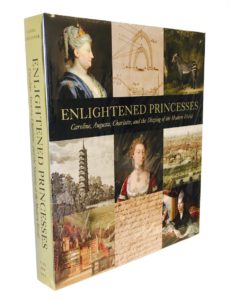 Joanna Marschner introduces her new book Enlightened Princesses, which accompanies a landmark exhibition showcasing the valuable and important possessions of three powerful and significant women of the Enlightenment. Princesses Caroline, Augusta and Charlotte all actively participated in and engaged with significant advancements of the eighteenth century. Presented by Historic Royal Palaces and the Yale Center for British Art, the exhibition at Kensington Palace (open until 12 November 2017) illuminates the inner lives of these three remarkable women.

This book sets out to explore the contribution made by three German princesses who by reason of their Protestant faith and their dynastic capital were selected as wives for the men who ruled Great Britain over the course of the long eighteenth century.

In 1714 Queen Anne died without leaving an heir. The throne passed to George, Elector of Hanover, who could trace his ancestry back to King James I and VI, who had ruled England and Scotland a hundred years earlier. Importantly the new king was Protestant in fulfilment of the essential criteria of the Act of Settlement drawn up by Parliament in 1701 which laid down the rules governing the royal succession. To ensure acceptance and success for the new dynasty it was just as important that the Hanoverian monarchs chose Protestant brides.

Caroline of Brandenburg-Ansbach, the wife of the future King George II, arrived in London in 1714, when the first Hanoverian king, George I was crowned. She became Queen Consort after her husband succeeded his father to the throne in 1727. Augusta of Saxe-Gotha was married to Caroline’s eldest son, Frederick, Prince of Wales, but never became queen as her husband died young. However as mother to the next king, George III, she was crucial to the shaping of his reign. In 1761 George III married Charlotte Mecklenburg-Strelitz, who died in 1818, two years before her husband.

The lives of the Hanoverian kings have been much studied by historians for their part in the shaping of the political, economic and cultural life of the nation, but their consorts have received little attention. However as women of power and influence they too deserve to be scrutinised.

Between 1727, when Caroline was crowned as Queen Consort, and the death of Charlotte in 1818, Britain had developed as a global power, shaped in part by the energy and agency of the women who are the subject of this exhibition. While navigating the constraints of arranged marriages, traditional attitudes to their gender, and their position as consort, rather than ruler, they used information garnered during their upbringing in Europe to develop and exercise their role with creativity and determination. But as they seized the opportunities presented within Britain, their new homeland, and its imperial interests in the wider world, from the vantage point of our own time, they became complicit in the unjust appropriation of territory and the exploitation of the enslaved and disenfranchised.

This exhibition, and the accompanying book, seeks to redeem a place for Caroline, Augusta and Charlotte, whose actions, for better, or for worse, contributed importantly to shaping the fabric of society in their own era, and continues to touch our present world.

This exhibition, and the accompanying book, seeks to redeem a place for Caroline, Augusta and Charlotte, whose actions, for better, or for worse, contributed importantly to shaping the fabric of society in their own era, and continues to touch our present world. For Caroline, Augusta and Charlotte, the court operated as a stage, not only for the performance of music, dance and theatre, but also as a political and cultural arena. In the furnishing of these spaces, the princesses constructed a visual statement of the authority of the Hanoverian dynasty, under which the patronage of the arts would flourish. At the same time they had to navigate the inherently political nature of public and private life at court, during a period that witnessed an information revolution, initiated by the mass circulation of newspapers, journals and magazines replete with commentary, debate and critique.

At the heart of their social circles, Caroline, Augusta and Charlotte built relationships with the leading cultural and intellectual figures of their age, including politicians, clergymen, philosophers, gardeners, architects, authors, playwrights and composers. The princesses‘ interests often overlapped or had common focus, such as in science, medicine, philanthropy and especially maternity as well as the commercial interests of the state in Britain and abroad.

Over the lifetimes of Caroline, Augusta and Charlotte attitudes to child-rearing changed rapidly. There were shifts in methodology and focus in response to evolving contemporary philosophies about childhood, sentimentality, and individual freedoms. The princesses were active contributors to the educational programmes devised for their children, and sought to draw them into experiences beyond the palace walls. In their public roles as encouragers and protectors, the princesses were involved in ambitious and wide-reaching public philanthropic projects, especially those connected to health and social welfare. 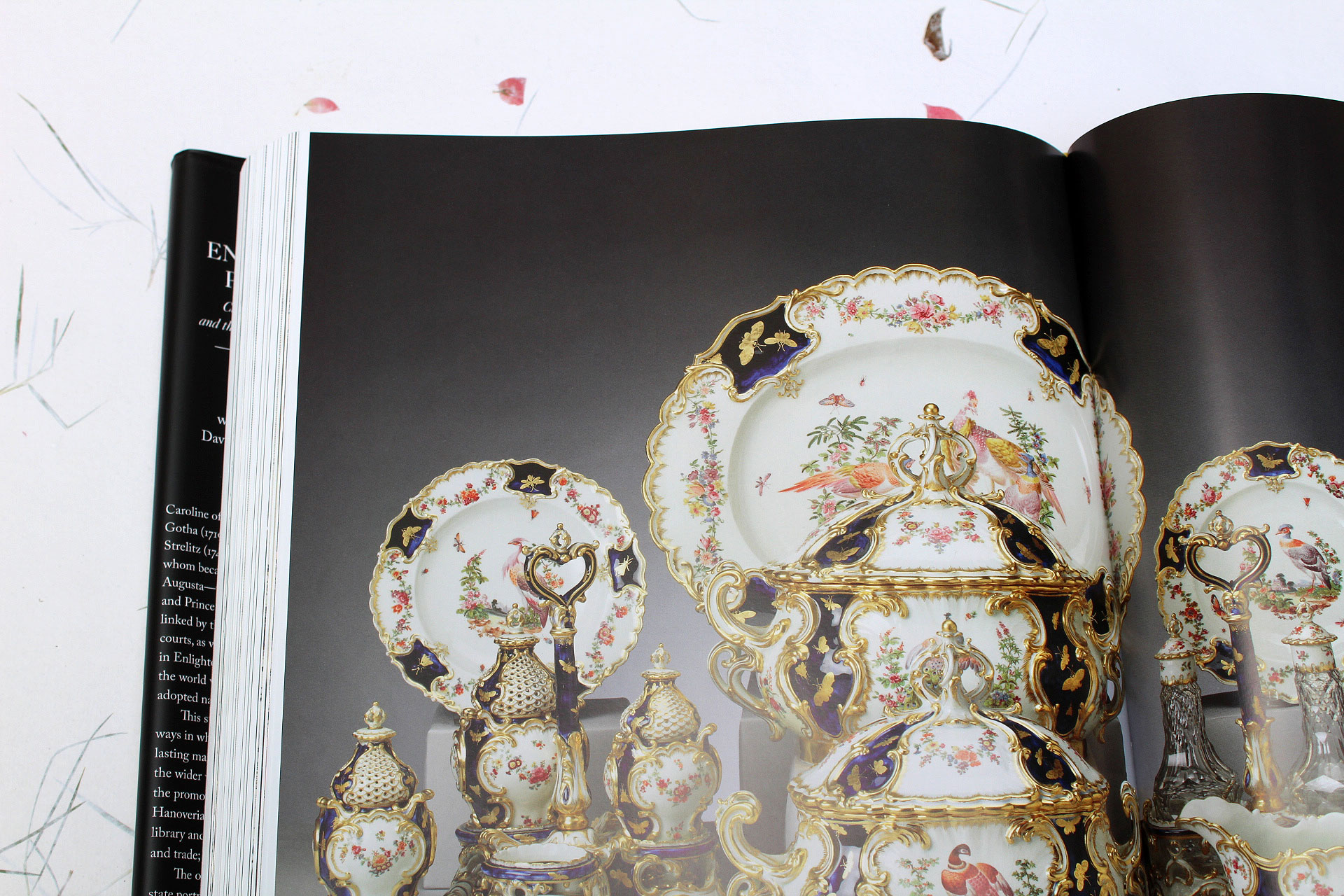 Caroline, Augusta and Charlotte created and recast each other’s gardens, which were political and social spaces, as well as private retreats. They drew in the products of empire – plants, birds and animals were collected from many continents, not only for their beauty and rarity but also for their economic value. In the design of their gardens, the princesses explored contemporary garden philosophies and exercised their architectural ambitions. Many of their landscapes were made to be shared, not just with the community of gardeners, philosophers, and scientists the princesses drew into their circle but with a wider community, fostering a new relationship between monarch and subject.

To support the arts and sciences, Caroline, Augusta and Charlotte championed national products, and allowed their interest to be used by enterprising industrialists. The development of advanced industrial technologies – including cloth weaving, porcelain production and metal casting – enabled mass-production of consumer goods. This ensured, for the first time, that the image of the British monarchy was widely disseminated in a way recognised as a ‘brand’ to domestic and international audiences. Additionally, Britain’s increased colonial expansion following the American War of Independence resulted in heightened interest in the fruits of empire, which the princesses celebrated by furnishing their home and developing their gardens with imports from the Caribbean, India, Africa, China and Australasia.

The lives of the three princesses spanned a dynamic century, which saw a flourishing of the arts, dramatic advances in scientific and medical knowledge, new models of charity and concern for the welfare of the state, as well as industrial and imperial expansion on an unprecedented scale. Each princess engaged with the advances and assets of the age, and the legacy this has left has been far-reaching, and by turn, enriching, troubling and enduring.

Enlightened Princesses is published now, and the exhibition at Kensington Palace is showing until November 2017.

The Skin of Chaos: The Letters of Adonis and Adel Abdessemed, pt. 2

Presented exclusively by YUP in anticipation of the publication of Adonis’ newest book, Concerto al-Quds, We are delighted to…