President Trump’s agenda has borrowed heavily from Reagan. Tax cuts, a military buildup, and even the slogan “Make America Great Again” were all signatures of the 1980 presidential campaign, noisily repackaged for a new age. Within a day of assuming office, Trump revealed a further resonance with Reagan’s platform, echoing the former president’s intention to “unleash” a CIA constrained by bureaucracy. While visiting Langley, Trump accused the previous administration of not having always given the CIA the backing it required, and promised to grant the agency “1000 percent” support in “leading the charge” against “radical Islamic terrorism.”

The criticism that Obama did not do enough to support the CIA might seem strange for a president so associated with the agency’s expansive drone campaign. Over the former president’s two terms, the CIA oversaw an estimated 375 strikes in Pakistan’s frontier provinces. Yet despite the enormous increase in the scale and tempo of the agency’s campaign, the Obama administration had retained the collaborative partnership Langley had first established with the United States Air Force in the late 1990s when Predator drones were employed in the agency’s hunt for Osama bin Laden. Under this arrangement the CIA directed the strikes, but the Air Force retained responsibility for piloting the aircraft and pulling the trigger. Within weeks of his visit, Trump delivered on his promise of empowerment, overturning this combined approach and granting the CIA the authority to execute its own strikes.

What is the Trump administration’s motivation for overturning the well-established relationship between the CIA and the Air Force? For critics the decision may seem like little more than a cynical attempt to bypass the safeguards the previous administration had established. Under pressure from human rights and legal groups, and conscious of the legacy he was leaving, Obama had sought to address some of the biggest criticisms related to his two terms of drone warfare, namely the proliferation of targeted killing, erosion of international norms and standards, and the lack of transparency surrounding strikes and their casualties. His administration’s efforts to bring drone warfare out from the shadows were first codified in the 2013 Presidential Policy Guidance, which established strict targeting criteria, and expanded upon in the closing months of his presidency by Executive Order 13732, which committed future administrations to publicly producing annual casualty reports.

Authorising the CIA to undertake its own strikes theoretically removes these actions from the public disclosure required by Title 10 of the U.S. Code, under which the Pentagon operates. Instead, actions can be concealed behind the CIA’s specialist Title 50, which authorises covert action. In reality however, prior to Trump’s decision both the Bush and Obama administrations relied upon an exploitative hybrid, leaning upon the Air Force to provide legal authority for lethal action, while using the CIA’s Title 50 rights to render details about such strikes classified. It was not until his final months in office that Obama challenged this abuse. Rather than a dramatic change to established practices of secrecy, Trump’s move represents a rejection of the Obama administration’s belated attempt to set new standards that it hoped the next administration would meet, and possibly improve upon.

The more significant motive behind the Trump administration’s decision to authorise the CIA to undertake strikes is its determination to accelerate the pace of the United States’ campaign against what it collectively describes as “radical Islamic terrorism.” The consensus view held among Trump’s closest advisers is that the ponderous caution exercised by his predecessor enabled groups like the Islamic State of Iraq and Syria (ISIS) to expand. Thus Obama’s guidelines were regarded as little more than bureaucratic red tape, binding U.S. forces with collateral damage assessments and casualty reports, and limiting the nation’s ability to bring its full force to bear against the so called “global jihadist movement.” Consequently, the decision is better understood in the wider context of the administration’s reforms to the way the War on Terror is being fought. The White House has set out to transform America’s counterterrorism operations from a centralised effort led by the Executive to an approach where greater authority is delegated to the Pentagon and Langley to empower commanders on the ground to sanction their own operations, be they drone strikes or other kinds of counterterrorism activity.

That is not to say that Trump’s decision should not ring alarm bells. One of the strongest cases for the sort of transparency Obama belatedly sought to introduce is the added incentive to exercise caution and limit civilian casualties. As revealed by the Trump administration’s disastrous Yemen raid in which twenty-three civilians and a Navy SEAL were killed, and the unprecedented civilian casualties caused by recent coalition air strikes on Mosul, the combination of increased tempo, delegated authority, and limited transparency can have an extremely negative impact upon efforts to limit civilian casualties.

It would be inaccurate however to assume that because Trump has sought to return the CIA’s drone warfare to the shadows that the automatic consequence will be higher civilian casualties. The decision, while doubtless intended to be part of the administration’s tempo-increasing streamlining, overlooks the fact that Langley has long had different targeting criteria to those employed by the Pentagon, reflecting the different cultural attitudes and roles of the two bodies. The Pentagon—as a warfighting organisation—uses “reasonable certainty” to validate targets when operating within warzones, enabling it to respond quickly to threats but with a higher proportion of risk. The CIA however—as an intelligence agency whose strikes often take place outside of warzones—relies upon “near certainty” for their targets, a standard which can take weeks or months longer than a typical Pentagon operation to achieve.

The most striking distinction between the way the CIA and Pentagon operate their drones has most recently been revealed in Yemen. At the Pentagon’s request, Trump designated large swaths of the country “areas of active hostilities,” where looser battlefield rules apply. This, combine with the delegation of authority to commanders has seen the small desert country pounded with over 80 confirmed drone strikes in Trump’s first months in the White House, from which the Bureau of Investigative Journalism reports as many as 25-30 civilians may have perished. By comparison the CIA has launched just two strikes in the Pakistan border region their drones patrol, with no confirmed civilian casualties. While availability of targets doubtless has an impact on the significant difference between these two campaigns, one should not overlook the methodological differences at play between the Pentagon’s campaigning and that conducted by targeters at Langley.

Further evidence of the CIA’s more methodical approach to drone strikes was revealed when the Obama administration explored the possibility of transferring responsibility from the CIA to the Department of Defence in 2013. Lawmakers in the Senate Intelligence Committee, who were concerned that the military lacked the necessary intelligence-gathering capabilities to ensure the same degree of precision, opposed the move. The CIA, argued the committee’s chair Diane Feinstein, had proven itself capable of exercising “patience and discretion specifically to prevent collateral damage.” Thus, while Trump’s decision reflects a retrospective step in terms of transparency and government accountability, the more meticulous approach of Langley’s terrorist hunters should be regarded as a positive policy development at a time when the Executive’s desire for quick results and greater appetite for risk has already seen a troubling rise in civilian casualties. 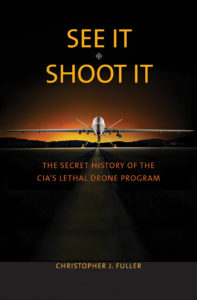 Christopher J. Fuller is lecturer in modern American history in the faculty of humanities at the University of Southampton. He lives in Southampton, UK.

Literature in Translation from Yale