Patti Every now and then, I hear teachers lament that today’s children have changed. And they are right. In the West, this generation of children exhibits significant developmental differences that distinguish them from generations that grew up without television, video games, and smartphones. Today’s children are more self-confident, more assertive, and somewhat more narcissistic than earlier generations. They engage in sexual relationships at younger ages, and they also demonstrate vastly improved spatial intelligence compared to earlier generations. And while it remains a subject of debate whether today’s children have more mental health problems than previous generations, prescription medication for health problems like ADHD and depression has soared in the past decades.

Increases in media use

It’s undisputed that childhood in the twenty-first century is radically different than childhood in any generation before. But are these differences due to avid use of screens? Screen use has undeniably increased in the past decades. Teens aged ten to fifteen spend an average of six hours per day with screens—two of which are spent with social media such as Snapchat and Instagram. This is not even counting the time they use media at school. And even the zero-to-two age group, the so-called “diaper demographic,” spend nearly two hours per day with a screen.

Children’s media environment has also changed dramatically. Just look at a movie like Zorba the Greek (1964), starring Antony Quinn, my favourite movie when I was a young teen. A couple of years ago, I watched it again, and I can’t tell you how disappointed I was with the tediously slow pace and the simplistic story line. Today’s media are fast-moving, with multiple cuts and scene changes, complicated plots, and multiple parallel story lines. Even children’s educational programs, such as Sesame Street, have literally picked up the pace. It is no surprise, therefore, that the increases in spatial intelligence and the presumed increases in ADHD among youth have been attributed to this complex and fast-paced media environment.

Is media technology the cause?

Children have changed, their media habits have changed, and the media environment has changed. An important question is whether these media-related changes are responsible for the changes within children, and the answer is yes. Thousands of studies have demonstrated that media can have both positive and negative effects on children (and adults!). Socialising via social media can increase self-esteem, playing video games can stimulate spatial intelligence, and exposure to violent television or games can lead to aggressive or ADHD-like behaviour.

But there are many “ifs” and “buts.” After all, not only have children’s media habits changed; so have many other factors, not least of which are parent-child relationships. Until the 1960s, the most common parenting style was authoritarian. Parents demanded obedience and respect from their children. In today’s families, parents value their children’s input and encourage them to speak up. Understanding, equality, and compromise are now paramount. Like media, this “autonomy-supportive” parenting can also affect childhood development, and thus it is a viable rival explanation for many of the changes we see in today’s generation.

What I’ve seen time and time again in our research is that all media effects, whether positive or negative, are statistically small. This is due not only to the many competing influences from parents, peers, and teachers, but also because not all children are equally susceptible to the effects of media. About 5 to 10 percent of children may be particularly susceptible to the negative effects of media. These children are, for example, prone to become addicted to games, being bullied online, or becoming aggressive when they play violent games. For this minority of children, media use can have major consequences for themselves and their families.

Media content matters, of course. Content that is violent, horrific, or highly sexualised can lead to increased aggressive behaviour, fear, and unhealthy sexual attitudes. But content that features educational or pro-social messages can foster academic and social-emotional learning.

Last but not least, media effects do not occur in a vacuum. Parents matter greatly. How parents raise their children plays a crucial role in how their children develop into adults. This also holds for media-specific parenting. Parents and educators can bolster the positive effects of media content and counteract or mitigate the negative effects. But knowing how and what to do is not simple. Indeed, in our always-on, always-plugged-in culture, this will be a key challenge for all of us. 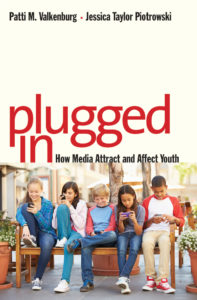 An A-Z of the World – E. H. Gombrich on: the Enlightenment