To mark the publication of Stephen D. King’s Grave New World: The End of Globalization, The Return of History, we chatted to Stephen about the implications of globalization, and what the return of history means for the western economy and nation states. 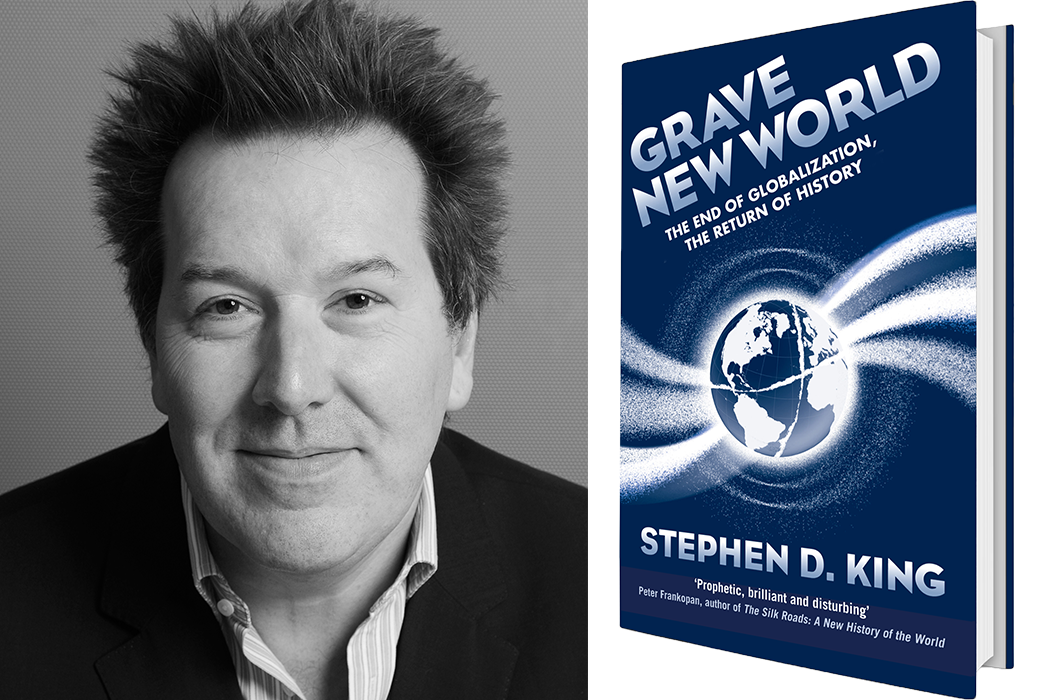 1. The subtitle of Grave New World is The End of Globalization, The Return of History. Could you explain what you mean by the return of history?

It’s primarily a response to Francis Fukuyama’s famous claim in 1989 that we were approaching ‘the end of history’. He argued that western liberal democracies and free market capitalism had effectively triumphed over all other political systems. As the Cold War came to an end, it was a claim that carried remarkable resonance. Western values were, apparently, on the verge of spreading throughout the world, thanks somewhat to the forces of globalization. Borders would steadily shrink to take advantage of new economic opportunities.

In part, the argument was true. Economic opportunities did spread thanks in particular to the enhanced mobility of capital. Parts of the world that had been economically-dormant began to take off. China was the most obvious example. In 1980, China’s living standards were the equivalent of those in the US in the late 18th Century. By 2010, they had risen to US levels in the 1930s. This extraordinary economic transformation, however, created an obvious problem for the ‘end of history’ mantra. China may have been economically successful but it certainly wasn’t a liberal democracy.

Indeed, at the beginning of the 21st Century, it increasingly appeared that western values, if anything, were in retreat. Russia’s experiment with liberal democracy proved short-lived yet Vladimir Putin was enormously popular at home. The emergence of other successful ‘strongmen’ – including Erdogan in Turkey and Duterte in the Philippines – suggested that autocracy wasn’t dead. And, following the global financial crisis – which, in truth, was more a transatlantic financial crisis – the west’s own love affair with globalization was turning sour.

Economists have a habit of ignoring all but the most recent history, often because the data they use typically spans only years, not decades or centuries. They also, in general, tend to be in favour of open borders based on the not unreasonable observation that borders are no more than an obstacle to be overcome in the pursuit of economic efficiency. Yet what might be regarded as economically desirable doesn’t always correspond with the choices societies make. The ‘return of history is, thus, a response not only to Fukuyama’s 1989 thesis but also to those many economists who choose not to take on board the lessons from the past. And one of those lessons is simply that globalization is not ‘one-way’ traffic, driven entirely by technological progress. Institutions and ideas are far more important in determining whether economic connections are maintained, a conclusion nicely illustrated by the uncertainty regarding the UK’s relations with the rest of Europe following the June 2016 vote in favour of Brexit.

2. You mention that globalization brings discomfort to nation states. What is the main reason behind this feeling?

It doesn’t always. After all, the period from the 1950s through to the 1990s might best be described as a ‘golden age’ for globalization. Under the sponsorship of the US – which acted as a sometimes-reluctant imperium – a series of international institutions helped ‘set the rules’ for at least parts of the world economy. Without the IMF, the World Bank, the European Union, GATT and NATO, it’s unlikely that world trade would have flourished in the 1950s and 1960s. And even when there was financial chaos in the 1970s, international institutions were able to place a steady hand on the tiller.

Globalization is, however, a very useful scapegoat during hard times. Even before the global financial crisis, some western economies had started to slow. As they did, it became more and more difficult for politicians to be able to meet the promises they had made to their voters on pensions, healthcare, education and taxes. Worse, in some countries, slower growth and falling house prices helped shine a spotlight on rising income and wealth inequality. This was particularly so in the US, allowing Donald Trump to launch a presidential campaign focusing on the so-called ‘forgotten people’.

A new narrative began to emerge, one that only threatened to make itself felt in earlier decades. Suddenly, it was easier to blame ‘the other’ for a country’s difficulties.

A new narrative began to emerge, one that only threatened to make itself felt in earlier decades. Suddenly, it was easier to blame ‘the other’ for a country’s difficulties. The nation state apparently offered sanctuary, stability and security in an otherwise-uncertain world. And there was little that the world’s ‘elites – those who typically felt more comfortable in Davos than, say, downtown Detroit – could do about it. After all, they appeared to be the biggest financial winners from globalization so, whatever their views, they were not to be trusted. Mainstream politicians suddenly found themselves under attack from populists who were more than happy to take advantage of the new nationalism, even if the historical evidence suggested that reversals of globalization have often been unpleasant affairs.

3. This discomfort is just one of the challenges to globalization that you outline in your work, but are there any other factors that would have a similar, if not bigger effect?

I’ll offer two 21st Century ‘wildcards’, factors that are beyond the control of any one nation or government.

The first is the impact of mass migration. This may stem from a demographic revolution already under way in sub-Saharan Africa. To take just one example, Nigeria’s population has already risen to approaching 200 million from just 38 million in 1950 yet the United Nations estimates that Nigeria’s population could rise above 700 million by the end of the century, making it one of the most populous nations on the planet. Africa as a whole may account for 40 per cent of the world’s population by then. That raises two big challenges. First, history suggests that people will choose to move to take advantage of better opportunities elsewhere. Given the gap between western incomes and those in Africa, it’s quite possible that we’ll see a mass movement of people across the Mediterranean in coming decades, whether Europe is ready or not. Second, the international institutions created at the end of the Second World War are losing their relevance given these extraordinary population shifts. Yet how they might be reformed – or, indeed, replaced – has hardly been discussed.

We’re beginning to discover that the internet is not so much about truth but, instead, the reinforcement of existing beliefs.

The second wildcard is technology. While the costs of communication are falling at a rate of knots and we can connect ever more easily with people all over the world, technology is also leading to the ‘herding’ of ideas. Those with the most extreme views can more easily find likeminded souls. Those who gain their knowledge of current affairs from the internet may not realize that their own political biases are being reinforced by some kind of infernal algorithm. Those who hope to achieve political office either become ever more risk averse, fearing that past misdemeanors will come back to haunt them before they have a chance to lead their mainstream political party, or end up attempting to subvert the existing political order by taking advantage of ‘fake news’ in a post-truth society. We’re beginning to discover that the internet is not so much about truth but, instead, the reinforcement of existing beliefs. It is in danger of becoming a vehicle for prejudice and hate, not for conformity around a common set of values.

4. What main impact do you think that the return of isolationism and protectionism, or history, will have for the western economies?

It’s not impossible to imagine a world that returns to the imperial rivalries of the 19th Century. With the US in retreat, globalization has lost its main sponsor. History suggests that, in this vacuum, other countries will attempt to take hold of the globalization narrative for their own aims. Indeed, in Davos this year, China’s President Xi spoke enthusiastically about China’s desire to lead ‘economic globalization’ in the 21st Century. Yet China’s globalization will be an extension of its ‘Belt and Road’ initiative, one that focuses on China’s own development plans and which attempts to secure stronger economic relations with the rest of Asia. It’s not impossible under this scenario to imagine a real life version of the rivalries in George Orwell’s 1984 between Oceania, Eurasia and Eastasia, which might just as easily be described as the US, Russia and China. As for Europe, it’s in danger of being caught between the post-Columbus world that, since the Second World War, has been shaped by the US and a pre-Columbus world based on the Silk Roads of old.

Grave New World: The End of Globalization, The Return of History is available to buy here.

Stephen D. King is a specialist adviser to the House of Commons Treasury Committee and senior economic adviser at HSBC.

Friday 8 May is the 70th anniversary of VE Day, the date that marked the end of the…