Mindfulness meditation in the West has become a common practice. Many of its Western practitioners, however, do not identify as Buddhist. In this thought-provoking extract from his new book, Stephen Batchelor explores what secular Buddhism means for him.

Extract from Chapter 3: ‘Thinking Out Loud’

I am a secular Buddhist. It has taken me years to fully ‘come out’, and I still feel a nagging tug of insecurity, a faint aura of betrayal, in declaring myself in these terms. As a secular Buddhist my practice is concerned with responding as sincerely and urgently as possible to the suffering of life in this world, in this century (our saeculum), where we find ourselves now and future generations will find themselves later. Rather than attaining nirvana, I see the aim of Buddhist practice to be the moment-to-moment flourishing of human life within the ethical framework of the eightfold path here on earth. Given what is known about the biological evolution of human beings, the emergence of self-awareness and language, the sublime complexity of the brain, and the embeddedness of such creatures in the fragile biosphere that envelops this planet, I cannot understand how after physical death there can be continuity of any personal consciousness or self, propelled by the unrelenting force of acts (karma) committed in this or previous lives. For many—perhaps most—of my coreligionists, this admission might lead them to ask, ‘Why, then, if you don’t believe such things, do you still call yourself a “Buddhist”’?

Rather than attaining nirvana, I see the aim of Buddhist practice to be the moment-to-moment flourishing of human life within the ethical framework of the eightfold path here on earth.

I was neither born a Buddhist nor raised in a Buddhist culture. I grew up in a broadly humanist environment, did not attend church, and was exempted from ‘scripture’ classes, as they were then called, at grammar school in Watford. At the age of eighteen I left England and travelled to India, where I settled in the Tibetan community around the Dalai Lama in Dharamsala. I became a Buddhist monk at the age of twenty-one and for ten years underwent a formal monastic education in Buddhist doctrine, philosophy and meditation. Even in the wake of the 1960s this was considered a highly unconventional career path. Buddhism, when it was mentioned at all in those days, was dismissed by mainstream Western media as a marginal though benign spiritual preoccupation of ex- (or not-so-ex-) hippies and the occasional avant-garde psychiatrist. I would have dismissed as a fantasist anyone who told me that in forty years’ time Buddhist meditation would be available on the British National Health Service and that a U.S. congressman (Tim Ryan, Dem.) would publish a book called A Mindful Nation: How a Simple Practice Can Help Us Reduce Stress, Improve Performance, and Recapture the American Spirit.

Buddhism has its origins in fifth century BCE India and eventually spread throughout the whole of Asia, but it was not until the middle of the nineteenth century that Westerners had any inkling at all of what it taught and stood for. The abrupt discovery that Gotama Buddha was a historical figure every bit as real as Jesus Christ, whose influence had spread just as far and wide, came as a shock to the imperial conceits of Victorian England. While a tiny handful of Europeans converted to Buddhism from the late nineteenth century onward, it was only in the late 1960s that the dharma started to spread rapidly in the West. In contrast to Christianity, which slowly and painfully struggled to come to terms with the consequences of the Renaissance, the European Enlightenment, natural science, democracy and secularisation, Buddhism was catapulted into modernity from deeply conservative, agrarian societies in Asia, which had been either geographically remote or cut off from the rest of the world through political isolation. When Buddhist communities collided with modernity in the course of the twentieth century, they were unprepared for the new kinds of questions and challenges their religion would face in a rapidly changing global and secular world.

I suspect that a considerable part of the Western enthusiasm for things Buddhist may still be a romantic projection of our yearnings for truth and holiness onto those distant places and peoples about which we know the least. I am sometimes alarmed at the uncritical willingness of Westerners to accept at face value whatever is uttered by a Tibetan lama or Burmese sayadaw, while they would be generally sceptical were something comparable said by a Christian bishop or Cambridge don. I do believe that Buddhist philosophy, ethics and meditation have something to offer in helping us come to terms with many of the personal and social dilemmas of our world. But there are real challenges in translating Buddhist practices, values and ideas into comprehensive forms of life that are more than just a set of skills acquired in courses on mindfulness-based stress reduction and that can flourish just as well outside meditation retreat centres as within them. Buddhism might require some radical surgery if it is to get to grips with modernity and find a voice that can speak to the conditions of this saeculum.

I do believe that Buddhist philosophy, ethics and meditation have something to offer in helping us come to terms with many of the personal and social dilemmas of our world.

So what sort of Buddhism does a self-declared ‘secular Buddhist’ like myself advocate? For me, secular Buddhism is not just another modernist reconfiguration of a traditional form of Asian Buddhism. It is more radical than that: it seeks to return to the roots of the Buddhist tradition and rethink Buddhism from the ground up.

My starting point is to bracket off anything attributed to the Buddha in the canon that could just as well have been said by a Brahmin priest or Jain monk of the same period. So when the Buddha says that a certain action will produce a good or bad result in a future heaven or hell, or when he speaks of bringing to an end the repetitive cycle of rebirth and death in order to attain nirvana, I take such utterances to be determined by the common metaphysical outlook of that time rather than reflecting an intrinsic component of the dharma. I thus give central importance to those teachings in the Buddha’s dharma that cannot be derived from the worldview of fifth century BCE India.

Tentatively, I would suggest that this ‘bracketing’ of metaphysical views leaves us with four distinctive key ideas that do not appear to have direct precedents in Indian tradition. I call them the four P’s:

Some time ago I realised that what I found most difficult to accept in Buddhism were those beliefs that it shared with its sister Indian religions Hinduism and Jainism. Yet when you bracket off those beliefs, you are left not with a fragmentary and emasculated teaching, but with an entirely adequate ethical, philosophical and practical framework for living your life in this world. Thus what is truly original in the Buddha’s teaching, I discovered, was his secular outlook.

Above all, secular Buddhism is something to do, not something to believe in. This pragmatism is evident in many of the classic parables: the poisoned arrow, the city, the raft—as well as in the Buddha’s presentation of the four noble truths as a range of tasks to be performed rather than a set of propositions to be affirmed. Instead of trying to justify the belief that ‘life is suffering’ (the first noble truth), one seeks to embrace and deal wisely with suffering when it occurs. Instead of trying to convince oneself that ‘craving is the origin of suffering’ (the second noble truth), one seeks to let go of and not get tangled up in craving whenever it rises up in one’s body or mind. From this perspective it is irrelevant whether the statements ‘life is suffering’ or ‘craving is the origin of suffering’ are either true or false. Why? Because these four so-called truths are not propositions that one accepts as a believer or rejects as a nonbeliever. They are suggestions to do something that might make a difference in the world in which you coexist with others now.

Therefore ‘enlightenment’—though I prefer the term ‘awakening’—is not a mystical insight into the true nature of mind or reality (that always weirdly accords with the established views of one’s particular brand of Buddhism) but rather the opening up of a way of being-in-this-world that is no longer determined by one’s greed, hatred, fear and selfishness. Thus awakening is not a state but a process: an ethical way of life and commitment that enables human flourishing. As such it is no longer the exclusive preserve of enlightened teachers or accomplished yogins. Likewise, nirvana—that is, the stopping of craving—is not the goal of the path but its very source. For human flourishing first stirs in that clear, bright, empty space where neurotic self-centredness realises that it has no ground to stand on at all. One is then freed to pour forth like sunlight.

Stephen Batchelor is a teacher and scholar of Buddhism. He trained as a monk for ten years in traditional Buddhist communities and now presents a secular approach to Buddhist practice. He is the author of the bestselling Buddhism without Beliefs, as well as After Buddhism, coming in paperback next month. 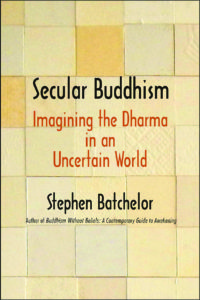 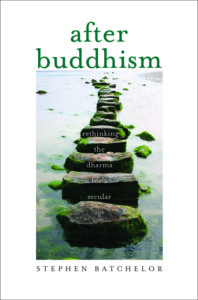 The Philosophy of Friendship

A central bond, a cherished value, a unique relationship, a profound human need, a type of love. What…