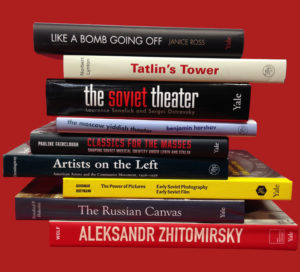 2017 marks a century since the revolutionary year that brought about the fall of the Russian Empire and ushered in the rise of the Soviet Union. In February (now March according to the modern calendar) 1917, the first of two Russian revolutions erupted as a challenge to the Tsarist autocracy which had governed Russia for more than four centuries.

Book-ended by the February and October revolutions, the year 1917 is seen as one of great turbulence and change. By dismantling the Russian Empire and replacing it with the Soviet Union, the revolutionaries brought about monumental change for the people of Russia, and with this political upheaval came an artistic outpouring. The arts were used both to propagate the message of regime change, as well as to respond to the new order. Soviet propaganda took advantage of new technologies in film and photography, while artists and theatre makers sought opportunity through revolution to make original and dynamic works in the face of totalitarian rule.

This spring, Revolution: Russian Art 1917-1932, at the Royal Academy of Arts London, marks ‘the historic centenary by focusing on the 15-year period between 1917 and 1932 when possibilities initially seemed limitless and Russian art flourished across every medium’.

We’ve brought together our own list of books that chart this period of change. Both the propaganda of the Soviet regime and artistic responses to the new order are explored in the following books on Russian art, creating a fascinating picture of this still recent period in our history.

Art of the Old Order: 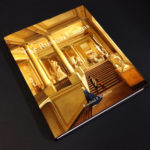 The Russian Canvas charts the remarkable rise of Russian painting in the 18th and 19th centuries, the crucial period right before the fall of the Empire.

Starting with the foundation of the Imperial Academy of the Arts in 1757 and culminating with the assassination of Tsar Alexander II in 1881, Blakesley details the professionalisation and wide-ranging activities of painters against a backdrop of dramatic social and political change. The Imperial Academy formalised artistic training but later became a foil for dissent, as successive generations of painters negotiated their own positions between pan-European engagement and local and national identities. Drawing on original archival research, this groundbreaking book recontextualises the work of major artists and revives the reputations of others in this significant period in Russian art that is often eclipsed by the series of events that followed. 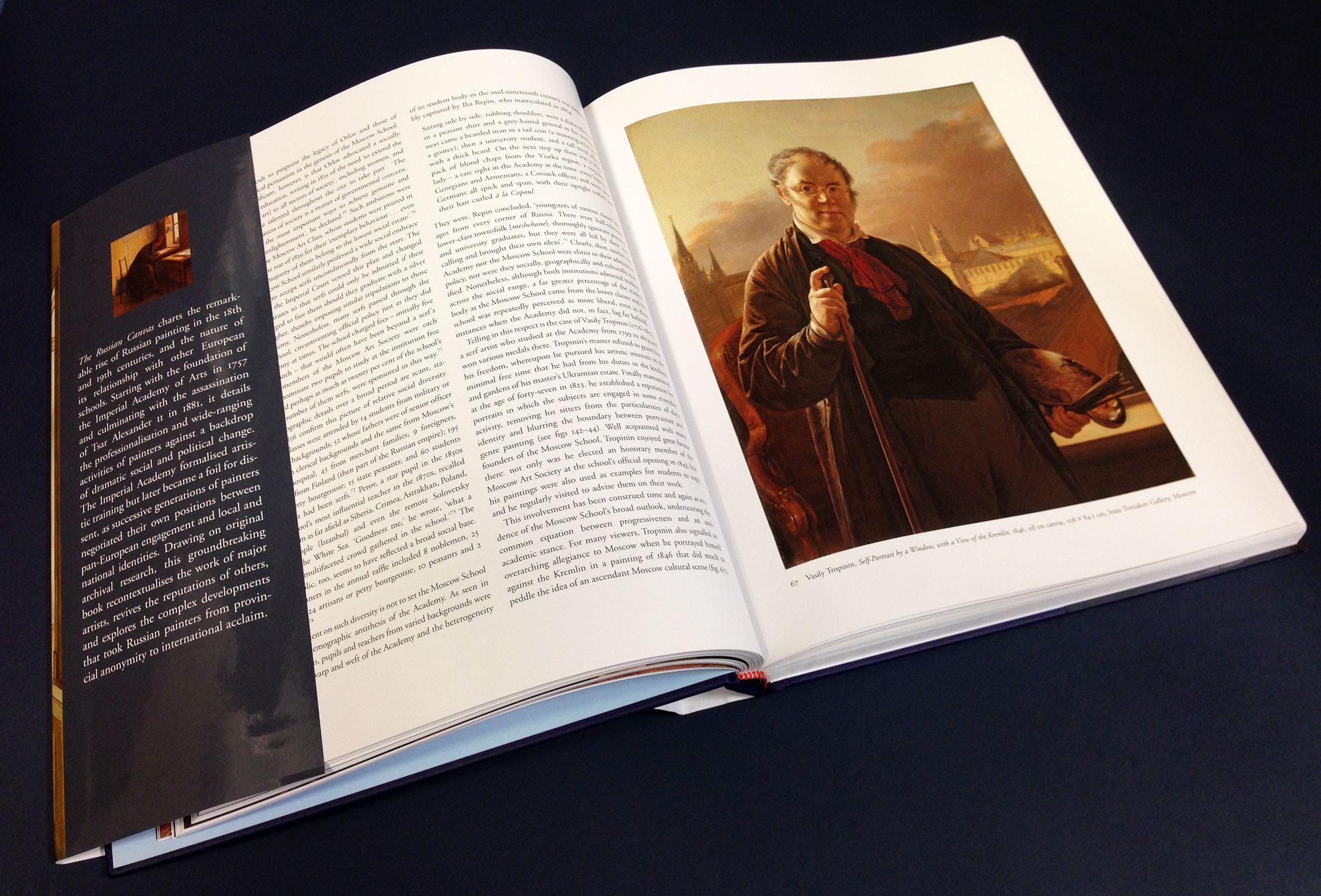 The Most Musical Nation: Jews and Culture in the Late Russian Empire by James Loeffler 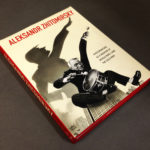 Aleksandr Zhitomirsky: Photomontage as a Weapon of World War II and the Cold War

In an era when satirical photomontage thrives on the Internet and propaganda has reasserted itself in America and Russia alike, this study of a once-prominent yet internationally undiscovered artist is more than timely.

The leading Russian propaganda artist Aleksandr Zhitomirsky (1907–1993) made photomontages that were airdropped on German troops during World War II. He later worked for Pravda and other leading publications, satirising American politics and finance from the Truman through the Reagan eras and educating his public about Egypt, South Africa, Vietnam and Nicaragua as well. Zhitomirsky favored the grotesque and the eye-catching. His villainous menagerie included Reichsminister Joseph Goebbels as a distorted simian and an airborne scorpion outfitted with an Uncle Sam hat.   In this comprehensive, image-driven account of Zhitomirsky’s long career, Erika Wolf explores his connections to and long friendship with the German artist John Heartfield, whose work inspired his own. Wolf also examines more than 100 of Zhitomirsky’s photomontages and translates excerpts from his one published book, The Art of Political Photomontage: Advice for the Artist (1983). 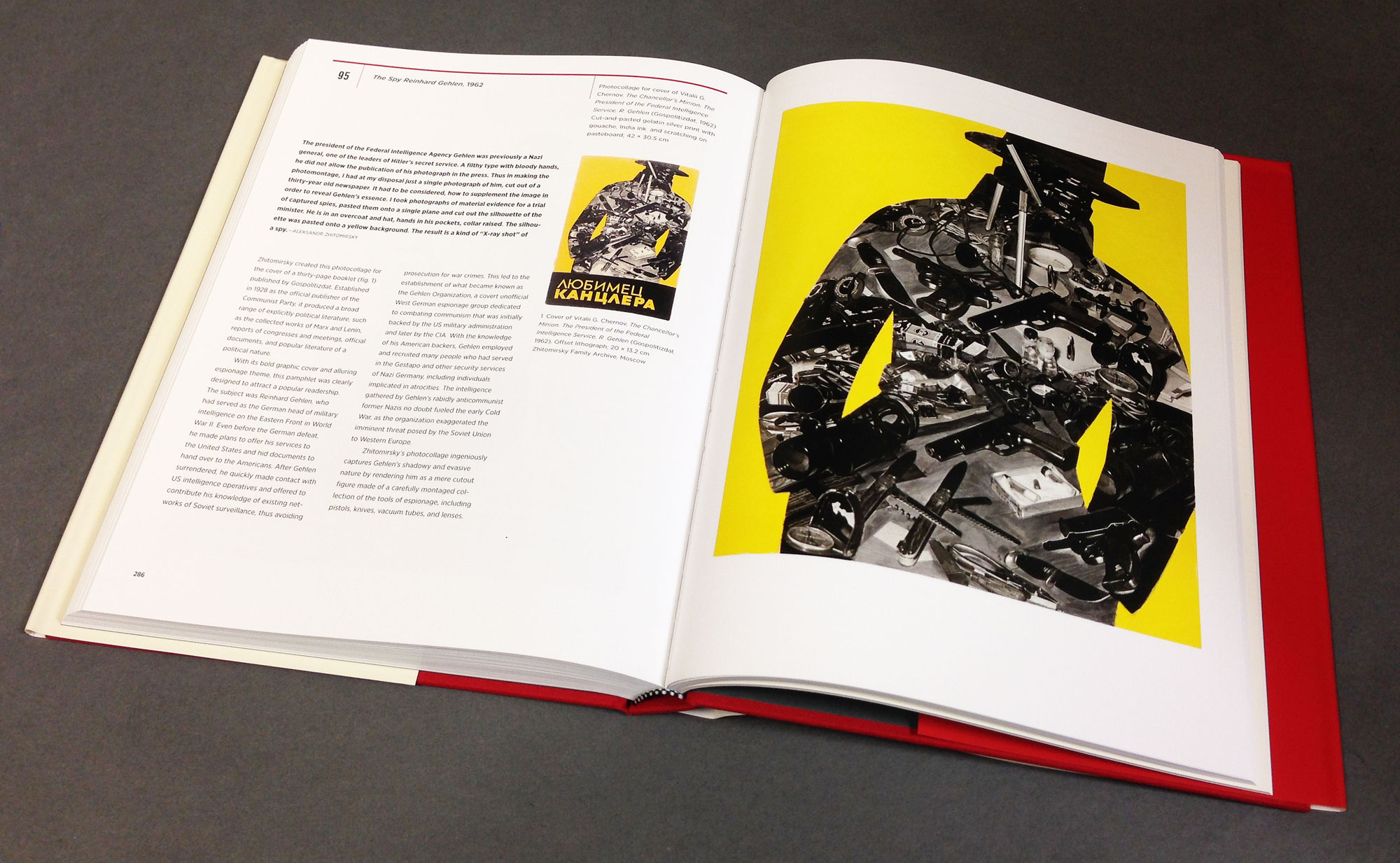 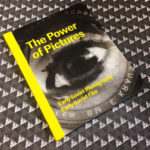 Published in association with the Jewish Museum, New York

Following the 1917 Russian Revolution, photography, film, and posters played an essential role in the campaign to disseminate modernity and Communist ideology.

The Power of Pictures considers Soviet avant-garde photography and film in the context of this crucial period in political history and culture. Three essays trace a generation of artists, their experiments with new media, and their pursuit of a new political order. A wealth of stunning photographs, film stills and film posters, as well as magazine and book designs, demonstrate that their output encompassed a spectacular range of style, content and perspective, and an extraordinary sense of the power of the photograph to change the world. 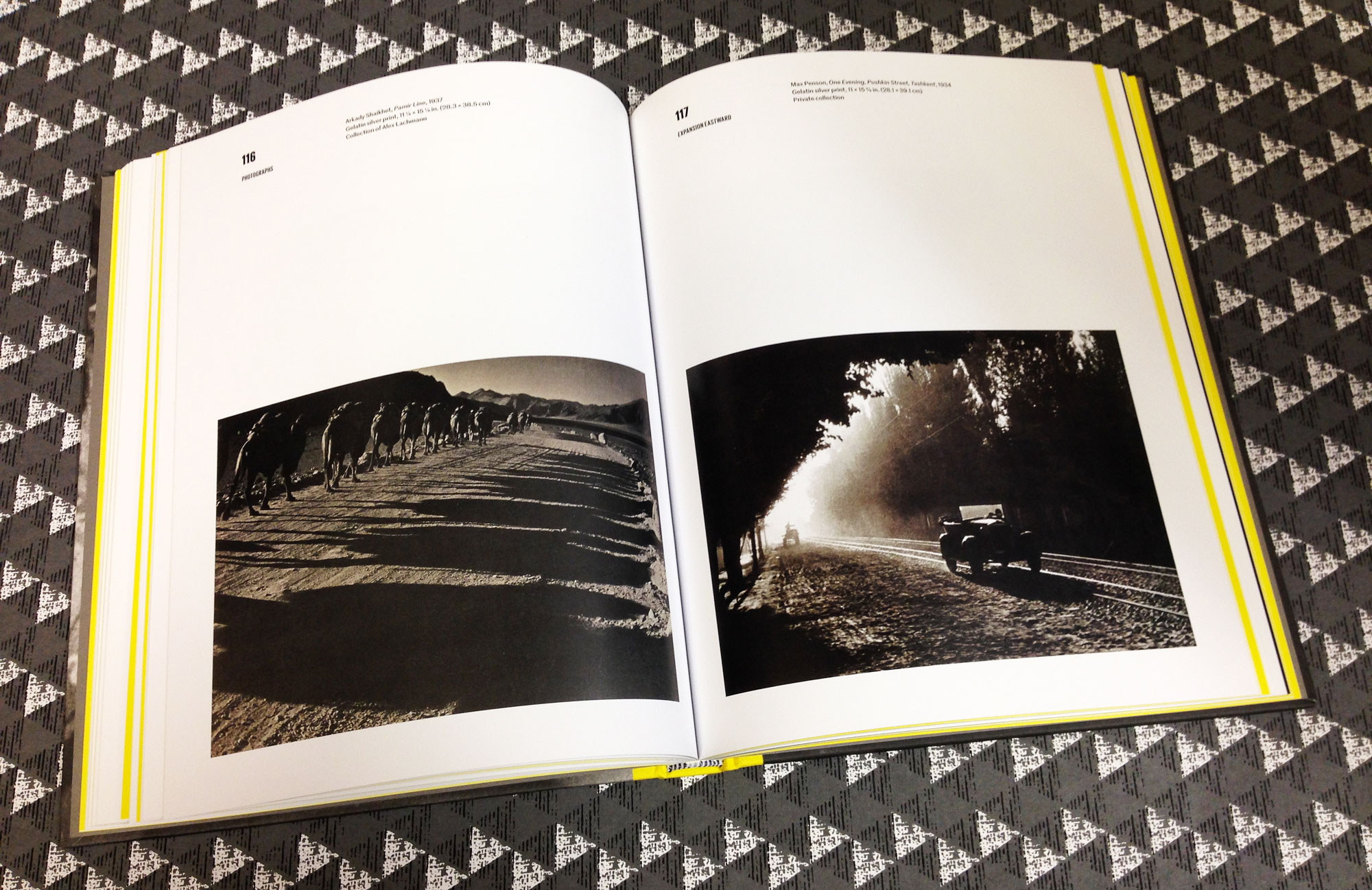 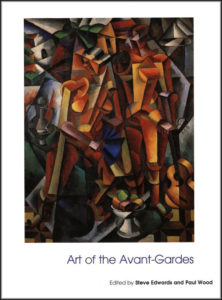 By Steve Edwards and Paul Wood

Art of the Avant-Gardes discusses the development of modern art in the first third of the twentieth century. It introduces the main themes of art in the period and summarizes the political context in which art developed: the First World War, the Russian Revolution, and the subsequent consolidation of the European dictatorships. It presents numerous case studies that illuminate the important idea of ‘expression’ in art, related questions of Orientalism and the ‘primitive’, aspects of Cubism, the development of abstract art and the radical avant-garde movements – Dada, Soviet Constructivism and Surrealism.

Artists on the Left: American Artists and the Communist Movement, 1926-1956 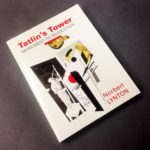 An investigation into the sources and symbolism of Tatlin’s Tower, the gigantic Monument to the Third International designed by Russian constructivist Vladimir Tatlin which was never constructed yet remains a celebrated icon of revolutionary art.

Vladimir Tatlin, the Russian painter and visionary designer, completed the plans for the gigantic Monument to the Third International in 1920. Planned as the headquarters and monument of the Comintern in Petrograd, it was to be made from industrial materials – iron, glass, and steel – as a towering symbol of modernity. But after a period of political turmoil and housing shortages in Russia after the 1917 Revolution, the building was never constructed. Nevertheless it endures as an icon of revolutionary art. Norbert Lynton investigates the sources and symbolism of Tatlin’s Tower and considers not only its significance but also the broader role of allegory in abstraction and as an expression of man’s highest aspirations.

Russian Architecture and the West by Dmitry Shvidkovsky, Yekaterina Shorban and Antony Wood

The Sound of Revolution: 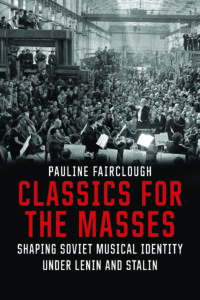 Classics for the Masses: Shaping Soviet Musical Identity under Lenin and Stalin

An exploration of the evolving role of music in shaping the cultural identity of the Soviet Union in a revelatory work that counters certain hitherto accepted views of an unbending, unchanging state policy of repression, censorship, and dissonance that existed in all areas of Soviet artistic endeavor.

Newly opened archives from the Leninist and Stalinist eras have shed new light on Soviet concert life, demonstrating how the music of the past was used to help mold and deliver cultural policy, how ‘undesirable’ repertoire was weeded out during the 1920s, and how Russian and non-Russian composers such as Mozart, Tchaikovsky, Wagner, Bach and Rachmaninov were ‘canonized’ during different, distinct periods in Stalinist culture. In this fascinating study of the ever-shifting Soviet musical-political landscape, Fairclough identifies 1937 as the start of a cultural Cold War, rather than occurring post-World War Two as is often maintained, while documenting the efforts of musicians and bureaucrats during this period to keep musical channels open between Russia and the West.

Music for Silenced Voices: Shostakovich and His Fifteen Quartets by Wendy Lesser

Russian Music and Nationalism: from Glinka to Stalin by Marina Frolova-Walker 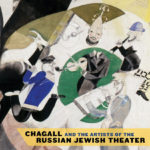 Chagall and the Artists of the Russian Jewish Theater

Shortly after the Bolshevik Revolution, Soviet Jewish theatres became catalysts for modernist experimentation. Working with avant-garde playwrights, actors, and producers in a new political environment, artists such as Marc Chagall, Natan Altman, Robert Falk, and Aleksandr Tyshler combined Russian folk art with elements of Cubo-Futurism and Constructivism into a bold new style that redefined the concept of theatre itself. Spanning such topics as Jewish culture and history in the Soviet Union, the volume includes stunning reproductions of Chagall’s celebrated theater murals; fascinating archival materials such as posters, prints and playbills; designs for costumes and sets; and many other breathtaking works.

Like a Bomb Going Off: Leonid Yakobson and Ballet as Resistance in Soviet Russia

By Janice Ross and Lynn Garafola

The powerfully moving story of the Russian Jewish choreographer who used dance to challenge despotism.

Reflections on a Revolution:

Farewell to an Idea: Episodes from a History of Modernism

In this intense, far-reaching, and poignant book – a book that sums up the work of a lifetime – the acclaimed art historian T. J. Clark rewrites the history of modern art tracing it through the period of Soviet rule.

With the fall of the Berlin Wall, he explains, the project called socialism may have come to an end at roughly the same moment as modernism. Did modernism and socialism depend on each other for their vitality – for their sense

of the future and their wish to live in a fully material world? Have they died? Aware of modernism’s foibles and blind spots, but passionately attached to the movement’s wildness, Clark poses these fundamental questions in Farewell to an Idea.  Modernism, Clark argues, was an extreme answer to an extreme condition—the one Max Weber summed up as “the disenchantment of the world.” Clark focuses on instances of maximum stress, when the movement revealed its true nature.

The book begins with Jacques-Louis David, painting at the height of the Terror in 1793, then leaps forward to Pissarro a hundred years later, struggling to picture Two Young Peasant Women in a way that agreed with his anarchist politics. Next the author turns in succession to Cézanne’s paintings of the Grandes Baigneuses and their coincidence in time (and maybe intention) with Freud’s launching of psychoanalysis; to Picasso’s Cubism; and to avant-garde art after the Russian Revolution. Clark concludes with a reading of Jackson Pollock’s tragic version of abstraction and suggests a new set of terms to describe avant-garde art—perhaps in its final flowering—in America after 1945. Shifting between broad, speculative history and intense analysis of specific works, Clark not only transfigures our usual understanding of modern art, he also launches a new set of proposals about modernity itself. 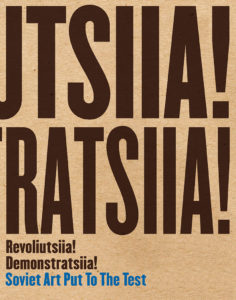 To mark the centenary of the Russian Revolution, this landmark book gathers information from the forefront of current research in early Soviet art, providing a new understanding of where art was presented, who saw it, and how the images incorporated and conveyed Soviet values.

The works featured in this study are grouped into areas of critical importance for the production, reception, and circulation of early Soviet art: battlegrounds, schools, theaters, the press, storefronts, exhibitions, factories, festivals, and homes. Paintings by El Lissitzky and Liubov Popova are joined by sculptures, costumes and textiles, decorative arts, architectural models, books, magazines, films, and more. Also included are rare and important artifacts, among them a selection of illustrated children’s notes by Joseph Stalin’s daughter, Svetlana Allilueva, as well as reproductions of key exhibition spaces such as the legendary Obmokhu (Constructivist) exhibition in 1921; Aleksandr Rodchenko’s Workers Club in 1925; and a Radio-Orator kiosk for live, projected, and printed propaganda designed by Gustav Klutsis in 1922. Bountifully illustrated, this book offers an unprecedented, cross-disciplinary analysis of two momentous decades of Soviet visual culture. 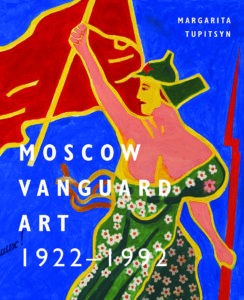 Ambitious and interdisciplinary, Moscow Vanguard Art: 1922-1992 tells the story of generations of artists who resisted Soviet dictates on aesthetics, spanning the Russian avant-garde, socialist realism, and Soviet postwar art in one volume. Drawing on art history, criticism and political theory, Margarita Tupitsyn unites these three epochs, mapping their differences and commonalities, ultimately reconnecting the postwar vanguard with the historical avant-garde. With a focus on Moscow artists, the book chronicles how this milieu achieved institutional and financial independence, and reflects on the theoretical and visual models it generated in various media, including painting, photography, conceptual, performance and installation art.  Generously illustrated, this ground-breaking volume, published in the year that marks the centennial of the October Revolution, demonstrates that, regardless of political repression, the spirit of artistic experiment never ceased to exist in the Soviet Union.

by Malcolm Vale, author of Henry V: The Conscience of a King – ‘By the kyng. Trusty and…