To celebrate the publication of A Little History of Economics, we asked its author – writer, economist and historian Niall Kishtainy – to explain some of the most important staples of economic terminology for us in a handy A-Z of Economics. Read on below for our first instalment covering A-L. 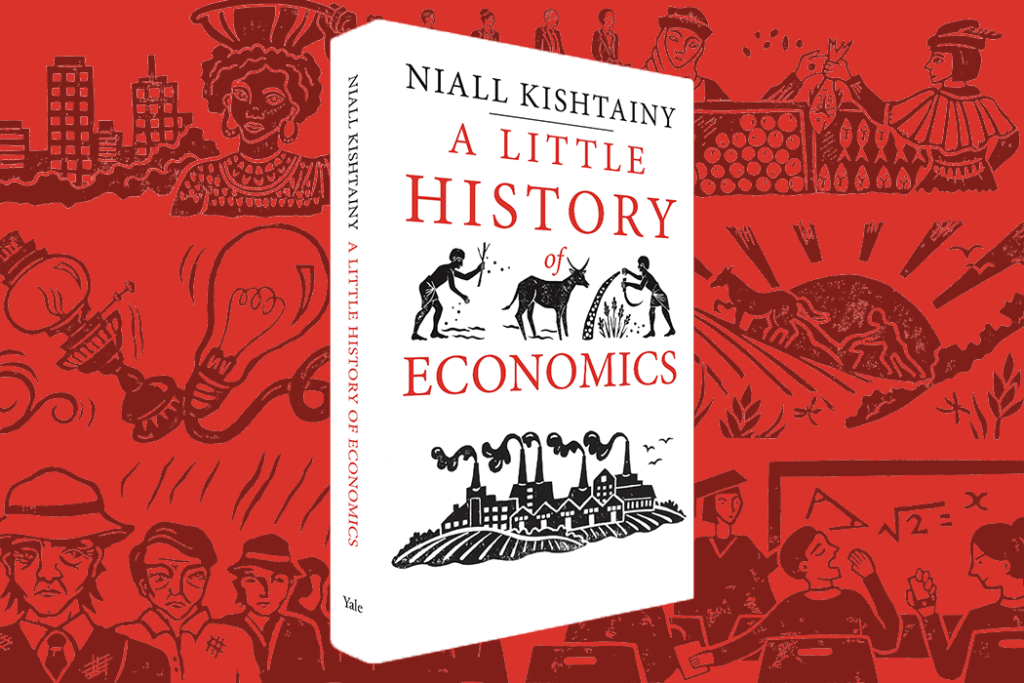 Economics can often seem unapproachable, closed off to those who haven’t been initiated into its technical jargon. In fact, many economic terms are a shorthand for rather common sense ideas. Here are a few favourites, drawn from diverse schools of economic thought over past centuries.

kes courage to launch a line of sunglasses or open a restaurant. What if people find your sunglasses dated or a nearby restaurant takes your customers? Gazing at a spreadsheet of possible profits and losses won’t spur you on to do risky things you simply have to feel bold enough. The economist John Maynard Keynes said that we act because of ‘animal spirits – of a spontaneous urge to action rather than inaction.’ When our animal spirits are fired up we pounce on opportunities and invest money in the face of uncertainty. When they dim, we hesitate. Nowadays economists stress the importance of ‘business confidence’, which also points to the essential role of gut feelings in the ebb and flow of economic activity.

People sometimes get so excited about the chance to make money that they cast off all logic. As more investors scramble to buy shares, like a bubble on a gust of hot air, the price climbs ever higher until it’s far above what the firm’s true value justifies. The market is sure to crash when the bubble bursts. Bubbles are nothing new. One appeared in Dutch tulips in the seventeenth century, and in Britain in the eighteenth people rushed to invest in many dubious schemes, even in a perpetual motion machine.

To make laptops, a manufacturer needs machines, tools and buildings. Economists call these inputs to production capital. When agricultural economies turn industrial, capital grows vastly in scale and complexity, from the ploughs used to cultivate grains to the cranes and factories needed to build cities. For Karl Marx, the existence of capital depended on society being divided into rich capital owners – the capitalists – and the workers who owned nothing and so had to work for the capitalists for wages. To Marx, capital was about the relationship between the workers and the bosses – one riven by discord and struggle – that would eventually lead capitalist society into crisis.

The Division of Labour

arentage of your smartphone defies summary in a simple family tree. The screen might have been made in America, the battery by a Chinese firm, other electronic components by suppliers around Europe. Long gone are the days when master craftsmen would turn out complete products alone at their workbenches. In the 18th century Adam Smith explained that by specialising in one stage of production a worker becomes swift and precise. Today’s elaborate division of labour is a marvel of the modern economy, the basis of its productive power. However, a worker who spends hours fixing a component onto circuit boards that will go into phones sold thousands of miles away most likely finds it harder to take pride in a day’s work than a potter who sculpts, paints and delivers bowls to a loyal customer.

A see-saw is perfectly balanced when the children sitting at each end weigh the same. Economists use the idea of a system at rest to think about how markets work. Suppose that when bananas cost 20 pence then consumers demand a million and suppliers want to sell a million. The market is in equilibrium. Now imagine that next month suppliers only want to sell half a million bananas because shipping costs rise. Demand therefore exceeds supply. To regain equilibrium the price has to increase, encouraging consumers to demand fewer bananas and firms to supply more. In reality, the economy is in constant flux and occasionally, as during the economic crisis of the early 21st century, far from finding its way back to a steady equilibrium, it hurtles into an abyss.

Historically, money has come in the form of coins, shells, cattle, and even in the immovable rocks that were used as currency on the Pacific island of Yap. Money is whatever societies agree upon as the things that people can use to buy and sell goods with. Over centuries societies moved towards the modern form of fiat money: paper notes and coins of cheap metal, which, in themselves are worthless. Today’s money is even more insubstantial: it’s often an electronic record of bank deposits glowing on a screen. When societies use fiat money they can literally create money at will, and this allows for economic policies that could never be entertained when the amount of money is determined by how much gold or silver a nation has.

After the Second World War the holy grail of economics became how to do away with boom and bust – economies racing ahead and then crashing into recessions like the deep one of the 1930’s, which put millions out of work. After the war the world’s leading economies settled down, but in the 1970s became more turbulent. Then, from the mid-1980s, a new calm settled: for several decades economies sailed forward on a steady wind and avoided major storms. Economists called the era the Great Moderation and took credit for being sensible skippers of the economy. But at the start of the 21st century, economic turbulence returned.

Alongside capital, an essential input to production is the labour of workers. Just as firms invest in new machines, people invest in their human capital by earning qualifications that will make them better workers. When the economist Gary Becker proposed the concept of human capital, some were outraged by the idea of people being like machines, but today we hardly question the notion that students go to university to learn skills that will earn them more money when they graduate.

Adam Smith said that if people were hard-nosed characters mainly concerned about profit then society wouldn’t suffer. ‘It is not from the benevolence of the butcher, the brewer, or the baker, that we expect our dinner, but from their regard to their own interest,’ he said. You get your dinner not because bakers and butchers are nice people, but because they want to make money by selling you their goods. They earn a living because you follow your own self-interest by buying their goods. When we pursue our self-interest we all end up with what we want. It might seem as if someone must have organised the economy in order to synchronise the desires of thousands of bakers, butchers and shoppers, but in fact no one has. It’s as if the economy is guided towards harmony and order by an invisible hand, said Smith.

In the medieval world, economic thinkers were mainly concerned with how to make sure that buying and selling was done morally. For example, they were interested in what the just price for a good was: what was the fair, morally correct amount to charge for a loaf of bread or a joint of meat? The medieval philosopher Thomas Aquinas said that the just price was that agreed upon in a community without trickery by sellers. Although economists no longer use the term just price, perhaps in today’s policy of ‘living wages’ – a minimum living standard defined by the government – we hear an echo of that old idea.

The Russian economist Simon Kuznets argued that as economies develop, inequality rises and falls. Societies of small farms and villages develop when new industries emerge and towns get bigger. Industrial workers make more money and a gap grows between them and the traditional rural population. As the new industries spread through the economy, an ever-greater share of people work in them and eventually overall inequality begins to fall. In recent decades, however, the Kuznets curve has gone into reverse: rich countries such as America and Britain grew while their levels of inequality went up. Trends in inequality aren’t automatic: they depend in large part on policy choices, for example, about how to tax workers and businesses.

A liquid asset can be turned into money quickly. You’re most liquid if you have a pile of cash or easily accessible bank savings. Government bonds are highly liquid: they can be quickly sold at a predictable price. A house is illiquid because it may take months to find a buyer. If you owned a house but had no cash, you’d find yourself in a liquidity crisis when your gas bill arrived. You’d be solvent (your assets exceed your liabilities) but illiquid. A firm has a liquidity crisis when in the short term it doesn’t have the money to pay its bills and wages. The firm might be solvent and could be saved with a quick loan from a bank.

Part 2 of our A-Z of Economics is available to view here. 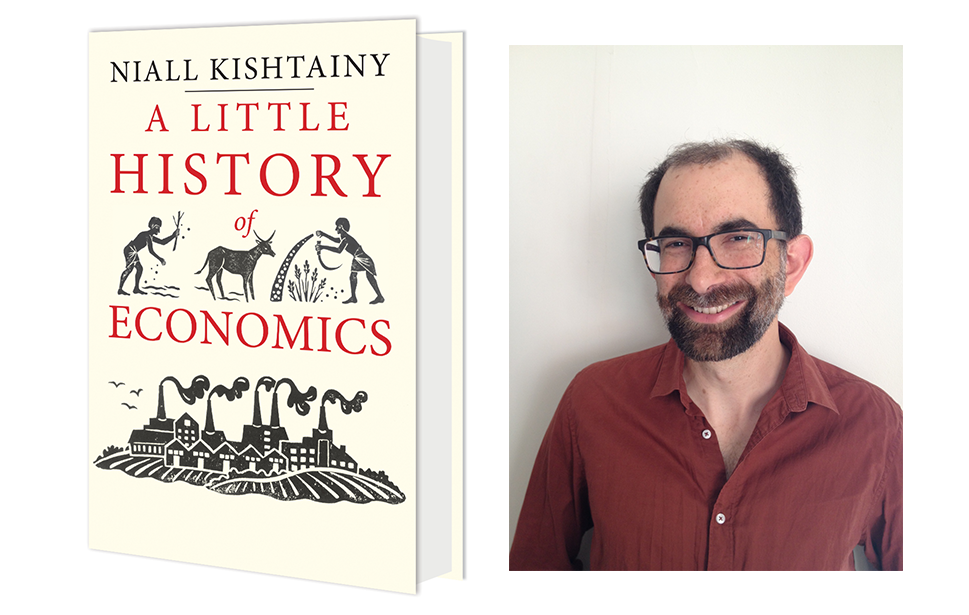 For the next instalment of Niall Kishtainy’s A-Z of Economics, keep an eye out on the Yale Books Blog on Thursday. A Little History of Economics is available to pre-order here. For more information on our Little Histories series, please visit the website. Follow Niall on Twitter @NiallKishtainy.

Yale University Press has just published its catalogue for the Autumn and Winter publishing season. It contains every…