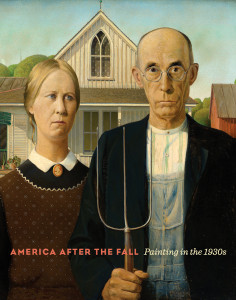 As the Art Institute of Chicago exhibition America After the Fall arrives at the Royal Academy of Arts, London, we delve into the accompanying exhibition catalogue America After the Fall: Painting in the 1930s. In this extract from the introduction, curator and author Judith Barter considers the fraught political climate of the 1930s in America that inspired some of the poignant works of American art we still celebrate today. The Wall Street Crash is often cited as a watershed moment in the history of this period, but rapid changes in urbanisation, industrialisation and immigration also came to define the art of the period. From realism to abstraction, urban to pastoral scenes, America after the ‘fall’ saw the creation of many artistic masterpieces of the 20th century.

You can visit the show at the RA until June 2017. Read on for an extract from the catalogue.

America After the Fall, an extract from the Introduction

The ‘fall’ in America after the Fall refers to what was more commonly called the stock market crash of October 29, 1929. It also aptly describes a fall from innocence: how an entire generation of people who lost their jobs, homes, savings, and dignity perceived their own expulsion from the American Garden of Eden. Never before had such disillusionment visited the nation, a proverbial ‘city upon a hill’ built upon utopian notions of opportunity, progress, and hope. The 1930s called for a re-examination of American culture and values – a rethinking of the meaning of democracy – and prompted new forms of articulating this American dilemma.

What the Depression brought to the arts in the 1930s was a reassessment of what it was to be American and how to express that aesthetically. What form would a national art take, and what subjects would it explore? The 1930s was a decade of seeking for what was original to America itself, for native subjects and themes. This was not a monolithic effort; it took many aesthetic forms and was confused, partisan, and sometimes embittered. But artists pursued, and the government supported, a search for the ‘American Scene’ in art and literature that addressed native culture. The result was artistic sparring throughout the 1930s between those who wanted an American art based on realism and those who felt that abstractions was a universal language that pushed beyond nationalism. Many artists sought a new realist aesthetic language aimed at the people; others tried to express the inner world of dreams and imagination. Some used their work for social protest and to address politics; still others tried to create new forms of art and politics that could repair a democracy damaged by economic chaos.

The exhibition covers the period from the late 1920s, just before the crash of 1929, to the United States’ entry into World War II in December 1941. The crash serves as a symbol for the Depression, but more important factors leading to that debacle are found after the close of World War I in 1919. In that period of economic chaos, both Communism and Fascism took hold of European politics …

… All these ideas existed in the United States as well. In fact, the country’s citizenship was a global one. America’s population doubled between 1890 and 1930, and by the time of the 1929 crash, one in ten Americans either was foreign born or had a parent who was an immigrant. These new arrivals were drawn mainly to urban areas and factory jobs; there they sought, alongside some native-born Americans, to increase their salaries by organizing into unions and workers’ associations. Many European-born Americans were persecuted for their ideas as well as their national origins. The most famous example was that of Nicola Sacco and Bartolomeo Vanzetti, Italian American anarchists who were wrongfully accused of murdering two payroll employees at a Boston area shoe factory. Sacco and Vanzetti were first convicted in 1921 based on circumstantial evidence and conflicting witness reports. Their case was appealed and eventually went to the Massachusetts Supreme Judicial Court. In 1927, even after another man confessed to the killings, the presiding judge, Webster Thayer, upheld their sentences. 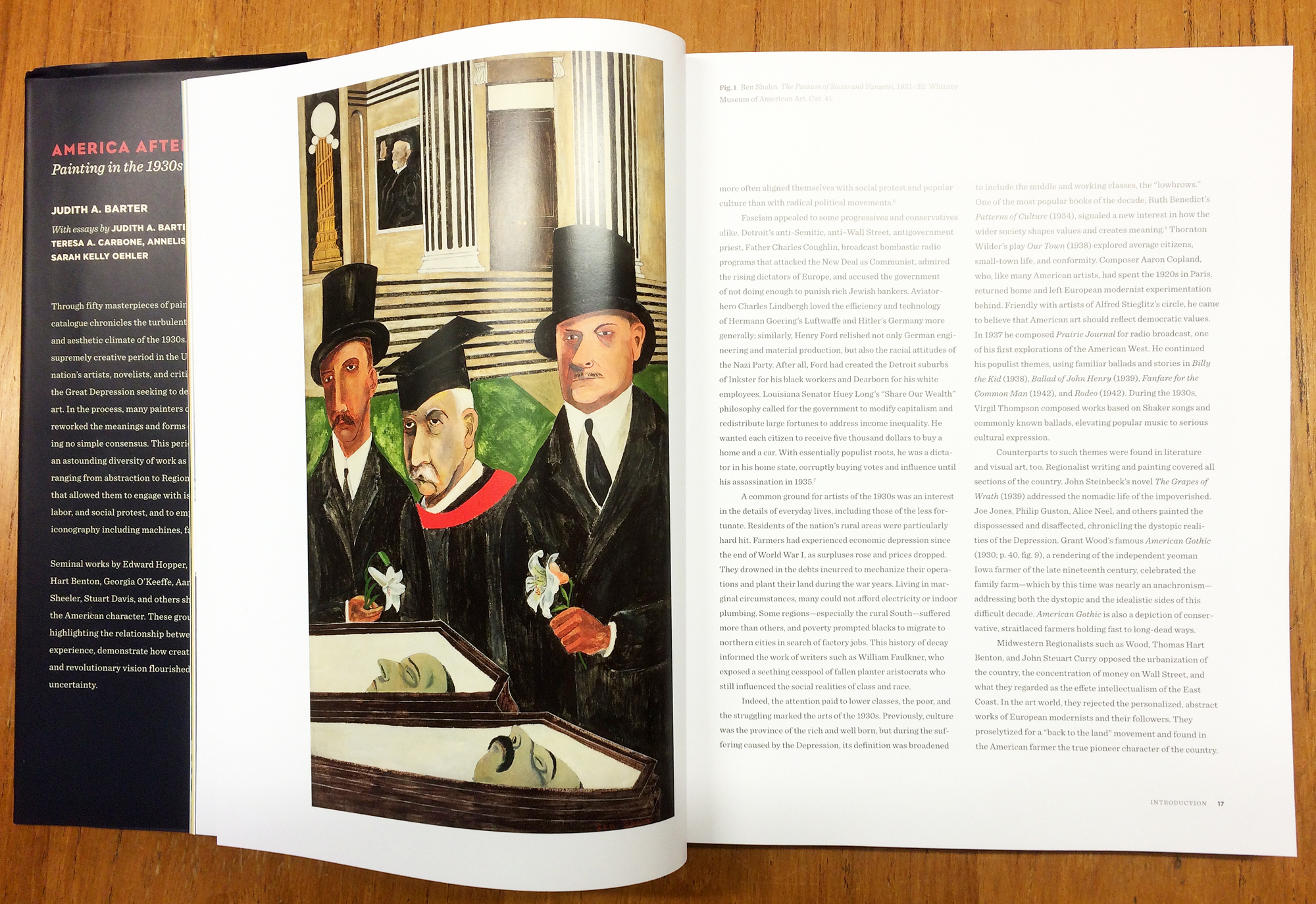 Distinguished jurist Felix Frankfurter was so incensed by the miscarriage of justice that he wrote an article in the Atlantic magazine outlining the reasons for declaring a mistrial. Nonetheless, Sacco and Vanzetti were condemned to death, and they were executed on August 23, 1927. The case enraged leftist artists such as Ben Shahn, who created a series of gouache paintings about the pair. The most famous of these may well be The Passion of Sacco and Vanzetti (1931-32), which depicts the two men in their coffins with the architectural symbols of American justice behind and Judge Thayer to the side. The artist points out the injustices practiced against the poor, the foreign born, and those who embraced the politics of revolt. Shahn, along with painters Philip Evergood, Joe Jones, Reginald Marsh, Charles White, and many others on the left, continued figurative work throughout the 1930s. Some were later labelled Communists in the hearings orchestrated by Republican Senator Joseph McCarthy simply because they defended workers, were politically progressive, or flirted with new ideas about improving justice and democracy. Most American artists during the 1930s avidly supported President Franklin Roosevelt’s New Deal programs. In fact, the New Deal created hundreds of thousands of jobs for the unemployed – including writers and artists – and may well have saved democracy in the United States by making government the largest employer. This changed the relationship of the federal government to its citizens, helping them to stave off economic disaster. The very few artists who were actual members of the Communist Party became disillusioned and finally abandoned their sympathies after Joseph Stalin signed a nonaggression pact with Adolf Hitler in 1939. By then the rising tide of Fascism in Germany, Italy, and Spain became a larger cause. As historian Warren Susman notes, describing the 1930s as a ‘Red’ decade was inaccurate and promoted by those on the right side during the 1940s. Left-leaning American artists more often aligned themselves with social protest and popular culture than with radical political movements.

A common ground for artists of the 1930s was an interest in the details of everyday lives, including those of the less fortunate. Residents of the nation’s rural areas were particularly hard hit. Farmers had experienced economic depression since the end of World War I, as surpluses rose and prices dropped. They drowned in the debts incurred to mechanise their operations and plant their land during the war years. Living in marginal circumstances, many could not afford electricity or indoor plumbing. Some regions – especially the rural South – suffered more than others, and poverty prompted blacks to migrate to northern cities in search of factory jobs. This history of decay informed the work of writers such as William Faulkner, who exposed a seething cesspool of fallen planter aristocrats who still influenced the social realities of class and race … 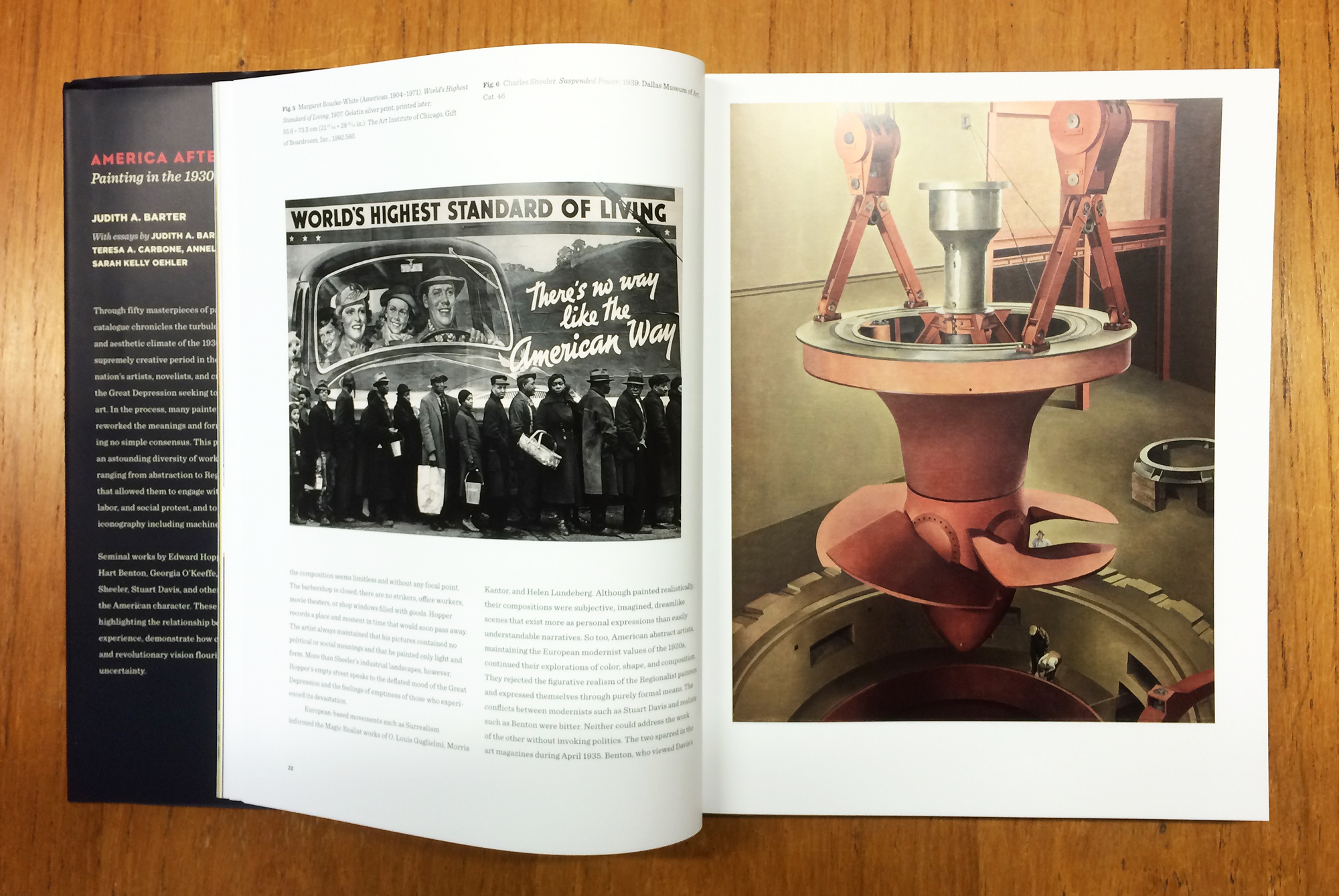 … Regionalist writing and painting covered all sections of the country. John Steinbeck’s novel The Grapes of Wrath (1939) addressed the nomadic life of the impoverished. Joe Jones, Philip Guston, Alice Neel, and others painted the dispossessed and disaffected, chronicling the dystopic realities of the Depression. Grant Wood’s famous American Gothic (1930), a rendering of the independent yeoman Iowa farmer of the late nineteenth century, celebrated the family farm – which by this time was nearly an anachronism – addressing both the dystopic and the idealistic sides of this difficult decade. American Gothic is also a depiction of conservative, straitlaced farmers holding fast to long-dead ways.

Midwestern Regionalists such as Wood, Thomas Hart Benton, and John Steuart Curry opposed the urbanisation of the country, the concentration of money on Wall Street and what they regarded as the effete intellectualism of the East Coast. In the art world, they rejected the personalised, abstract works of European modernists and their followers. They proselytized for a ‘back to the land’ movement and found in the American farmer the true pioneer character of the country. Their pictures celebrated an earlier Jeffersonian ideal of small farms and merchants in a time when the nation’s citizens lived mostly in urban areas and industry fed the country’s economic growth. Because the nation had become predominantly urban, artists depicted the activities of city dwellers, too. Evergood, Marsha, and Paul Cadmus painted the entertainments enjoyed by sailors and moviegoers. Figures and gestures became large, and canvases were crowded with life. 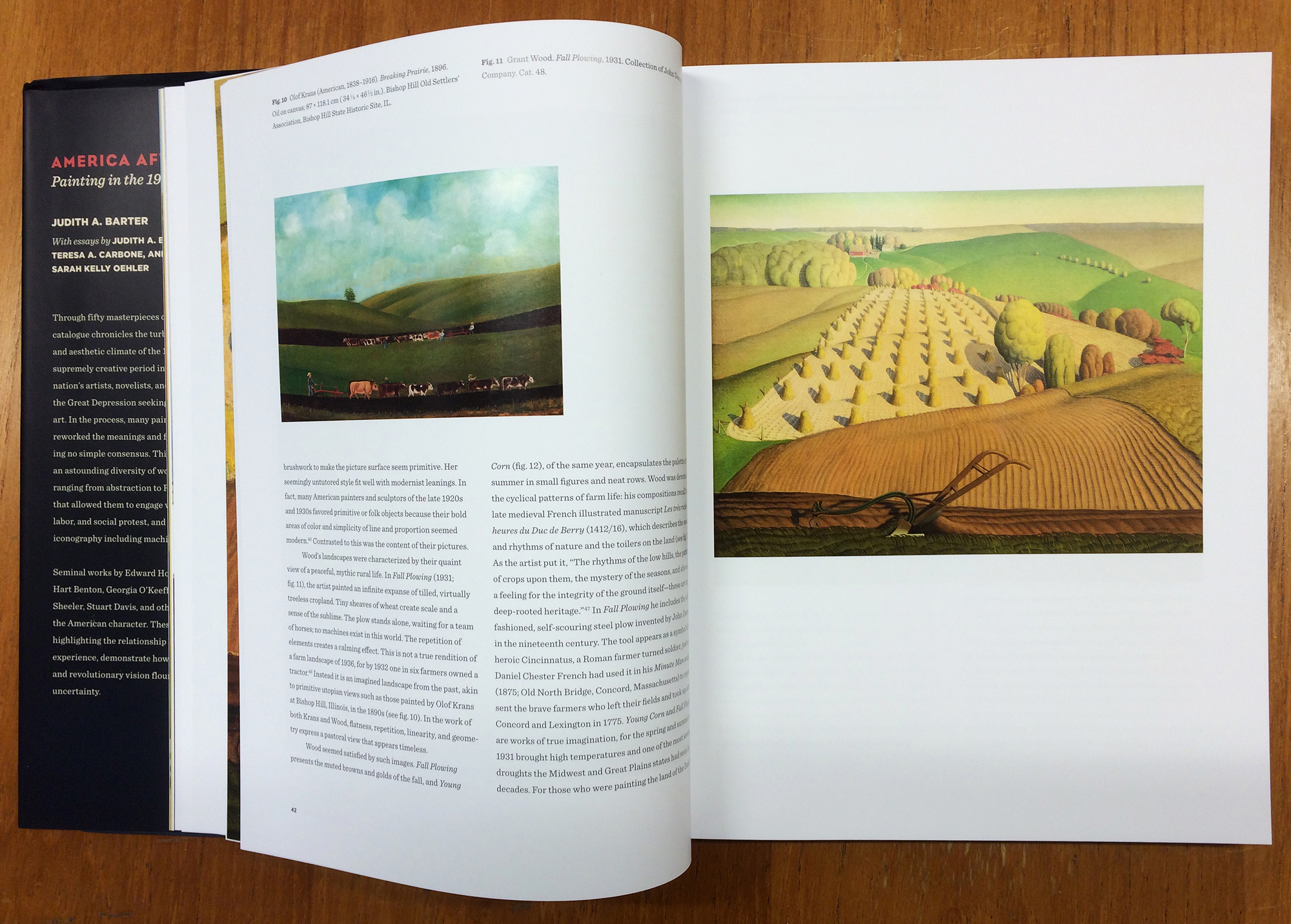 Paintings of the ‘American Scene,’ with realistic and uplifting subjects that showed local places and common people, were preferred by the support programs of the New Deal administered through the Public Works of Art Project, active in 1933 and 1934, which provided art to ornament new housing projects, courthouses, post offices, and hospitals. Such was the quality and quantity of artistic output during the 1930s that the Nation magazine commented that the Depression was the best thing that ever happened to American artists.

America After the Fall is on sh 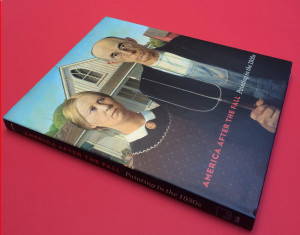 ow at the Royal Academy of Arts, London, until June 2017.

America After the Fall: Painting in the 1930s, by Judith A. Barter, is available in stores and online

The Battle of Bannockburn: a decisive moment for Scottish independence

Today marks the 700th anniversary of the Battle of Bannockburn, a decisive moment for Scottish national identity, and…