One thousand years and a few months ago, Anglo-Saxon England was successfully invaded by Danes and their allies. This was a half century before the Norman Conquest, and had just as great an impact on English society as the events of 1066, and yet is all but overlooked by the English- (and Danish-) speaking publicly today. The leader of this invasion, Cnut the Great, is now chiefly remembered as the prideful figure who sat enthroned on a beach, commanding the tide to go back, and getting his feet wet. In fact, this story is a modern misunderstanding of a medieval legend intended to demonstrate the opposite – the pious Cnut dictates the action in order to show his court that God will always be more powerful than any worldly king.

Below, Timothy Bolton offers a fascinating reappraisal of one of the most misunderstood of the Anglo-Saxon kings: Cnut, the powerful Danish warlord who conquered England and created a North Sea empire in the eleventh century.

The events of Cnut’s life are relatively straightforward to chronicle. He was born sometime in the decade before the year 1000 in Denmark, as the second son of its king, Sven ‘Forkbeard’, who had seized the country a decade or so before that from his own father, Harald ‘Bluetooth’ (after whom the wireless data exchange technology was named). He accompanied his father on an invasion attempt of England in 1013, which was cut short by Sven’s sudden death the year after, but returned at the head of his own army in 1015. By the end of summer 1016 he had fought, and probably schemed, the English to a standstill – exploiting the death of the previous king, Æthelred ‘the Unready’ (on whom see Roach) and apparent unpopularity of Æthelred’s son and heir, Edmund Ironside. On a small island in the Severn the two rulers divided England, with Edmund taking the south, and Cnut the Midlands and North. Such an arrangement was, however, short-lived, and Edmund died suddenly some months later – if one believes later accounts from being stabbed from below by an assassin hidden in his toilet. Cnut took control of the whole country, and set out on a frenetic campaign of activity trying to satisfy opposing groups, rewarding his Scandinavian allies for their part in the invasion as well as calming groups of the English elites by favouring their interests over the invaders. Scandinavians were introduced to key roles in the royal court and most probably also local government, and new Anglo-Danish dynasties were founded. These early years also saw the inception of two vast law codes (one ecclesiastical, one secular), which make up much of what we now know of late Anglo-Saxon law.

Around 1019, Cnut’s elder brother who had held control of Denmark after their father’s death, himself died, opening a new chapter in Cnut’s busy youth. Cnut ruled both countries equally, travelling between them, and in fact using English wealth and personnel to build up infrastructure (and thus political control) in Denmark. This second throne brought with it a part to play in the game of musical chairs that was contemporary Scandinavian state politics, with newly centralised Denmark and Norway seeking the support of parts of de-centralised Sweden to form a power bloc against the other. In 1026, Norway and Sweden invaded Denmark, probably by the invitation of Danish elites opposed to Cnut. He played a masterly hand, and appears to have held back from full engagement with their forces, striking quickly and unexpectedly back at them, driving them around the horn of southern Sweden and then blockading them into the Baltic Sea. The Swedes went home and the Norwegians were forced to march overland in winter, decimating their forces and ensuring that they would not raise similar opposition for a generation. Cnut took a fleet to Norway and seized control there, adding this to his fledgling ‘empire’.

Easter 1027 saw Cnut in a new role, as a guest at the imperial coronation of Conrad II in Rome, and as a budding international statesman. This book proposes and explores a new theory, that Cnut may have been invited not as a close ally of Conrad’s, but as the opposite – a powerful political figure with his own agenda in who should be the next emperor, who was meddling in the imperial succession against Conrad. As often noted, most recently by Marlon Brando in The Godfather, one keeps friends close, but enemies closer.

The following years were ones of peace, prosperity, pious gifts to the Church, and a growing Anglo-Danish culture in Cnut’s court. However, with a pun intended, time and tide wait for no man, and in a few short years Cnut’s time had run out. Like other male members of his family, he also died suddenly and early, on 12 November 1035 in his late thirties or early forties. As an aside, his sons would also all die early, and the dynasty seems to have been brought down by some genetic weakness towards strokes or aneurisms.

Cnut was a new form of Scandinavian ruler with Anglicised and European ideas of power, but one firmly rooted in his Scandinavian past and the traditional roles which came with that

Establishing the facts of his life is a simple task in comparison to that which awaits the biographer, and the image of the man behind the acts as reported in the various sources of evidence often seems like the reports of the three legendary blindmen describing their elephant. To the Anglo-Saxon chronicler who wrote in the early part of Cnut’s reign, he is the pinnacle of the wave of destruction from Viking raiders which had plagued England for decades before his invasion. However, this cap fails to fit well. Cnut’s invasion, like that of his father’s before him, was quite different from previous raiding and sought not ready cash and valuables but political control. To the English sources of his mature reign he was a perfect English monarch, ruling by the model of his predecessors, but again a few small facts suggest that this is not the whole story. To the sole Scandinavian contemporary sources – skaldic praise poems composed for Cnut in Scandinavian language and tradition to be recited before his court – he was a new form of Scandinavian ruler with Anglicised and European ideas of power, but one firmly rooted in his Scandinavian past and the traditional roles which came with that. Again that cannot be the whole picture. Out of these apparent contradictions a complex figure emerges, one who had to stand in two worlds all of his life, as a devout Christian but member of the ruling family of a only partly-Christianised country, and as the greatest of contemporary Scandinavian warlords and yet the head of the relatively sophisticated machinery of English bureaucracy. A few tiny snippets of evidence suggest that where we can detect the distortion of the reporting of events, what have most recently be called ‘alternative facts’, his hand is directly behind this. I have concluded that this vantage position, standing atop several conflicting worlds, freed him partly from the conventions of those, and allowed him a fluidity of character which enabled him to act several apparently conflicting roles at the same time, keeping him at the head of very different elites in a carefully managed balancing act. 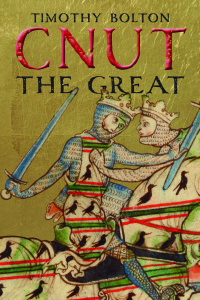 Timothy Bolton is the author of The Empire of Cnut the Great: Conquest and the Consolidation of Power in Northern Europe in the Early Eleventh Century. He is an honorary fellow of both Cardiff and Aberdeen Universities, and lives in Stockholm, Sweden.

An A-Z of the World – E. H. Gombrich on: Alexander the Great