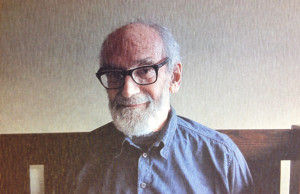 On the last day of 2016 the world lost one of its foremost architectural historians when James S. Ackerman died, age 97. Ackerman was a consummate, and widely esteemed academic, whose rigorous approach set architecture in the broader contexts of cultural and intellectual history. He was a Fellow of the American Academy of Arts and Sciences, a member of the American Philosophical Society, and a corresponding member of the British Academy, the Bavarian Academy of Sciences, the Accademia Olimpica, Vicenza, the Ateneo Veneto, the Accademia di San Luca in Rome and the Royal Academy of Uppsala. He received six honorary doctorates and was a Grand Officer of the Order of Merit of the Italian Republic, an honorary citizen of Padua and received the Golden Lion Award at the Venice Biennale of 2008. He was awarded the Balzan Prize 2001 for achievement in architectural history and urbanism and the 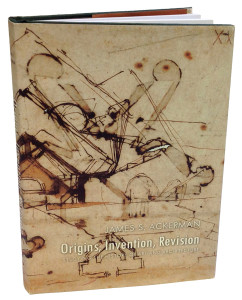 Paul Kristeller citation 2001 of the Renaissance Society of America for lifetime achievement.

It was our privilege to be able to ask him a few questions about his last publication, Origins, Invention, Revision: Studying the History of Art and Architecture, which was published at the end of 2016. So in honour of the life of a great man, here is that interview, in which he shares his very personal journey through architectural history, across London, Italy and beyond.

YaleBooks:  You mention in the book that during the 1940s – early on in your military service – you spent some time in London. Looking back, what are your abiding memories of the architecture you encountered?

James S. Ackerman:  My unit was headquartered in the West End in Bedford Square, one of the poshest sections of the city. Because of the bombing, there were few places to stay, so I slept in a bathtub!

I visited St. Paul’s Cathedral designed by Christopher Wren, the greatest architect of his generation. It emulated St. Peter’s in Rome, the most ambitious building of its kind. The structure of St. Paul’s, particularly the creation and realization of its dome, illustrates similar structural issues that were encountered by Bramante and later, Michelangelo in the construction of St. Peter’s. St Paul’s interior differed from St Peter’s in its modest use of curved, buff-colored masonry and brickwork – used on its exterior, with very little ornament, in contrast to the grandeur and ostentation of St. Peter’s. 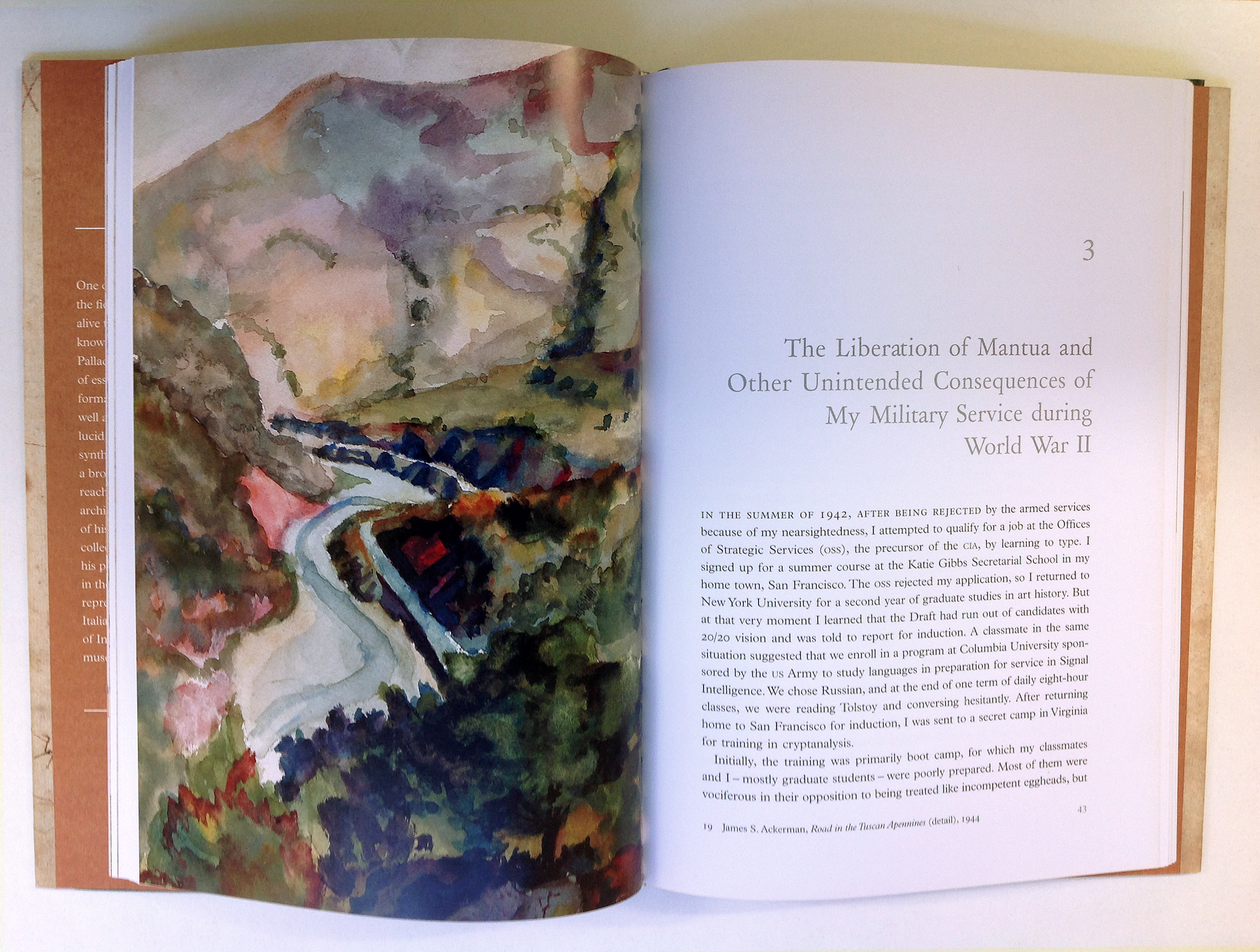 YaleBooks:  In “The Magnificenza of Palladio’s Late Works and Its Legacy Abroad”, you reference Michael Pollan’s The Botany of Desire (2001). Can you elaborate on how Pollan’s work has stimulated your thinking – both here and in other ways?

James S. Ackerman:  I have always approached art, architecture, and city planning with a strong interest in context. Thus, in studying a building, city or village, I have researched the socio-economics, politics, and “zeitgeist” that have either influenced or led to the formation of its buildings. What I “saw” in Pollan is a kindred understanding of systems – their inter-connectivity. He is brilliant at applying the principles of the natural sciences to the human condition. Every outcome is the result of collaboration.
I didn’t know how to interpret the difference in appearance of Palladio’s buildings in Vicenza from those in Venice. Reading The Botany of Desire gave me a way to understand how the socio-political-religious climates of each city influenced their citizens which led to different kinds of patronage. 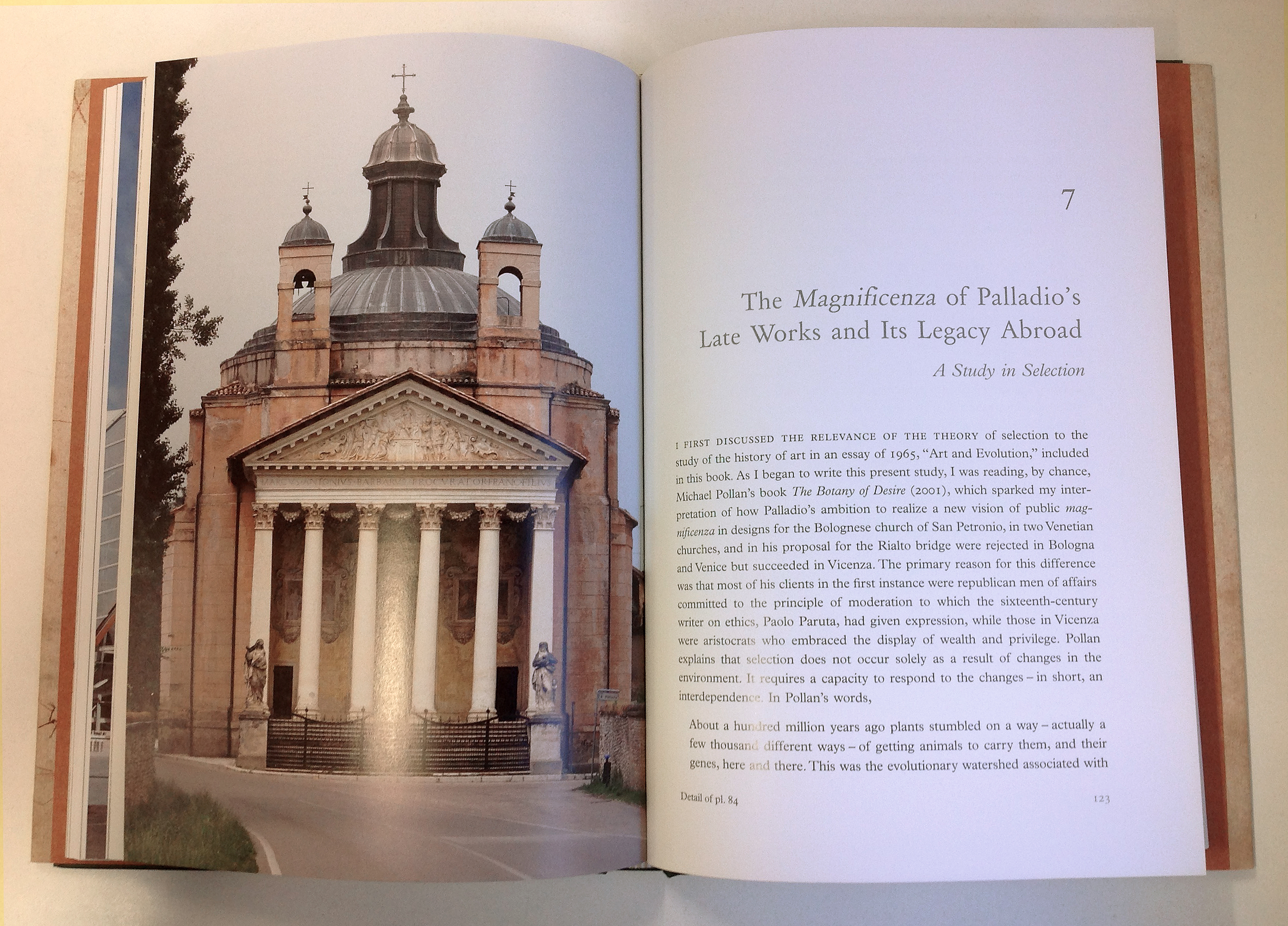 YaleBooks:  You chronicle your 2006 trip to India in the final chapter of the book; in brief, what sort of an impact did this trip to the Temple of Ranakpur have on your understanding of Western architecture? What did it reveal about your practices as a scholar?

James S. Ackerman:  In the first place, “My Passage to India” essay was named “Architecture Hot and Cold” – the “hot” had to do with the passionate engagement on the part of Indian architects and artisans and the “cold” referred to the theoretical, intellectual approach of Western architects, for example in white box buildings. Also, I wasn’t prepared for the heavy presence of Hindu storytelling that seemed to dictate form and function.
What my travel experience revealed is the narrowness of my own education. In retrospect, I wish that I had included world architecture in my own study and attention in order to represent the breadth of architectural practices. 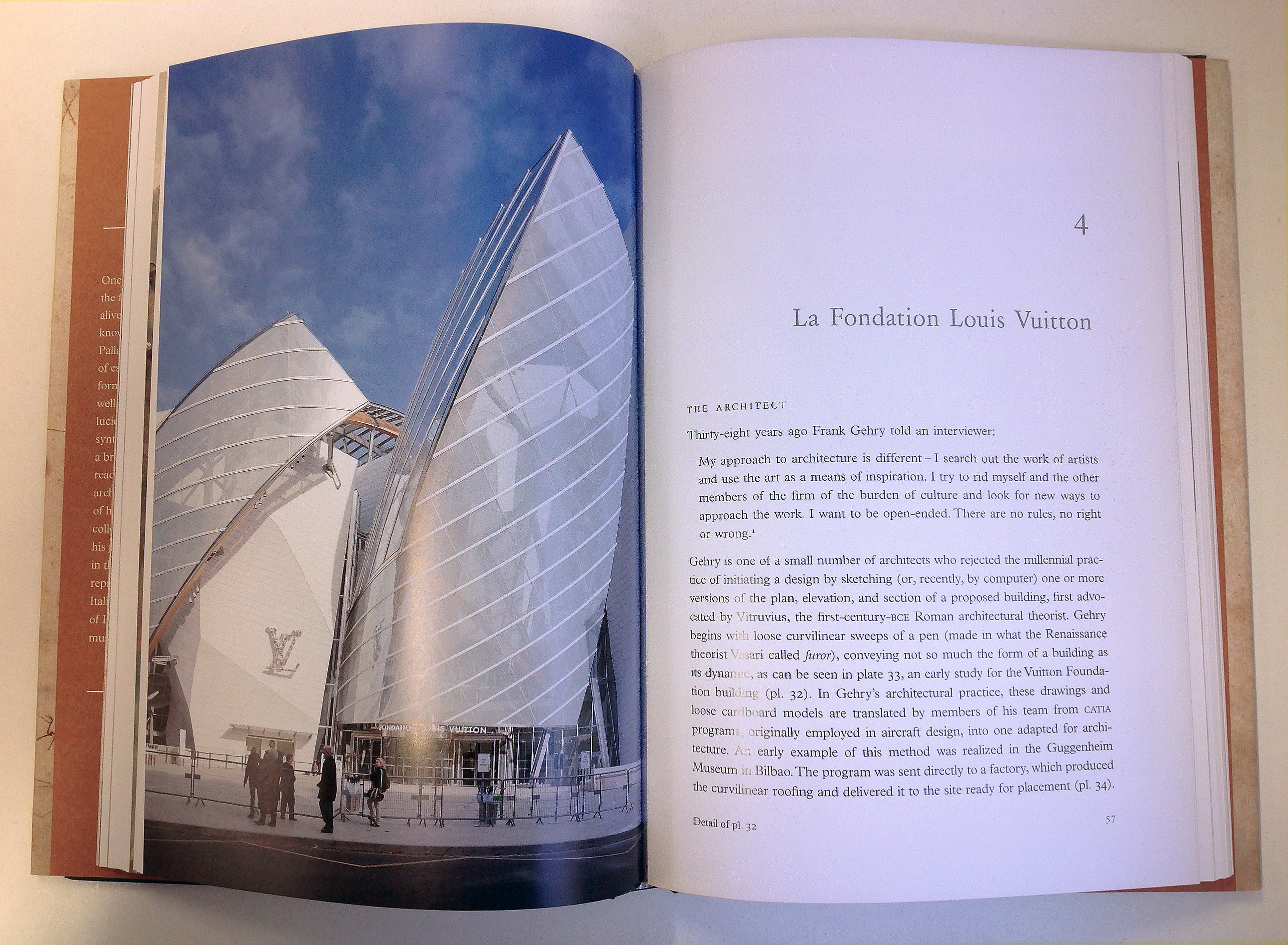 YaleBooks:  You describe Frank Gehry’s design for La Fondation Louis Vuitton as successfully joining a ‘passion for art while observing the demands of engineering’. Who are the architects and engineers (past and present) that most inspire you. If you had a dream architectural project – what would it be and who would work on it?

James S. Ackerman:  My really favorite architect is Le Corbusier. The Ronchamps Chapel not only departs from the white box; it has a roof of great complexity that required the work of an engineer to realize the project. I also admire Louis Kahn. My favorite building of his is the Jatiyo Sangsad Bhaban, the National Parliament House of Bangladesh, located at Sher-e-Bangla Nagar in the Bangladeshi capital of Dhaka.

I am equally impressed by the color applied in American fire stations, in particular one by Robert Venturi in Columbus, Indiana.

A dream project? Yeahhh! A city center like (Frank Lloyd) Wright’s, to be built by William Rawn and Homa Farjadi. 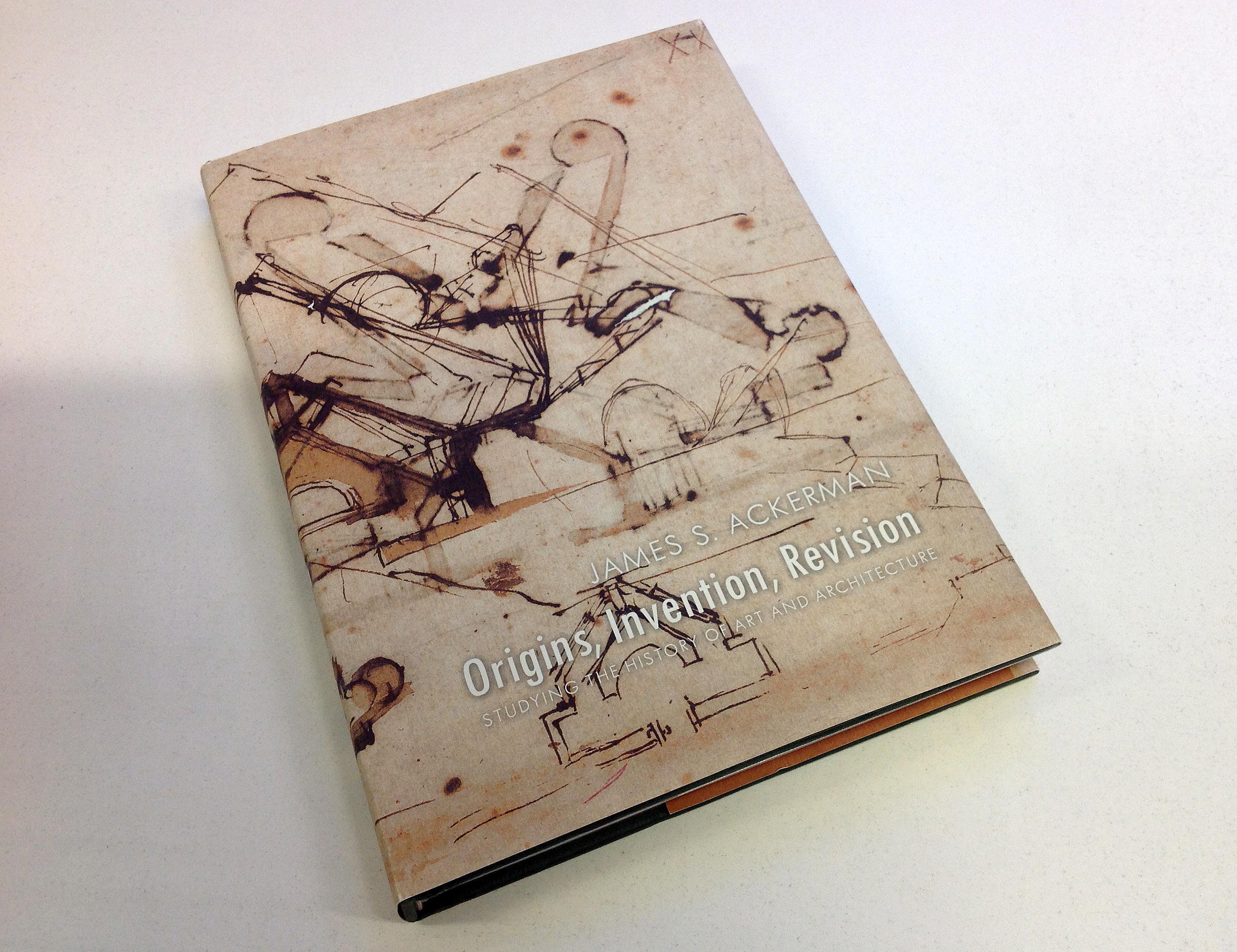 Origins, Invention, Revision: Studying the History of Art and Architecture is available from Yale.

The Banality of Evil: Hannah Arendt

How could humans have committed all those atrocities that characterised the Holocaust? Were they all monsters and sadists,…