Blanc investigates industry practices and asks when a new technology makes people ill, how high does the body count have to be before protective steps are taken?

There is a story of the nineteenth century Rabbi Zissel Ziv, the elder of Kelmė, a town in Lithuania then under the aegis of the Russian Empire. Kelm’s principal thoroughfare had been paved by prisoners sentenced to slave labour, far from a notable circumstance in that time and place. But Rabbi Ziv, a leading figure in the Jewish ethical Mussar movement, believed that attention should be paid. He is reported to have said of the Kelm road, “How is it possible for people to walk with serenity in this place when people suffered through such great hardships here, leaving behind their blood and sweat?”

In today’s increasingly globalised marketplace, there is a moral imperative that we, too, pay attention. How and by whom the path has been paved is an apt metaphor for the poor labour conditions under which workers in so many places around the world toil to deliver to the goods we want at the price point we prefer. Of course, consumers are concerned for their personal safety when threatened by repeated episodes of the importation of faulty or even tainted goods, ranging from leaded children’s toys to chemically contaminated dry wall to poisonous pet food to old fashioned spontaneous combustion, the exemplar of which has been the Samsung cellphone. But what if the final product is totally safe and the danger wholly borne by others, some living among us, others far away, all of them unseen and unknown?

But what if the final product is totally safe and the danger wholly borne by others, some living among us, others far away, all of them unseen and unknown?

This issue was brought home to ethically-concerned consumers by the modern, multinational apparel trade. In recent years, a string of disastrous fires and building collapses have killed hundreds of twenty-first century sweatshop workers in South Asia, reminiscent of the Triangle Shirtwaist disaster on our own soil one hundred years before. Meanwhile, halfway around the world, young apparel factory workers in Turkey have been developing life-threatening silicosis contracted from sandblasting denim jeans for the sole purpose of garnering a value-added, trendy distressed look.

My own work on viscose underscores the dichotomy between the safe and satisfied consumer and the endangered worker making the goods that buyers covet. Viscose is a synthetic syrup spun into the gossamer of the textile, rayon; extruded into the see-through film, cellophane; and puffed up into sponges. The key ingredient in the industrial process of making viscose, along with cellulose pulp, is a dangerous chemical called carbon disulfide. Medical research, carried out over many decades, shows unequivocally that carbon disulfide exposure can cause acute psychosis, sensory nerve damage, Parkinsonism, heart attack, and stroke.

This highly toxic substance is not retained in the final rayon party dress, cellophane-wrapped bouquet, or kitchen sponge. Consumers need not worry for themselves. In factories producing and using viscose, however, carbon disulfide fumes routinely waft off into the air that the workers breathe. This has been the case for more than a hundred years, ever since the viscose industry first took off before World War I. Until the end of World War II, the major rayon producers were interlocked in multinational arrangements with manufacturing sites in the U.K., Germany, Italy, Japan, and the U.S. Now, the international rayon business is largely based in China, Indonesia, and India. Carbon disulfide-based cellophane, sponges, and related viscose products are still made in the U.S. and elsewhere.

In the case of secondary apparel manufacturing in Asia, there have been growing demands from U.S. consumers that major brand marketers guarantee that contracted work is carried out under acceptable conditions. For viscose, a parallel approach could be possible, except that we had better start here at home. Workplace exposure levels for carbon disulfide that are allowed for in the U.S. by Federal OSHA are among the most lax standards in the world; China’s legal limit, on paper at least, is more protective.

In the end, Rabbi Ziv’s words remind us that even if a pair of jeans from Turkey or a polyester print from Pakistan or a rayon clothing item from India poses no personal risk to the one that wears the item, hidden costs may remain, if paid for in the blood and sweat of production. 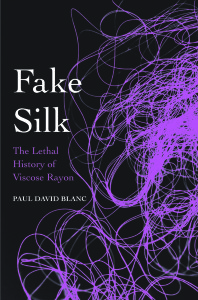 Paul David Blanc, M.D., is professor of medicine and holds the Endowed Chair in Occupational and Environmental Medicine, University of California, San Francisco. He is author of How Everyday Products Make People Sick and writes the Household Hazards blog for Psychology Today.

As a new exhibition at the National Gallery London looks to our neglected woodland for inspiration, we ask its…