In this remarkable literary and historical analysis, Peter Lake pulls the curtain back on what Shakespeare was really telling his audience and what his plays tell us today about the times in which they were written.

An Introduction by Peter Lake

I find it hard to remember precisely when I decided that I was writing this book. It is, of course, notoriously difficult to say anything novel, or even arrestingly interesting, about Shakespeare and only a fool would start out intending to do what I have done in this book. My only defence is that I never intended to write a book like this but rather fell into the set of questions and interests that eventually produced it, if not simply by accident, then at least while intending to do something else. I wanted to explicate how contemporaries conceived, reacted and talked about the succession question in late Elizabethan England. The initial task I set myself was to take up Patrick Collinson’s notion of the ‘Elizabethan exclusion crisis’ and the (at least potential) succession crisis that followed by linking his concern with the politics of crisis management as practised by those inside the Elizabethan regime to a range of Catholic sources.

At the same time that I was doing this, I was going with increasing frequency to a series of performances of early modern plays, many of them history plays of one sort or another and most of them by Shakespeare. There I kept persistently noticing references to various contemporary events and concerns that I thought rendered the plays fit objects for the analytic attention of an historian of the period. The big reveal here occurred during a student production of King John which I saw one summer in Cambridge. I had never seen the play performed or indeed read it, but at a crucial moment in the play I saw, or thought I saw, a parallel being set up between John and his nephew Arthur and queen Elizabeth and Mary Queen of Scots. I vaguely knew that John’s reign was a heavily contested site for both protestant and catholic propagandists, and I set off to see what reading that play might have to tell me about both the play and the period.

While I was going to the theatre for fun, my day job involved reading a number of Catholic political texts. In so doing I realised that the tracts were using precisely the same set of political events, culled from medieval English as well as Roman history, as contemporary playwrights were putting on the popular stage. The tracts were using the history to discuss the current political conjuncture and to speculate about the course of English succession and religious politics, often in highly controversial, even potentially treasonous ways. Why not, I thought, read the plays against the tracts and the tracts against the plays, and both against the political circumstances of the day.

My aim was to say something, as I hoped, interesting, and perhaps even novel, about the political culture of the Elizabethan fin de siècle. And in particular, about the modes and media through which contemporaries thought collectively and in public about some of the most pressing and taboo subjects of the day. Here the plays were to operate as historical sources, either through tracts, position papers, political correspondence or sermons to name but a few. In other words, by the stuff upon which a certain sort of historical research, that is to say my sort of historical research, conventionally rests.

However, as I got further into both the plays, and indeed into the pamphlets, it became obvious not only that these materials could not successfully be combined within the confines of one book, but also that to deal adequately with the plays would involve an engagement with a whole range of other literary and theatrical issues. And so reluctantly, and by the back door, I came to write a book about Shakespeare. That is to say a book about the ways in which a variety of history plays, most of them by Shakespeare, can be read as using the historical events they stage to consider events, issues, and sometimes even (albeit tangentially and fleetingly) persons central to the ‘history’ within which the plays were being written and to which, this book argues, they were being sometimes very directly addressed. This led me to put Shakespeare’s history plays in dialogue both with one another and with the existing repertoire of history plays, many of which Shakespeare was in the act of rewriting. In so doing he was presenting his audience with alternative versions of already well known, and often well-loved narratives, and thus conducting in public, before audiences of thousands, a series of arguments about both ‘history’ and ‘politics’. This enables us to watch Shakespeare engage with some of the central issues, events and non-events of the fin de siècle. 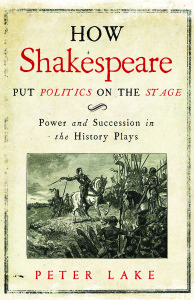 Peter Lake is university distinguished professor of history, professor of the history of Christianity, and Martha Rivers Ingram Chair of History at Vanderbilt University. He divides his time between Nashville, TN, and London.

A Book Lover’s Gift Guide: The Dedicated Follower of Fashion