Medieval Jerusalem was a vibrant international centre, home to multiple cultures, faiths and languages. Jerusalem, 1000-1400: Every People Under Heaven, which accompanies The Metropolitan Museum of Art exhibition on show until 8 January 2017, explores work from Christian, Jewish and Islamic traditions, highlighting the patrons, artists, pilgrims, poets and scholars who represented or adorned the multicultural Holy City. It is the first publication to focus on the 11th to 14th century, a moment of unparalleled creativity in this city’s complex history. 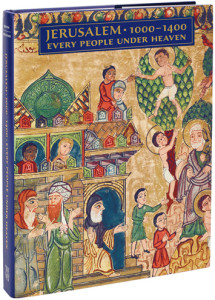 Through insightful essays and nearly 200 works of art, Jerusalem, 1000-1400: Every People Under Heaven examines how Jerusalem sparked the creative imagination of residents and foreigners alike, providing both real and imagined views of the medieval city that served as the crossroads of the known world. Rachel High, on behalf of The Metropolitan Museum of Art, had the opportunity to speak with curators Melanie Holcomb and Barbara Boehm about the medieval city of Jerusalem, the process of putting together this ambitious catalogue, and what their fascination with medieval Jerusalem has in common with their love of New York City.

Rachel High: Could you talk about the subtitle of this book and exhibition? What does ‘Every People Under Heaven’ mean and where does it come from?

Melanie Holcomb: It comes from a quote of a bishop of the time who describes the city as being frequented by ‘every people under heaven.’

Barbara Boehm: In addition to angels.

Melanie Holcomb: Yes, it’s trod by the feet of angels and frequented by every people under heaven. It’s a phrase that he actually takes from the Acts of the Apostles. He’s not alone in that understanding of the city; he just says it in a nice way. The notion of a diversity of people, a rich mix of people, in Jerusalem is something that you find again and again in the sources of the time.

Barbara Boehm: We think the quote gives a sense of all the peoples, all the different modes of dress, and all the language in the city, and that’s what fascinates us, which is why we chose it as the subtitle of the book and exhibition.

Rachel High: The book contains quite a few maps and city views of medieval Jerusalem that were made between 1000 and 1400. It’s interesting to see what is included in some maps and omitted in others. In a way this book also functions as a map to the art and culture of the medieval city. How did you decide what to include?

Barbara Boehm: So much of the old city today ultimately traces to the time between 1000 and 1400, so we tried to emphasise that in our selection of images.

Melanie Holcomb: There are several essays by a range of scholars within each chapter of the catalogue. These draw out aspects of the city that people don’t know about, some unexpected perspectives that might surprise our readers.

Barbara Boehm: The essays evolved as we spent more time in the Holy Land. The text about Mar Saba and the discussion of scholarship in Jerusalem was a result of actually going to Mar Saba – this magical place in the desert – and realising that it has this rich literary and cultural heritage. This essay wasn’t a part of our early table of contents. There were already objects coming from Mar Saba, but after visiting we realised we needed to develop this section specifically.

Melanie Holcomb: And that was also true of Maimonides. We came to realise that Maimonides was coming up again and again in the process of putting together the catalogue and exhibition – not only in the kinds of objects we were choosing, but also in some of the narratives that were emerging from the time. It became clear that he needed to be represented, and though he is one of the most well-known figures of this period, no one had really talked about him in relation to Jerusalem. So as Barbara said, what we included was part of the evolution of the book.

Barbara Boehm: The chapter entitled ‘Holy War and the Power of Art’ was another great example of that. We had included some discussion of holy war within the section on sacred art, but Publisher and Editor in Chief Mark Polizzotti realised that it needed to stand on its own. We had embedded it, in a way, because we were a little bit afraid of it. We thought what can we contribute this story of the Crusader period? There are so many histories of the Crusades, but when Mark gave us license to discuss it, we realised the question we needed to ask was ‘what role does art play there?’ We focused on art, not just as illustrative of the period but also how art was involved in the process and served as propaganda.

Rachel High: Some works in the book were not made in Jerusalem but rather made about Jerusalem. How did this city influence the culture and creation at the time?

Melanie Holcomb: That really gets to the crux of the show and exhibition because very few of these works were made in the city. They might have been brought into the city or exported from it, others were inspired by the city. Some of the objects were made by people who had never been there. The interesting thing here is that, at this moment, Jerusalem is such a powerful inspiration for works of art. Some of this reflects what the city itself is like, and some of it represents how it figures in peoples’ imagination.

Rachel High: The book refers to the fact that the medieval city of Jerusalem was not much bigger than Midtown Manhattan. Besides size, do you see any other parallels between medieval Jerusalem and New York City today?

Barbara Boehm: Even today when you walk through the old city of Jerusalem – and this was certainly true for the medieval period – you hear so many languages, one after the other. Of course, that also happens in New York; that’s one of the things we love about New York. It’s one of the things we love about walking up the front steps of The Met as the tourists are arriving, making a modern-day, secular pilgrimage to The Met. People come in all kind of different costume, speaking numerous languages, just as they did to the city of Jerusalem.

Yale author Nicholas Thomas has been awarded the prestigious Wolfson History Prize for his book Islanders: The Pacific…