Scott Solomon, an evolutionary biologist, provides surprising insights into the future of Homo sapiens as he introduces his new book Future Humans and asks, has culture replaced natural selection?

In today’s world, it’s easy to imagine that the evolutionary forces that gave rise to our species are no longer at work. Nature may be “red in tooth and claw,” as Tennyson observed, but the callous forces of nature seem hardly to affect us when we live in climate-controlled environments, grow food at industrial scales, and have chemical and technological solutions for injury, disease, and infertility.

Indeed, improvements in access to healthcare, nutrition, and medicine have driven infant and child mortality rates so low that 99.4 percent of babies born in the United States now survive into adulthood. We also have more control over our own reproduction, with more than half of women around the world using some form of modern contraception. Likewise, babies born as a result of assisted reproductive technology like in vitro fertilisation comprise a growing proportion of the population.

With both survival and reproduction, the main ingredients of natural selection, increasingly under our control, it is tempting to suggest that culture—defined broadly as a set of beliefs, practices, and behaviours that can be transmitted between individuals—is replacing natural selection as the primary means by which our species evolves. Yet culture and natural selection are not mutually exclusive catalysts for changes to our biology and behaviour. Rather, they interact in complex ways, such as those listed below, that are affecting our ongoing evolution.

There can be no doubt that our species has undergone dramatic changes as a result of our ingenuity and ability to communicate complex information to one another over space and time. But because both our genes and our cultures are passed from one generation to the next, impacting survival and reproduction, both forces—separately and concomitantly—will continue to affect our species long into the future. 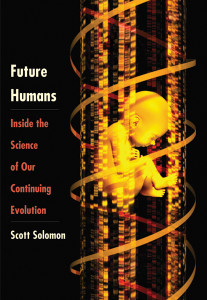 Scott Solomon is an evolutionary biologist, science writer, and author of Future Humans: Inside the Science of Our Continuing Evolution. He teaches ecology, evolutionary biology, and scientific communication at Rice University, where he is a Professor in the Practice in the Department of BioSciences. He lives in Houston, TX.

David Keen is the author of the controversial new book Useful Enemies: When Waging Wars is More Important Than…