One of this winter’s landmark exhibitions has been Opus Anglicanum: Masterpieces of English Medieval Embroidery, at the Victoria and Albert Museum. To accompany the show Yale published the exhibition catalogue English Medieval Embroidery, edited  by V&A curators Clare Browne and Glyn Davies with M. A. Michael, professorial fellow, School of Culture and Creative Arts, University of Glasgow. We invited M. A. Michael to discuss some of the key elements of the show and to describe what he feels are some of its highlights.

English Medieval Embroidery at the V&A • An appreciation by M. A. Michael 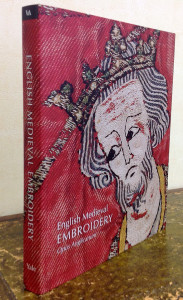 The reaction to the Exhibition and Catalogue since its opening at the beginning of October has been tremendous. The exhibition is the first comprehensive show of English Medieval Embroidery since 1963 and the catalogue illustrates the textiles in colour through the use of detailed digital photography, the first time in any publication. What is so pleasing is that everyone from all walks of life has responded to the beauty of the textiles, recognising the dedication, care and skill that each individual stitch reveals. It has brought us into direct contact with the hands of the women and men who made these objects, but it is clear that women played an important role in the making of embroidery during the Middle Ages. Many women embroiderer’s names can be found in the thirteenth and fourteenth century records from Mabel of Bury St Edmunds, whose work so impressed the King Henry III that he had experts from the City of London judge the worth of her embroidery so that she should not be underpaid, to Christiana of Enfield and Alyce Darcy in the fourteenth century. Even poor Alice Catour who was apprenticed as a girl in the shop of Elias Mympe, was beaten and cajoled and even given an illegally short contract, was protected by the laws of the City of London and her father sued Elias and was able to gain compensation on her behalf.

‘What is so pleasing is that everyone from all walks of life has responded to the beauty of the textiles, recognising the dedication, care and skill that each individual stitch reveals.’

Such a story tells us as much about the well-organised nature of the production of Embroidery in England and the status of even its most junior trainees than it does about Elias’s exploitative behaviour. The wealthy Rose Romayn, daughter of a Thomas Romayn, Mayor of London, is also typical of the way the merchant business classes of London could act as ‘middle-men’ for the supply of embroidery. Such embroidery, particularly for the Church, was one of the most expensive items that could be ordered by any prince or prelate in Europe at the time. Rose clearly acted on behalf of Queen Isabella, wife of Edward II in the supply of embroidery in one case, but as is so often the case with the super-rich, she had difficulty recouping her the money owed to her. 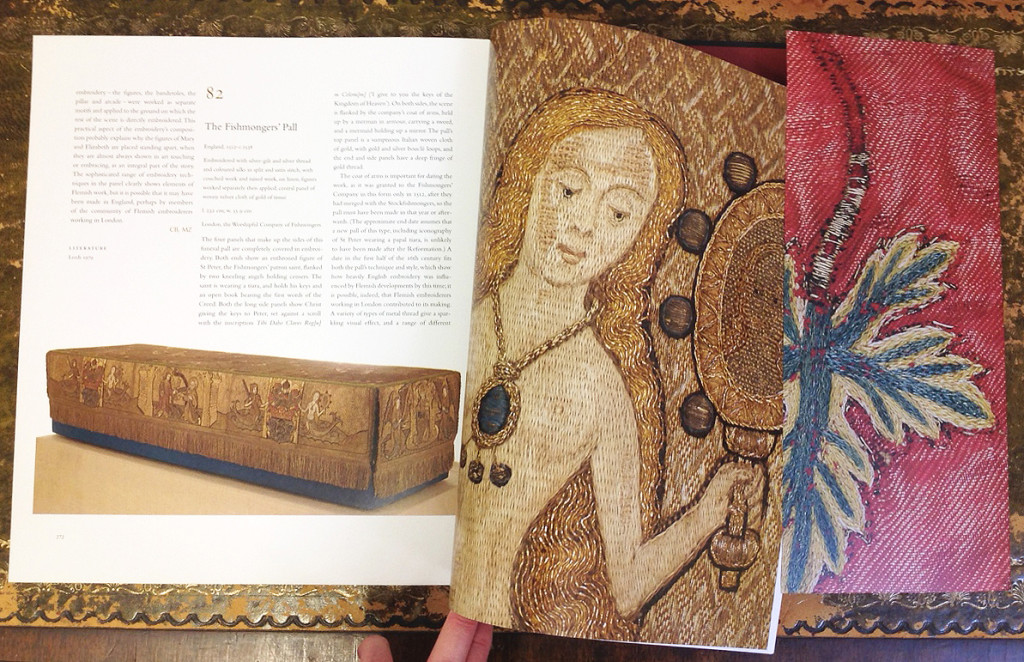 Much of the secular embroidery of the Middle Ages has been lost, but the inclusion of the achievements of the Black Prince and what, in all probability, is a horse trapper made for Edward III in the exhibition, has been a real revelation. Their sumptuousness giving testimony to the splendid and colourful culture of clothing that must have typified the Middle Agers. These objects are outnumbered by the wonderful Copes, Chasubles and Orphreys that have survived in larger numbers because they have been preserved in the cathedral treasuries of Europe and, often secretly, by English Catholics after the reformation (the s-called ‘recusants’ who carried on in their Catholic faith despite their religion being essentially outlawed by the state until the Roman Catholic Relief Acts of 1791 and 1829). 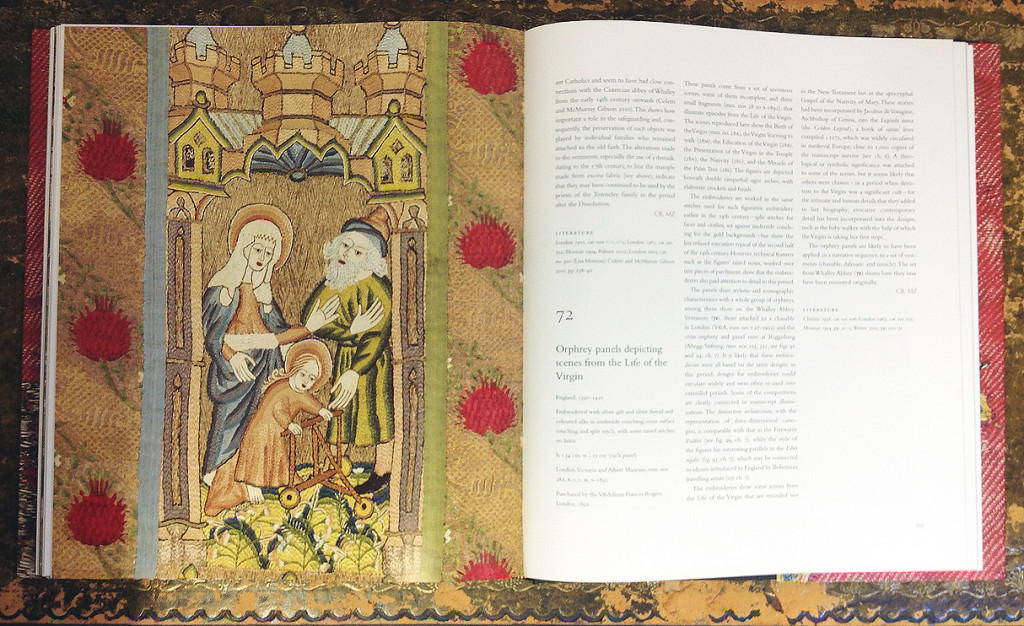 For me it is the embroidery in the service of the Church that holds the most potent testimony of life in pre-reformation England. It is the way English embroidery combines secular interests, naturalistic depictions of animals, birds, trees and flowers with the deep meaning of the Christian iconography that speaks to us now. The depth of their belief, which displays a real joy and thanksgiving for the lives of saints and the incarnation of Christ as Saviour, may now be difficult for us to understand, but its honesty and integrity is revealed through the dedication and hard work that went in to the production of these textiles. The investment in money that those who commissioned these textiles made can only be compared with the most extravagant purchases of the super-wealthy of our own times. However, the copes and chasubles that have been preserved for us to admire in the exhibition, were, in the end, not destined only for an individual to see, but for use in the Church, through each celebrant and participant in the liturgy to use collectively. 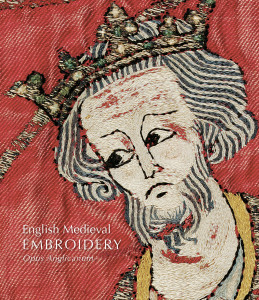 The Shahnama of Shah Tahmasp: Reconstructing a masterpiece of Iranian literature and art

This month sees the publication of an exciting new Metropolitan Museum of Art publication, which reproduces for the…