Andrew Stewart introduces his new book The First Victory: The Second World War and the East Africa Campaign, a riveting account of the long-overlooked achievement of British-led forces who, against all odds, scored the first major Allied victory of the Second World War.

The First Victory: An Introduction

My latest book, The First Victory: The Second World War and the East Africa Campaign, examines one of the war’s great, but almost entirely overlooked, military campaigns. When the first shots were fired in the summer of 1940 along the Sudanese and Kenyan borders there was a great deal of interest across the British Empire in this expansion of the war into a hitherto largely ignored region. With France close to collapse the “Italian jackal”, Benito Mussolini, had launched a treacherous assault on those imperial territories in Africa which bordered his own. This was the same Duce who only a few years before had been ‘accommodated’ despite his clear war of aggression, the crimes carried out by his military forces in Ethiopia – of which there were many – being overlooked in the fanciful hope of maintaining an already largely illusionary balance of power and European stability. As the ‘Finest Hour’ developed and Britain and its imperial allies stood firm in their determination to defy and irritate their continental European adversary, opportunities to highlight any semblance of military success were welcomed in London by politicians and the public alike.

With the ejection from Europe and the beaches of northern and western France there had been a radical enforced rebalancing of the coalition opposed to Adolf Hitler: as of 23 June 1940 this meant what was left of those militaries that had been defeated and fled into exile, largely in Britain, where they stood alongside the ‘might’ of the British Empire, in reality at this stage little more than a potential fighting power. The most attractive strategic option for this ad hoc group of frustrating and illogical resisters (Hitler never understood the continuing belligerence of his sole remaining active opponent) seemed to be to concentrate what resources did remain against Italy. There was a merit to targeting what appeared to both military planners and many commentators in the media to be the weak link in the Axis alliance. Mussolini had made his own imperial hub in Eritrea, Italian Somaliland (modern-day Somalia) and with the late addition of Haile Selassie’s former kingdom but it was clearly geographically challenging in so much as there were considerable distances to be covered to maintain the connection with the metropolitan base. This East African Empire therefore became the focus of both thought and activity as both sides prepared to contest the position.

‘The defeat of Italian forces and their forced removal from East Africa and the Horn of Africa represented a huge success and a first victory for the British-led alliance that had carried out the fighting.’

With the main effort determined, in the almost classic manner of British military operations there was almost immediately a disaster. The loss of the protectorate of British Somaliland represented the first military reverse suffered by a British imperial garrison – the Channel Islands having been evacuated without the fighting of any battle – fortunately took place against the backdrop of the summer of ‘The Few’ and the battle for air supremacy that was fought over Britain’s skies. Nonetheless the prime minister Winston Churchill came to view it as an inglorious episode, albeit not in the same category as the seven months of calamity that would follow from the defeat of Hong Kong to the surrender in June 1942 of the garrison at Tobruk, and proposed enquiries, court martials and even a repeat of Admiral Byng’s fate which he argued might act as a valuable learning experience. The head of the Middle East Command was never forgiven by the British leader, both for the embarrassment caused to him by the defeat and for the temerity of the responses given to him in trying to explain what had actually happened. As the book discusses, that this involved the application of entirely pragmatic military logic was of little consequence: a second major defeat of 1940 was really nothing more than a strategic withdrawal and the re-direction of available forces to a potentially more decisive point. That this individual having to explain himself was General Sir Archibald Wavell demonstrates that there are still fascinating aspects of the war’s often complex civil-military relations to be examined in greater detail (this particular example is a key discussion point throughout ‘The First Victory’).

Despite the near collapse in relations between the political and military levers of power, the commander in the field persevered with his preparations and organisation of his forces and Wavell’s subsequent leadership of the war’s great but under-recognised campaigns was a remarkable achievement. Whilst preparing for an attack against the Italians in North Africa – Operation ‘Compass’ – he also provided what support he could spare to two highly capable theatre commanders who were given responsibility for the mutually supporting Operation ‘Canvas’. For his subordinates in the Sudan and Kenya, their role was to safeguard his southern flank and secure Wavell’s maritime supply lines through the Red Sea. This helped bring troops and equipment to his principal base of operations, Egypt, from where they would drive westwards and force the Italians back. In East Africa the initial objective therefore was not necessarily of defeating the Italians but keeping them occupied whilst driving through their defences to secure the littoral. General Sir William Platt had control of a largely Anglo-Indian force but which also included Sudanese troops, men from the French and Belgian African territories and an irregular force for which Orde Wingate would later claim much of the credit. To his south General Sir Alan Cunningham, whose brother was the acclaimed maritime commander in the Mediterranean, was tasked with driving north from Kenya towards the Ethiopian capital of Addis Ababa, a distant centre of gravity but one which like Baghdad in 2003 was believed to underpin and hold together the cohesion of Italian regional power.

Within days of starting his advance, in February 1941 he would fight one of the two decisive military actions of the entire campaign – the other being the battle fought by Platt’s troops further north in the mountains of Keren – and break his opponent both physically and mentally with the capture of the critical port of Kismayu. From here his coalition forces drawn largely from across the African continent, units as the King’s African Rifles and the Kenya Regiment with their seconded British officers and NCOs who were to provide experience and leadership, next conducted one of the great military exploitations of the entire war. The heart of the Italian East African Empire was reached in April 1941, a remarkable advance of more than 1700 miles from the Kenyan frontier in just fifty-three days during which 360,000 square miles of enemy-held territory was liberated and more than 50,000 prisoners captured. Cunningham’s losses were 135 men killed, 310 wounded and another fifty-nine missing and it was a feat which rivalled anything that would follow at any stage of the war.

Although the scale of the Italian military defeat was overwhelming, the fighting would, however, carry on for several more months. The Duke of Aosta – who had been the unfortunate Italian viceroy – withdrew into the mountains and refused to surrender. Some of his subordinates also showed their resolve to slow down the advance of the British and Commonwealth forces in the hope that help might yet come from their German ally. None arrived and the final garrison, which had been isolated at the entirely surrounded mountain outpost of Gondar, was the last to raise the white flag on 27 November 1941 allowing the authorities in London to acclaim a military and political triumph that had been secured at minimum cost. The public recognition was, however, almost entirely muted, the focus of its attention. The outcome of events in East Africa were lost in the battles then taking place further north, where the only recently constituted Eighth Army was seeking to regain the advantage with Operation ‘Crusader’, and even further beyond as Russian and German forces continued their increasingly visceral contest and a race to Moscow. With tensions also appearing to grow to potentially unmanageable levels in the Far East, there was a mounting sense that this was poised to become a genuinely world war.

Irrespective of how it was remembered at the time, the defeat of Italian forces and their forced removal from East Africa and the Horn of Africa represented a huge success and a first victory for the British-led alliance that had carried out the fighting. This new book will provide further description and explanation about this overlooked but vitally important campaign and, in so doing, leave its readers with a better informed understanding of the Second World War.

An introduction to this blog can be found at https://defenceindepth.co/2016/10/21/the-first-victory/ 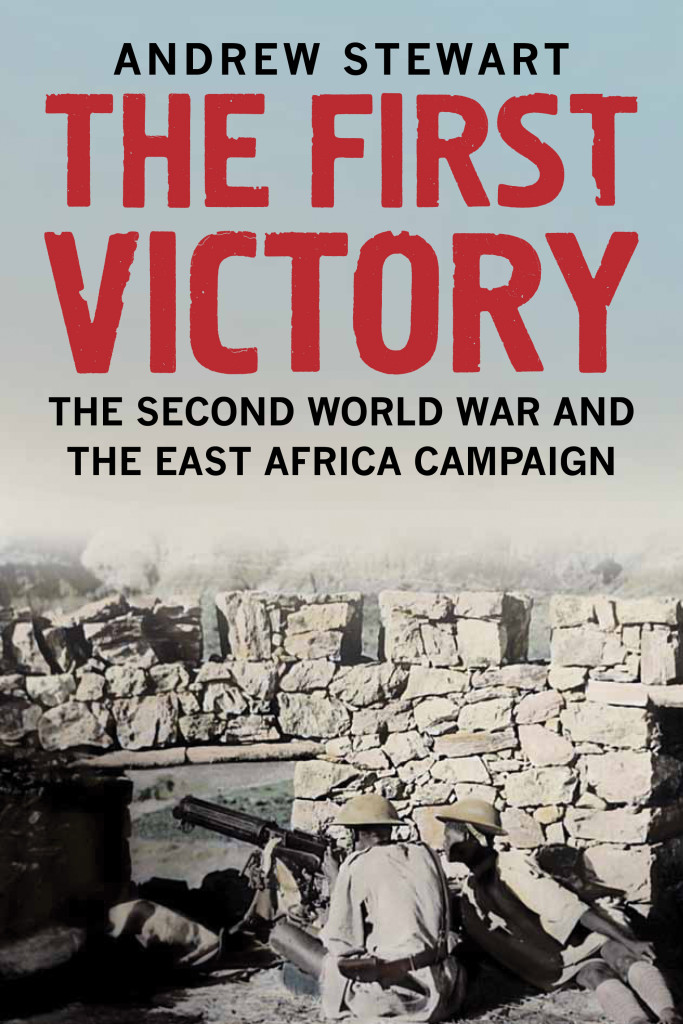