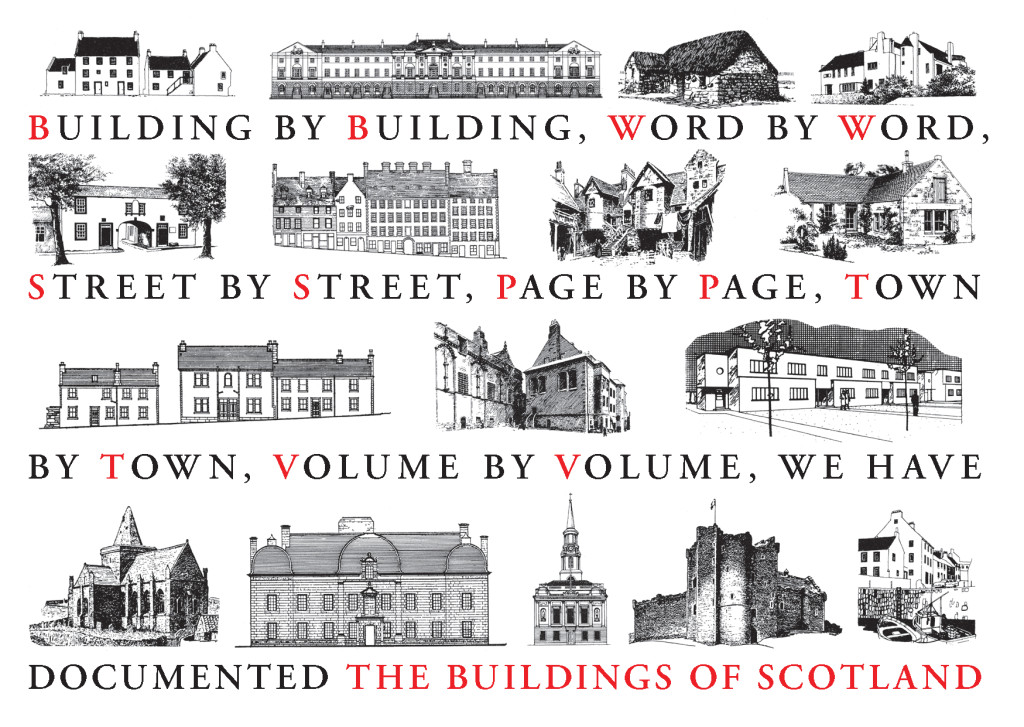 ‘It’ll be a sort of Scottish Pevsner, then?’ 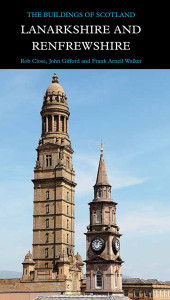 This was the reaction of an unnamed station master at Dunbar station when, as Colin McWilliam recalled, he had attempted to explain the purpose of his fieldwork for the Buildings of Scotland guide to Lothian, published in 1978.

The history of the decision to provide Scotland with a series of guides modelled on the Buildings of England books goes much farther back in time, to the mid-1950s when Nikolaus Pevsner was a quarter of the way through his work but could anticipate the need for guides not only to Scotland but also to Wales and Ireland. In the Buildings of England archives is a letter from Pevsner, written in November 1959, in response to a suggestion from the architectural historian Andor Gomme that he should produce a Buildings of Scotland series: 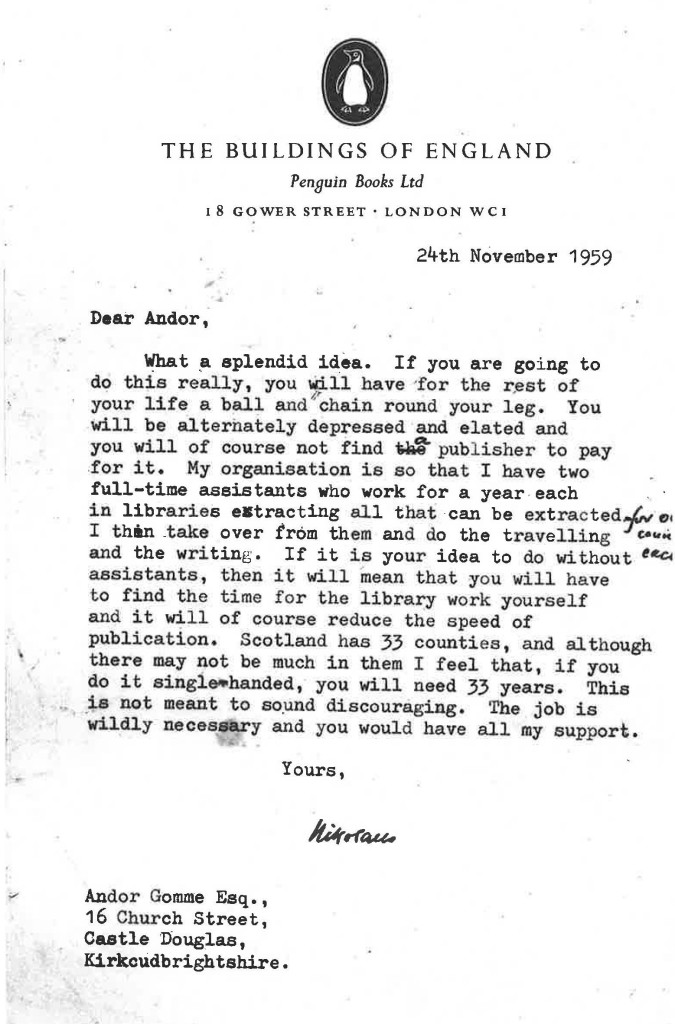 In fact, the task for realising the series was grasped instead by Colin McWilliam, who by the mid-1970s was assistant secretary with the National Trust for Scotland, an organisation which played a critical role in helping to fund the research and writing of the early Scottish volumes.
Pevsner’s assessment of the years that it would take to complete the guides was, in retrospect, a little optimistic.

After the publication of Lothian, the principal task was the writing of the volume for the major cities: Edinburgh (1983) and Glasgow (1990), the latter coinciding with it being appointed the City of Culture. Both volumes set new standards of coverage of urban buildings – taking advantage of the larger format of guide introduced by Penguin for London: South in 1982 – and the same expansion of ambition was found in the guides to the largely rural areas of Fife and Highland and Islands. The last two were written by John Gifford (1946-2013), who started work on research for the series in the 1970s and oversaw the massive task of primary and secondary research for all but one of the books eventually published, as well as writing the guides to Dumfries and Galloway, Perth and Kinross, Dundee and Angus. The remaining guides were taken forward by other authors for Argyll and Bute and Central Scotland (by Frank Arneil Walker), Borders (by Kitty Cruft, John Dunbar and Richard Fawcett), Ayrshire and Arran (by Rob Close and Anne Riches) and Aberdeenshire and Moray (in two volumes by Joseph Sharples, David W. Walker and Matthew Woodworth).

The final brick in the wall is the volume for Lanarkshire and Renfrewshire, a collaborative work in the best sense, bringing together the talents of several authors who have previously contributed to the series. Frank Arneil Walker has taken on the whole of the gazetteer for Renfrewshire with the exception of Paisley Abbey, which is by Richard Fawcett, Scotland’s principal historian of its medieval church architecture. John Gifford began work on Lanarkshire and had covered much of the Clydesdale region before his untimely death. In his stead Rob Close took on the role of writing the remaining entries for the towns and villages of the county with much assistance from Fiona Sinclair, especially on the country houses, Diane Watters, Miles Glendinning and David W. Walker. Together they have helped achieve Colin McWilliam’s objective for the series ‘to present all the buildings that merit attention on architectural grounds, to do it for the whole country and to do it with all possible speed’.

Charles O’Brien is co-editor of the Pevsner series, and author of several individual books in the series, most recently Houses.

Lanarkshire & Renfrewshire, the final volume in the Buildings of Scotland series is published on the 15 November 2016.

A list of the now complete volumes of the Buildings of Scotland series can be found here.

‘I open my new book. What will you tell for the next year. To bring forth a new…