Noam Chomsky – founder of modern linguistics and the world’s most prominent political dissident – is the subject of a fascinating new study by Chris Knight. Decoding Chomsky: Science and Revolutionary Politics argues that the tension between Chomsky’s military funding and his role as linchpin of the political left pressured him to establish a disconnect between science on the one hand and politics on the other.

In this short article, Knight introduces his book offering a new perspective on one of the twentieth century’s most influential and controversial minds.

An Introduction by Chris Knight

As an admirer of Noam Chomsky’s politics, I always found myself facing a conundrum when attempting to link this side of his life with his science. As far as I could see, the two Chomskys – the dissident and the linguist – had nothing to do with each other. They didn’t even seem to be on speaking terms. It was the difficulty of imagining such a disconnect which led me to start writing this book.

If Chomsky is celebrated as the world’s foremost public intellectual, it is because of his role in championing the ‘Cognitive Revolution’ which swept through psychology and related sciences during the 1960s. One effect of this was to remove linguistics from its former status as a discipline within anthropology, establishing it as a natural science linked closely with information technology and computer science. Computers don’t have feelings, intentions or social relationships: they just compute as they are designed to do. For Chomsky, correspondingly, language itself is a kind of digital computer installed by some unknown agency in the head. It exists but it did not evolve. It is not political, not cultural and not even social. It is not even designed for communication!

Coming from my background in social anthropology, and as a trade unionist and political activist, I could not make sense of any of this. Was that because I was deficient in training or intelligence? Or was it because this kind of linguistics emerged to serve particular needs for a specific community at a certain time and place?

I decided to approach the problem as an anthropologist might. What were the motives and loyalties of the tribe of thinkers who originally found value in these ideas? During the early years of the Cold War, Chomsky’s job was to work on machine translation in one of the Pentagon’s major centres of weapons research – MIT’s Research Laboratory of Electronics. As I traced this history, it turned out that Chomsky’s unusual view of language was encouraged and appreciated in the first instance by computer scientists working on military systems of command and control in the nuclear age.

The more closely I looked into all this, the more clearly I realized what the problem was. Chomsky was torn. He loved his job, but at the same time, as he has often explained, he needed to look himself in the mirror without too much shame. He refused to collude with anything which might end up killing people.

The pressures he experienced had the effect of splitting him in two, prompting him to ensure that any work he conducted for the military was purely theoretical – of no practical use to anyone – while his activism was preserved free of any obvious connection with his science. To an unprecedented extent, mind in this way became separated from body, thought from action, and knowledge from its practical applications, establishing a paradigm which came to dominate much of intellectual life for half a century across the Western world.

If you have ever struggled to understand Chomsky’s idealized, formalistic, disembodied and humorless ‘Cartesian’ concept of language, wondering where all this came from, you may find what you are looking for in Decoding Chomsky.

Chris Knight is currently senior research fellow in the Department of Anthropology at University College London, exploring what it means to be human by focusing on the evolutionary emergence of language and symbolic culture. He lectures regularly for The Radical Anthropology Group and his website is www.scienceandrevolution.org. 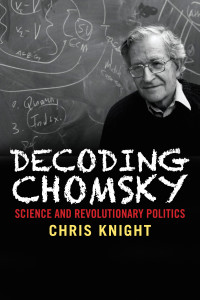 by Malcolm Vale, author of Henry V: The Conscience of a King – ‘By the kyng. Trusty and…