October 14th 2016 marks the 950th anniversary of 1066, the Battle of Hastings and the Norman Conquest. The defeat of England’s last Anglo-Saxon king, King Harold, changed the course of British history forever. David Bates takes a fresh look at the year 1066 and a major reinterpretation of a pivotal figure in English history, William the Conqueror.

950 Years On by David Bates

When I started work on a new William the Conqueror in the English Monarchs series in 2000, I thought that it would mostly involve taking account of the huge quantity of existing scholarship and building on my previous work, above all on Normandy before 1066 (1982) and my edition of William’s post-1066 charters (Regesta Regum Anglo-Normannorum: The Acta of William I (1066-1087) (1998)). Any complacency that I then felt was rapidly exploded as I re-read supposedly familiar primary sources and began to reflect seriously on the intellectual context that had to shape the biography. By 2003 I had started to grasp that a very different book from the one initially envisaged needed to be written. At that point, however, life (as they say!) took over in surprising ways and William received only intermittent attention for almost a decade. In retrospect I can see that I was continuing to think about the book during the whole of that period. When I resumed concentrated work in 2012, I had a much clearer idea of how difficult the subject was and some idea of how I wanted to treat it.

Robert Baldock’s suggestion that I write a Prologue reflecting on the book I was replacing in the series, David Douglas’s William the Conqueror, focused my mind on the ethical problems that anyone who writes about William the Conqueror must face, problems that had also troubled Douglas and which I then grasped had also troubled all the main eleventh- and twelfth-century writers who had dealt with his life. It also led me to try to bring into focus the vast changes in approaches to the study of the past that had occurred since the novocentenary of the Battle of Hastings in 1966, an anniversary that occurred while I was an undergraduate student. An earlier landmark was the invitation to write the British Academy’s memoir of my PhD supervisor Frank Barlow, to whose memory my book is dedicated. Perusal of his professional papers and a re-reading of many of his publications led to me having to consider the processes that led him to write biography in the way he did. I also again felt his exacting scholarly standards guiding me, as they had done between 1966 and 1970. A third landmark was the generosity of the University of East Anglia in funding the post that enabled me to write the Ford Lectures (published as The Normans and Empire in 2013) and the University of Caen Normandie and the Conseil Régional de la Basse-Normandie in inviting me to take up the Chaire d’Excellence that I held from 2009 to 2012. In the midst of this, influences again re-surfaced that took me back to my days as a postgraduate and as a young Lecturer and that have always been part of my professional life, namely an awareness that there was much manuscript material in France that awaited analysis and a feeling that I was at home when I was working there. The Normans and Empire also led me to emphasise even more than I had ever done previously the long-term historical importance of the cross-Channel empire that William established and the priorities that his actions and decisions before and after 1066 reflect.

This book’s reassessment of many of the major episodes in William’s life arises in part from a detailed analysis of the evidence, with some of it, as far as I can see, not having been taken seriously since the nineteenth century. In terms of a biography, my treatment of William’s early life changes a great deal, I think. In terms of more specific episodes, my favourite reappraisals are those based on the Flemish charter that shows that Harold and Guy, count of Ponthieu, knew each other and on the account of William’s prostration before Archbishop Ealdred of York. Alongside this, I have become increasingly aware how much disciplines other than the narrowly historical have a great deal to offer. In particular, I became increasingly interested in cultural history and the potential offered by anthropological approaches used by scholars working on earlier historical periods and less frequently deployed in relation to the eleventh century. These lead on to an awareness of the sheer depth of the long-anticipated crisis that hit England in 1066. In this context to think of William and Harold in ‘good guy/bad guy’ terms is a gross simplification. But it also leads on to a reassessment of those crucial English years of 1066 to 1072.

I knew all along that I had to face the ethical issues of violence used in what its perpetrators believe to be a legitimate cause and how eleventh-century contemporaries understood them and how William dealt with them in practice. Also, even though my priority was to write a biography, some comment on England’s and Britain’s place in Europe and on national identity, subjects of immense relevance to our preoccupations in October 2016, was unavoidable. My book shares an aspiration with Douglas’s to transcend the boundaries of national historiographies and, in particular, Anglophone and Francophone ones. I end, as I must, by stating that, having written a biography of a conqueror, the subjects that have to follow on from it are a new long-term assessment of 1066’s historical significance that covers the period from 900 to 1300 and a focus on the life-histories of the many individuals on both sides of the Channel caught up in the momentous events my book deals with, often as victims. 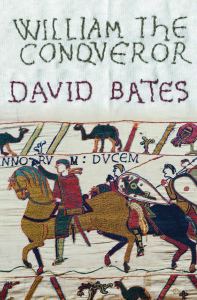 David Bates is professorial fellow, University of East Anglia, and has held positions at several universities in Britain and France. His books include Normandy Before 1066 and The Normans and Empire.

Art and Architecture of Ireland: From Start to Finish

A new group of deeply researched books covering the Art and Architecture of Ireland (AAI) in 5 volumes, is…