Psychology, Art, and Antifascism, by Louis Rose, explores the work of the leading Viennese psychoanalyst Ernst Kris and the path-breaking art historian E.H. Gombrich, whose studies of caricature bridged psychological theory, artistic experimentation, and antifascist politics.  Begun in interwar Vienna, their caricature project included essays, exhibitions, a wartime pamphlet, and, most importantly, a book manuscript.  It provided a point of contact between Viennese Freudians, the Warburg intellectual circle, British culture critics, and American social scientists.  In psychoanalysis, it proposed a new ego psychology and theory of creativity.  In art history, it helped initiate Gombrich’s landmark theories on perception and image making.  In the mental sciences, it marked an early path from depth psychology to neuroscience.  And in the Allied war effort, it became a starting-point for Kris and Gombrich’s analyses of German propaganda.

Masters of magical techniques, most caricaturists never fully justified their reductionist or destructive aims. Only those committed to a transformative vision intuited the full creative potential of caricature. In his pure allegiance to classical form and his absolute commitment to documentary content, Daumier had created the republican hybrid: political artwork that was true art. He readjusted his audiences’ perceptions by helping them to see their accepted views of society as distortions. Caricature held up a corrective, not cracked, mirror to reality. To recover its purpose as political art, it had to revert to what it had been in Renaissance Bologna and Daumier’s Paris: a classical experiment of the street.

The caricature manuscript offered, in Gombrich’s phrase, a model of integration, one that approached image making and creative experimentation as evolving processes moved by intersecting and conflicting currents from art, psychology, and politics. Grounded in the Freudian principle of the over determination of meaning—now including cultural and political layers together with the psychological—it provided not only a language that bridged psychoanalytic and cognitive psychologies but also an awareness of the problems and methods that linked the humanities, the mental sciences, and the social sciences.

As depth psychology and art theory, Caricature identified the conflicting impulses of aggression and restitution that drove artistic experimentation from one period to the next. As ego psychology and art history, it traced artistic innovation as a ceaseless search for stable frameworks of cognition and vision. As a cultural history covering diverse media and images, it located the sources and aims of experimental activity not only in the studio and salon but also on the stage and in the city. Finally, it took into account how, especially at moments of crisis, societal conditions and political realities influenced artistic, technical, and cultural innovation. The rebellion within classicism started as a game with portraiture but became an experiment with politics. It merged symbolic, documentary, and critical imagery, giving rise to a civic art and a universal language capable of responding to the disintegrative effects of crisis. Yet by 1900, mutually reinforcing tendencies of self-isolation and public demagogy undermined it.

Kris and Gombrich’s conclusion that caricature culminated with Daumier and only began to recover its potential with Low reflected their judgement that it had all but lost its direction in Germany and Austria after 1900. German Expressionists embraced caricature but only to incorporate it within their psychological art, while nationalist, anti-Semitic movements transformed it according to their own demonologies. The book manuscript did not track these post-1900 developments in any detail. Rather, Kris and Gombrich would do so a few years later, when they worked as political analysts for the Allied war effort.

The manuscript’s most dynamic, intriguing, and innovative themes—that the truth of personality hid within and not behind the mask, that visual and mental images possessed a switch character, and that gesture, expression, and perception were fluid, volatile phenomena—represented in crucial part immediate responses to the corrosive, deteriorating conditions in Vienna. At the museum and university, Kris and Gombrich recognised the switch character in the faces of colleagues and professors. And they could see in the labile countenances of Austro-Fascist politicians and their supporters the grinning, grotesque masks known since ancient times.

Looking back on his training as a chemist in the late 1930s, Primo Levi recalled in The Periodic Table the moment when he realised the vital importance of chemical impurities. Pure zinc, he discovered, did not react with sulphuric acid; only impurity elicited the reaction that created zinc sulphate. Levi drew the political and moral conclusion, presented as a dialogue with himself:

In order for the wheel to turn, for life to be lived, impurities are needed, and the impurities of impurities in the soil, too, as is known, if it is to be fertile. Dissension, diversity, the grain of salt and mustard are needed: Fascism does not want them, forbids them, and that’s why you’re not a Fascist; it wants everybody to be the same, and you are not. But immaculate virtue does not exist either, or if it exists it is detestable.

More than a century before Levi wrote those words, Daumier exalted the bella deformità, the grano salis, as the universal language of republicanism. His and Levi’s insight marked the authentic culmination of the Bolognese experiment.

The story of caricature that Kris and Gombrich wrote from 1934 to 1937 moved from a study in the psychology of art to a study of republican political culture. The story’s conclusion came when caricature, serving as a tool of marketeers and propagandists, became a source of advertising formulas and demagogic typologies. Ceasing to document social and political realities, it failed to preserve or integrate its life-giving impurities. And when it lost its vital links to republicanism, it ceased functioning as an ever evolving artistic innovation. The symbiosis broke down and it became a deadened and deadening form. As a record of that story, however, the caricature manuscript itself remained an experimental grain of salt, a bella deformità, within a Vienna that now tried to dissolve all irritants within a new national body.

Louis Rose is professor of history at Otterbein University, executive director of the Sigmund Freud Archives, and editor of the interdisciplinary journal American Imago.

Take a listen to his podcast for free here. 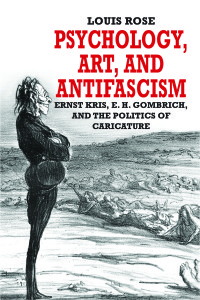 The Skin of Chaos: The Letters of Adonis and Adel Abdessemed, pt. 1

Presented exclusively by YUP in anticipation of the publication of Adonis’ newest book, Concerto al-Quds, We are delighted to…