From Presidential Government by Benjamin Ginsberg —

For most of the nineteenth century, the presidency was a weak institution. In unusual circumstances, a Jefferson, a Jackson, or a Lincoln might exercise extraordinary power, but most presidents held little influence over the congressional barons or provincial chieftains who actually steered the government. The president’s job was to execute policy, rarely to make it. Policy making was the responsibility of legislators, particularly the leaders of the House and Senate.

‘The presidency has become the dominant force in national policy formation’

Today, the presidency has become the dominant force in national policy formation, not all domestic policy springs from the White House but none is made without the president’s involvement. And when it comes to foreign policy and, particularly security policy, there can be little doubt about presidential primacy. Of course, Congress retains the constitutional power to declare war, but the power has not been exercised in sixty-five years. During this period American military forces have been engaged in numerous conflicts all over the world—at the behest of the president.

How did this transformation come about? To some, the study of the presidency is chiefly the study of personality and leadership in an attempt to distinguish between the attributes and conduct of strong and weak presidents or great, near-great and not-so-great presidents. Richard Neustadt, an influential presidential scholar, epitomized this focus on leadership styles and personality when he declared in 1960 that presidential power was the “power to persuade.” In other words, the power of the presidency was derived from the charisma of the president. Some scholars pushed this personalistic approach even further by engaging in psychoanalytic studies of presidents to determine which personality attributes seemed to be associated with presidential success. James David Barber’s well-known book, The Presidential Character is an exemplar of this school of thought.

The personal characteristics of presidents, though not unimportant, do not seem to offer an entirely satisfactory basis for explaining the transformation in the role of the president that has taken place in recent years. After all, while the power to persuade and other leadership abilities wax and wane with successive presidents, the power of the presidency has increased inexorably, perhaps growing more rapidly under the Roosevelts and Reagans and less so under the Fillmores and Carters of American politics but growing nonetheless. The president is, indeed, a person but the presidency is an office embedded in an institutional and constitutional structure and in an historical setting that limits some possibilities and encourages others. As Steven Skowronek has shown, leadership styles that are effective in one political era may be irrelevant or counterproductive in another.

Even presidential character and style are institutionally conditioned. Presidents today are generally more aggressive and ambitious than their predecessors because of an institutional change–a nominating process that tends to select for these characteristics by awarding the presidency to the survivor of years of harsh political struggles. And, as to the power to persuade, this formula was already beginning to be out of date in 1960 when it was introduced. The 1947 National Security Act had already vastly increased the president’s institutional power to command. Presidents were already becoming more imperial and less dependent upon the fine art of persuasion.

Accordingly, understanding the presidency requires what is generally called a historical-institutionalist approach. This perspective does not ignore leadership but, nevertheless, emphasizes history and institutions as the keys to understanding political phenomena. Presidential history is a guide to understanding the ways in which past events and experiences shape current perspectives and frame the possibilities open to presidents. Institutional rules, particularly the Constitution, help set the parameters for decision making and collective action.

Obviously, talented and ambitious presidents have pushed the boundaries of the office adding new powers that were seldom surrendered by their successors. But, what made this tactic possible was the inherent constitutional imbalance between the executive and Congress. Presidential power has grown less because of the leadership styles of particular presidents, and more because the Constitution puts Congress at an institutional disadvantage and provides the president with an institutional edge.

For example, presidents derive power from their execution of the laws. Decisions made by the Congress are executed by the president while presidents execute their own decisions. The result is an asymmetric relationship between presidential and congressional power. Whatever Congress does empowers the president; presidential actions, on the other hand, often weaken Congress. If it wishes to accomplish any goal, Congress must delegate power to the executive. Sometimes Congress accompanies its delegation of power with explicit standards and guidelines; sometimes it does not. In either eventuality, over the long term, almost any program launched by the Congress empowers the president and the executive branch, more generally, whose funding and authority must be increased to execute the law. In effect, every time Congress legislates it empowers the executive to do something, thereby contributing, albeit inadvertently, to the onward march of executive power.

As this example suggests, understanding America’s presidency requires us to do more than assess the relative merits of the presidents. It requires us to look carefully at the institution, its Constitutional place, and its history. The framers of the Constitution thought Congress would be the most important branch of government but the institutional structure they devised led to the gradual and inexorable growth of presidential power.

From Presidential Government by Benjamin Ginsberg, published by Yale University Press in 2016. Reproduced by permission.

Benjamin Ginsberg is the David Bernstein Professor of Political Science at Johns Hopkins University and chair of the Hopkins Center for Advanced Governmental Studies. He is the co-author of American Government: Power and Purpose, among other titles. He lives in Potomac, MD. 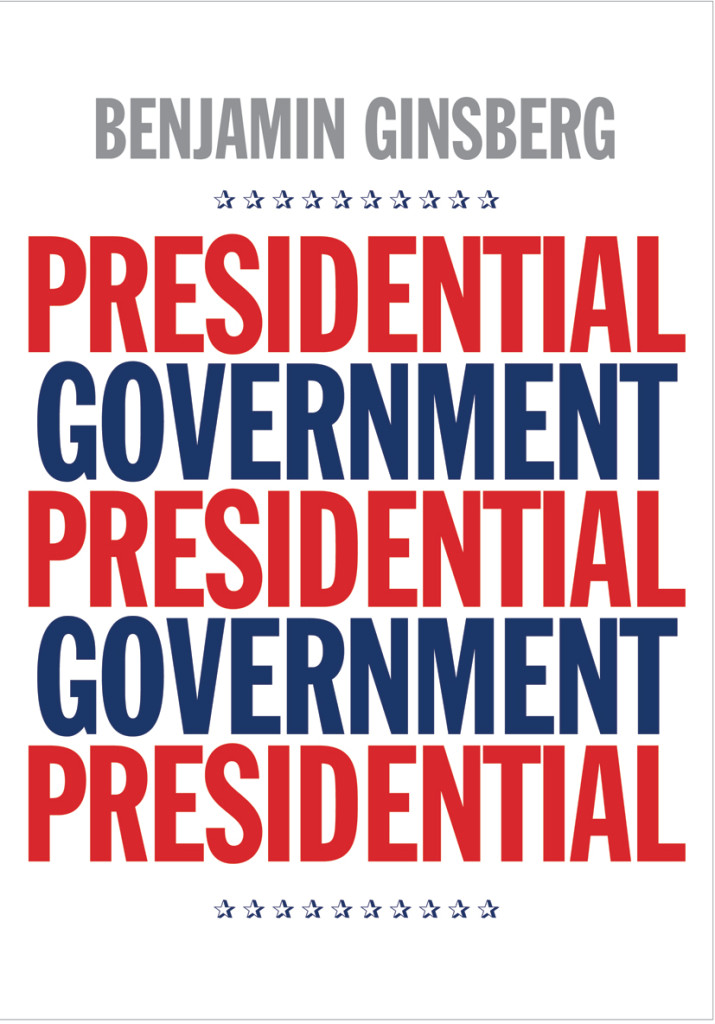 To mark the occasion of World Whale Day we have made a chapter from Chris Armstrong’s new book,…