‘This is tremendously good. Chris Wickham has an outstandingly keen and understanding eye for the diversities of life across a broadly-framed Europe, and for changes over time.’ – Len Scales, author of The Shaping of German Identity

1000 years ago in 1016, Cnut successfully invaded and conquered England to unite kingdoms and establish a North Atlantic powerhouse. The geographical map looks extremely different today, vast changes transformed Europe during the 1,000-year span known as the Middle Ages. In his spirited book, Chris Wickham tracks the pivotal crises and developments of the era century by century, from the breakup of the Roman Empire to the Reformation. The result is the most riveting account of medieval Europe in a generation.

Yale University Press is delighted to be attending the International Medieval Congress  at the University of Leeds on July 4th. Please stop by our stand to receive a special conference discount of 35%, or browse the booklist and redeem your discount online when you enter Y1644 at the checkout. #IMC2016 @yalebooks 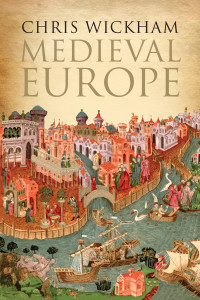 In the 1020s, Hugh, lord of Lusignan in western France, had a long memorial written, which listed all the injustices done to him by his (senior lord), William V, count of Poitou and duke of Aquitaine. William promised him wives which he then did not allow him to marry; he did not let Hugh inherit lands he was entitled to; he acted without Hugh’s advice; he did not help Hugh when others sought to take his lands (Hugh said to William ‘I never lose except because of my fidelity to you’; William was unsympathetic: ‘You are mine to do my will’); he did not stop castles being built to Hugh’s detriment; he had Hugh’s new castles burnt down. Hugh complained at every stage, and William promised his support at every stage, but never kept his promises. In the end Hugh ‘defied the count, in the hearing of all, except for his city and his own person’, and they fought a small war; only then did the count- duke agree to come to terms and give Hugh part of his withheld inheritance, in return for very solemn oaths, and Hugh’s oath of fidelity. We do not know how long it lasted, but at least Hugh was reassured enough to have his plangent text stop there.¹

Hugh poses himself as a victim in this memorial, but in reality was far from that; he was one of William’s most powerful and potentially dangerous aristocratic dependants, and there will have been another side to this story. But it is striking how far his whole text revolves around a personal bond, posed as one of trust and betrayal. It indeed resembles French verse epics of the twelfth century, such as that of the emblematically bad lord Raoul de Cambrai, who burned down a nunnery with his faithful vassal Bernier’s mother in it, and then in the end hit Bernier with a spear- shaft, before Bernier could bear formally to break his bond of fidelity.² This was, then, a political structure dependent on personal relationships. It was also a very localised one, all taking place in Poitou, with other counts (such as the count of Anjou, 100km to the north) mentioned almost as foreign powers. William was in fact one of the most successful regional rulers of early-eleventh- century France, as Hugh’s memorial reluctantly testifies; but his territory was a network of the castles of others, even if he was active enough in trying to bring as many of them as possible under his control. And, although he claimed full power over his aristocratic dependants, when he did make peace with them he had to make promises back to them as well. Personal relationships of this kind had old roots, but they had never before characterised the whole of politics.³ Whatever this world was, it was not the world of Charlemagne or Otto I.

‘A New Look at Ray K. Metzker’: A Guest Blog from the Getty Center

Ray K. Metzker is one of the most innovative photographers of the last half century, though he is…