‘Erika’s great skill was to turn the paintings … into companions.’
– Michael Palin

Michael Palin ‘makes no apologies’ about his enthusiasm for the National Gallery London and its superb collection of art works – paintings he first encountered when he arrived in London during the 1960s. In this piece, taken from his speech at an event to celebrate the life and work of Erika Langmuir (1931-2015), author of The National Gallery Companion Guide, Michael Palin explores his special relationship with the Gallery, as well as telling us where to look for the inspiration behind that famous Monty Python title sequence ‘foot’. 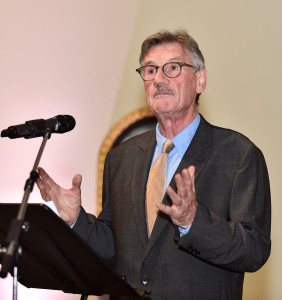 For me Erika Langmuir’s Companion Guide to the National Gallery touched a spot that very few guides ever have. Once I’d bought it, I’d carry it with me every time I went to the gallery – I had to have my pockets widened just to accommodate it, but it was worth it!

The great virtue of a guide is that it must complement, not replace the object of its attentions. That’s why Venice by Jan Morris, whilst not a conventional travel guide is a perfect example of making you want to go and see something, and then relishing it all the more because of what you’ve read. This is why I was so enthusiastic about Erika’s guide. In fact I was over-enthusiastic. My wife and I knew Erika and Charles well, both socially and from my work with Charles as an actor, but whenever we were together, certainly from 1994 onwards, I would talk of only one thing – the pleasures that Erika’s Guide to the National Gallery gave me and continued to give me. Erika took it well, but I think I must have strained her stock of polite smiles!

I make no apologies for my enthusiasm. The National Gallery is a magnificent collection but a daunting prospect for someone with only an hour or two to spare. When I first became acquainted with the Gallery on my arrival in London in the mid 1960’s, I found it impressive, soberingly grand and quite overwhelming. Where should I start? Where should I stop? When should I call it a day? In short, I needed guidance. At that time, as I remember, the guides available were more concerned with layout than content. You could find the toilets more easily than you could find the Tintorettos. Certainly there was nothing to reflect the vitality of the experience of looking at paintings. The names and labels were correctly spelt, but there was little sense of the transformative power of the works themselves. So when Erika’s Companion Guide came out in the mid 1990s it was for me, almost literally, a case of light shining in the darkness.

The paintings themselves benefited from the latest advances in reproduction and for the first time they were as dazzling on the page as they were on the walls. The design and layout of the Guide was clear and clean, avoiding the temptation to squeeze too many of the paintings in and opting occasionally for striking full-page plates. And there was Erika’s text. Remarkable first of all for her selection of paintings right across the historical periods, which you knew was a necessary limitation but equally you knew you were not missing out, with every period given fair weight. She described the works she’d chosen in an informative, authoritative and yet always accessible way. She rose to the paintings and they rose to her.

One of the unexpected pleasures of Erika’s Guide was that it led me sometimes away from the mainstream to discover such gems as Geertgen tot Sint Jans’ delicately appealing Nativity at Night. She explained it, but then she left you to do the rest. Similarly she introduced me to Moroni’s The Tailor, one of the most considered, thoughtful and skilful of portraits, and Gainsborough’s Mr & Mrs Andrews which Erika called “the most tartly lyrical picture in the history of art”. Erika was never one to hold back – she billed Bronzino’s Allegory with Venus and Cupid the most “frantically erotic painting” in the collection, a strapline that many a Hollywood producer would die for. Erika was amused that I was already familiar with a bit of this painting, as Cupid’s right foot is the foot that Terry Gilliam chose to come down through the television in the Monty Python title sequence.

Never was a Companion Guide better named, for Erika’s great skill was to turn the paintings themselves into companions. Companions to whom Erika introduced you and then left you to get to know them better, not just in the gallery, but at home over a cup of coffee or a glass of wine. Her Guide transformed my experience of our greatest British art gallery and it stimulated an interest in the history and appreciation of art which was half-formed at the time, but which has now become one of the chief pleasures of my life. The latest, revised and expanded edition is quite stunning and I’m so glad that it still bears Erika’s name and her trademark of great knowledge, generously but never prescriptively imparted.

I remember Erika as a wonderful cook; she prepared us some marvellous meals, usually with the cats in close attendance, sometimes they were even sitting in the bread basket. She chose the ingredients carefully, so that each one mattered and each one’s part in the finished product was distinct in itself and a vital part of the dish as a whole.

I think that’s not a bad description of the legacy that her ground-breaking Companion Guide left to the National Gallery, and to us all.

The latest edition of Erika Langmuir’s National Gallery Companion Guide is now published and available in bookshops, including the National Gallery’s shops and from Yale University Press. 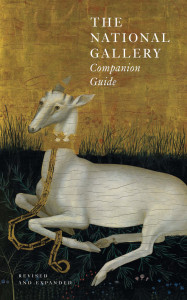 To mark the publication of Stephen D. King’s Grave New World: The End of Globalization, The Return of…