by Gregory Woods, author of Homintern —

There is a tendency to think the culture and politics of homosexuality belong, and should belong, to separate spheres of activity. The one, the cultural, is thought of as being mainly concerned with the psychology of the individual (Proust, Hall) and with the glamour and games of High Camp (Diaghilev, Firbank). The other, the political, is separate for reasons implicit in that categorization of the first: for it must act both collectively and seriously. This view presupposes only a politics of grim solemnity, and a cultural life only of facile levity, with nothing in between.

To some observers it seems impossible to reconcile The Soul of Man Under Socialism with The Importance of Being Earnest. Yet Oscar Wilde’s comedies would be widely performed in the USSR as satires on the British social system—as well they might be. In their slick undermining of conventional morality and their portrayal of an apparently stable society always teetering on the edge of scandal, they are politically radical—if played that way. We see something similar in the context of feminist literary history: the innovations of To the Lighthouse are inseparable from those of A Room of One’s Own.

The fact is that the politics of so-called private life—gender inequality, minority sexualities, gender dysphoria—were often worked out in the more public arena of the arts. The personal was political, as were the arts of the personal. So, for instance, Radclyffe Hall took herself seriously, perhaps all too seriously, as both an artist and an agent for social change. This is self-evident in the yoked aesthetics and politics of The Well of Loneliness (1928). Even as apparently frivolous a novelist as Ronald Firbank has much to teach us in his non serviam approach to the seriousness of the social and aesthetic mainstream. For a start, the camp sensibility runs rings around the posturing self-regard of masculinist politics and poetics.

The early sexologists understood the necessity for cultural underpinning of their work on the theorization of sexual types. As well as being a sexologist, Karl Heinrich Ulrichs drafted a list of bylaws for urnings, including in its aims “to found an Urning literature”. He planned to publish Sacred Grove, an anthology of Greek and Latin classics of homosexual love, along with some of his own poetry. Educating each other about their heritage—whether in some sense actual or retrospectively constructed—was a major part of the early politics of “homosexuality”, contemporaneous with its initial theorization as a distinct identity. The English socialist and sexual theorist Edward Carpenter not only produced Towards Democracy (1883-1922) a large volume of political verse modeled on Whitman’s Leaves of Grass, but also edited Ioläus (1902), an “Anthology of Friendship” gathering texts on male-male love from around the world and throughout history.

Lists of famous names did not emanate from some airy condition of celebophilia. They identified a history of same-sex love from which to draw strength for the coming struggle: a past for the future, as it were. This has been happening for a long time. In Christopher Marlowe’s Edward II, the senior Mortimer compares Edward’s love for Gaveston with Alexander’s for Hephaestion, Heracles’ for Hylas, Patroclus’ for Achilles, Tully’s for Octavius and Socrates’ for Alcibiades. The poem Don Leon, unconvincingly attributed to Lord Byron (it probably dates from the 1830s, after his death), cites Plato, Socrates, Bion, Plutarch, Virgil, and Horace. Oscar Wilde’s short story “The Portrait of Mr W.H.” is, in part, an animated bibliography of gay literature; and his famous trial speech idealising “the love that dare not speak its name” invoked David and Jonathan, Plato, Michelangelo, and Shakespeare. These were the valued names that, if any could, might distract a jury from the more pertinent narrative of working-class rent-boys. As it happened, their value proved insufficient to the occasion. In Homogenic Love (1894), Edward Carpenter named Michelangelo, Shakespeare, Winckelmann, Tennyson, and Whitman. The ideal was to grab as much cultural capital as you could while subverting the very system that granted the capital its value. (This is otherwise called having your cake and eating it.)

Far from being a concern merely of genteel, quietist queens of a lapsed social world, the reclaiming of a cultural past was an urgent concern of the new wave of gay liberationists in the 1970s. In Britain, the activist theatre company Gay Sweatshop included in its agitprop repertoire several plays whose purpose was to convey a sense of the importance of a collective cultural history. As Time Goes By (1977) by Noël Greig and Drew Griffiths was about the life and work of Edward Carpenter. The three acts of Greig’s The Dear Love of Comrades (1979) shifted from Victorian Britain, through Nazi Germany, to the Stonewall Riots in New York, thereby linking the Wilde trials, the revoked freedoms of the Weimar Republic, and the outbreak of the gay liberation movement. Martin Sherman’s Bent (1979) was about gay men in the Weimar Republic and the subsequent Holocaust. The liberationist generation’s discovery of the gay holocaust would prove timely when the AIDS epidemic began, accounting for the frequency of genocidal tropes in the rhetoric of the struggle for proper research and treatment.

Any decent bibliography of twentieth-century gay literature will include such major, politically committed writers of the Left as Federico García Lorca in Spain, Yannis Ritsos in Greece and Pier Paolo Pasolini in Italy. For me, as a gay poet, these are peerless influences. Indeed, with them in mind, I’d go as far as to say, I can’t think of LGBT culture and politics as being separable. There has been no time limit on the politically practical need to consolidate our sense of a shared cultural heritage.

Gregory Woods was appointed to Britain’s first chair in Gay and Lesbian Studies by Nottingham Trent University in 1998. He is the author of Homintern: How Gay Culture Liberated the Modern World.

HOW GAY CULTURE LIBERATED THE MODERN WORLD: EXPLORE THE TIMELINE 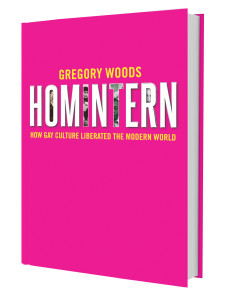 Our Bookshop of the Month for March is Southampton’s October Books. Following an extremely well-publicised move, this friendly, not-for-profit…