‘Writing in 1965-6, Pevsner caught both the success of the burgeoning Shakespeare industry and the tension with the conservation of a historic market town…’

For this Shakespeare400 year, archivist and Historian Chris Pickford returns to his roots on a trip to literary destination and market town Stratford-upon-Avon in Warwickshire, just one of the highlights in his newly revised architectural guide to Warwickshire, in the Pevsner Buildings of England series.

Chris Pickford writes –
William Shakespeare (1564-1616) and I have something in common. We were both born in Stratford-upon-Avon. While my birthplace (the local maternity hospital) has been unceremoniously bulldozed, his has become a place of international pilgrimage and veneration. In this year marking the 400th anniversary of his death Shakespeare and his works have had yet more television coverage than usual. So far as I know, my only television appearance was in 1964 when my mother and I were caught fleetingly on screen as we cycled across the Clopton Bridge on our way into Stratford for the 400th anniversary celebrations of Shakespeare’s birth. 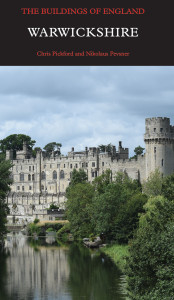 Mother had little time for the ‘blasted Bard’ and I grew up in a household resentful of the impact of Shakespearean tourism on our local market town. The feeling was not uncommon among local people back then, and I can remember being surprised that she was willing to come to Stratford with me to see the anniversary parade in 1964. Mother was forthright and highly articulate. Quite what she would have said of the further changes to the town since she left the area in 1981 I can’t quite imagine!

Writing in 1965-6, Pevsner caught both the success of the burgeoning Shakespeare industry and the tension with the conservation of a historic market town almost perfectly. In the revised edition, his brilliant introduction stands unaltered except for a couple of minor factual adjustments. The key sentences are these:

‘The houses you are shown are the birthplace, … the New Place Museum, … Hall’s Croft, … and the cottage at Shottery of the Hathaway family. The architectural value of these houses is minor; so is the biographical value. But for mass enjoyment they are first-class, and they are for that purpose extremely well managed, with their pretty gardens. Once Shakespeare is out of the way and once you can see Stratford out of season, you can still visualize the thriving Midland market town with the comfortable, staid, minor Georgian town superimposed on it.’

In a sense, Pevsner was right. The buildings aren’t of any huge architectural significance. However, research and investigations since 1966 have uncovered significant facts that needed to be worked into the descriptions for the revised edition. Of course, the coverage of these things in the book has to be extremely brief – but anyone making a comparison between the two editions will see the difference.

Big advances in the understanding of vernacular architecture generally – aided by the application of dendro-dating – have led to quite extensive reinterpretation of Anne Hathaway’s Cottage, Hall’s Croft and the Birthplace itself. The street end of Anne Hathaway’s cottage turns out to be a three-bay cruck house of c.1462-3, the added wing in the garden dating from c.1600. Part of Hall’s Croft is dendro-dated to 1612-3 but it remains a complex building. The Bard’s birthplace has been subjected to fresh studies too but without any striking discoveries in terms of dates.

History has certainly been re-written at the other major Shakespeare property, Mary Arden’s Farm in nearby Wilmcote. Careful documentary studies by Nat Alcock and Bob Meeson confirmed what had long been suspected, i.e. that the pretty timber-framed house traditionally associated with the Arden family was actually the Palmer homestead while the Ardens lived next-door at Glebe Farm. The whole site has been re-interpreted and the buildings are now reliably dated, with Palmer’s Farm (formerly known as Mary Arden’s House) having three phases of construction between c.1569 and c.1581.

The Shakespeare Centre in Henley Street (Laurence Williams, 1963-4) had just been built when the first edition appeared. Pevsner thought it handsome and highly praiseworthy. It was built through the endeavours of Dr. Levi Fox, Director of the Birthplace Trust from 1945 to 1989. Fox commissioned a number of Shakespearean artworks and one big change in the town is in the number of public sculptures erected during the past fifty years. The best of these are briefly listed in the revised edition of course, including the series of statues by Greg Wyatt 1999-2008 in the garden of New Place and J.W. Butler’s “Stratford Jester” (1994) in Henley Street. Locating and recording these was made relatively easy by the thorough coverage in George T. Noszlopy’s Warwickshire volume of the Public Sculpture of Britain series (2003).

And then there’s the Royal Shakespeare Theatre. In Pevsner’s time it consisted of parts of Dodgson & Unsworth’s Burgesian Gothic building of 1879-81 alongside Elizabeth Scott’s “Jam Factory” (as it was irreverently known locally) which replaced it after the 1926 fire. The major re-working by Bennetts Associates in 2005-11 is undoubtedly a compromise – the whole building a hotch-potch – rather awkwardly preserving the essential elements of the past while striving to create a performance venue for the present and future.

Of particular interest, though, are the changes to the town undertaken to reinforce the image of Tudor Stratford. This quiet revolution long pre-dated my mother’s time and her distaste for all things Shakespearean. Researches by Robert Bearman (formerly archivist to the Shakespeare Birthplace Trust) have shown how Stratford’s historic spine underwent a transformation in the early C20, partly as a result of campaigning by the novelist Marie Corelli who settled in the town in 1899. What is now black and white was previously gentle Georgian, yet in many cases the restorers were merely returning the fronts to how they had looked in earlier times. Of the entirely new buildings in a Tudor style, W.H. Smith’s and the Costa café are especially memorable.

Stratford has been written about as much as almost any place in England. One might think that there would be nothing new to say. Far from it. Revision has provided the opportunity to update and improve on Pevsner’s original in many ways as indicated here. And yes, I cannot forbear from remarking that the town has lost some of its charm since I was a local lad. But hang on, doesn’t the use of the word forbear have a Shakespearean ring about it? Indeed, it’s on the stone shielding the poet’s grave:

‘Good frend for Jesus sake forbeare, to dig the dust enclosed heare. Blest be the man that spares these stones, and curst be he that moves my bones.’

Maybe something of the poet’s influence has rubbed off on me, despite my mother’s best endeavours! Of his influence on the appearance of the town there can be absolutely no doubt. 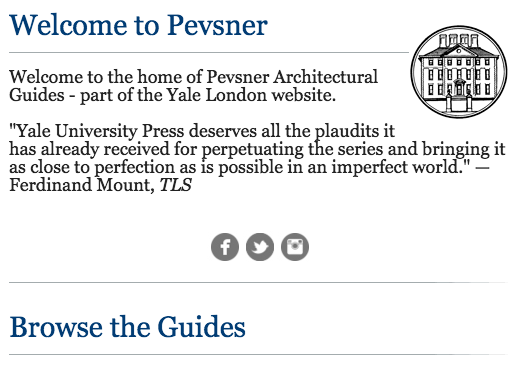 Jo Handelsman, Kayla Cohen, Garth Harmsworth and Shaun Awatere tell us about the importance of soil and why…