The Narrow Edge: A Tiny Bird, an Ancient Crab, and an Epic Journey follows the extraordinary migration of red knots (tiny sandpipers weighing no more than a coffee cup), from the tip of South America to the northern arctic tundra. Author Deborah Cramer explores how the lives of humans, red knots and horseshoe crabs are intertwined, and makes an eloquent plea to protect the vital strand where land meets sea. We have selected an extract from this fascinating and thoroughly researched study, in which Deborah Cramer describes the feeding habits of the red knot.

‘Bay of Plenty’ from The Narrow Edge: A Tiny Bird, an Ancient Crab, and an Epic Journey

The boat scrapes against the beach. Masses of spawning horseshoe crabs pile up along the waterline. Thick crowds of shorebirds scurry along the sand, grabbing loose crab eggs. The day is overcast and rainy. Neither man nor bird nor crab seems to care. The men unload beach chairs and spotting scopes: Nigel Clark from the British Trust for Ornithology, who after so many springs on this bay now considers Delaware a second home; Richard du Feu, network engineer from the University of Lancaster, who comes from the freshwater of England’s Lake District; and Bram Verheijen, a researcher from the Netherlands. We set up the chairs, adjust the scopes, and begin searching for flagged birds. There are plenty. In Bahía Lomas or San Antonio Oeste, shorebirds would have abruptly taken flight if we’d arrived this noisily. Here, the beach seethes with birds. Intent on eating, they rush across the sand, oblivious to us.

Horseshoe crabs plow through the wet sand like armored tanks. It’s hardly an orderly invasion. Desperate to spawn, they clamber over each other, climb my Wellies, and wedge themselves beneath my tripod, their barnacle-laden shells clicking against each other. Some are the size of dinner plates. Bahía Lomas was empty, quiet, and peaceful. Here, the birds are making a din. The congestion is like Grand Central Terminal at rush hour. A peregrine swoops. En masse the birds rise. The raptor dives at a knot. The knot panics, flying into du Feu’s scope. The peregrine leaves; the flock resettles.

We’re on Back Beach, a thin spit of sand in Mispillion Harbor, Delaware. Shorebirds, exhausted and famished after the long flight from South America, arrive in Delaware Bay, one of the nation’s largest and least-known estuaries. Ignored by millions of people flocking to Delaware’s ocean beaches and the Jersey shore, Delaware Bay, poor sister to better-known Chesapeake Bay, has long held one of the country’s best-kept secrets. For a few weeks every year, as human crowds head to the sea, this bay’s beaches are awash in swarming horseshoe crabs and ravenous shorebirds—the world’s largest concentration of spawning horseshoe crabs and the largest and most important stopover for shorebirds on the eastern seaboard of the United States. For years, so it seemed, only the locals knew.

For most of the year, the large, ungainly, fossil-like crabs live offshore in the deeper waters of the continental shelf, but each spring, on the rising tides of May’s new and full moons, they come ashore. In exquisite and mysterious synchrony, birds and crabs arrive together: crabs to spawn, birds to feast on horseshoe crab eggs. Timing is key. To reach their Arctic nesting grounds and successfully breed, knots double their weight during their two-week stay here. Easily digested horseshoe crab eggs offer fast, energyrich food to fuel this leg of their journey. In 1986, ornithologist J. P. Myers described the sight as “sex and gluttony on Delaware Bay.” The description fits. Horseshoe crabs, eggs, and shorebirds blanket Back Beach, packed in so tightly the seething mass conceals the sand. The wide reach of Bahía Lomas and the San Antonio port beaches call for a patient, painstakingly slow approach to birds. Here we simply wait as thousands race helter-skelter across the sand, flags coming into view and then vanishing, a sea of knot legs suddenly obscured by smaller, semipalmated sandpipers. The researchers jot down flag numbers, rapidly filling waterproof notebooks. In

England’s Wash estuary, du Feu scans for knots in distant mudflats. Here he vacations, simply sitting amid the commotion, where we don’t even need binoculars to take in the fine breeding plumage of dunlin, each with a striking black patch on its belly, or the distinctive feeding style of dowitchers, whose beaks work the sand like sewing machine needles moving along a piece of fabric—all only a few feet away.

The Narrow Edge: A Tiny Bird, an Ancient Crab, and an Epic Journey by Deborah Cramer is available from Yale University Press. 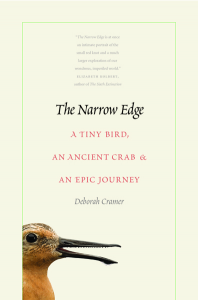 Decarbonisation and the fossil fuels – what happens next? by Dieter Helm, Part 3 of 3

Dieter Helm, author of Burn Out, asks whether oil, gas and coal company executives should be quaking in their…