Aubrey Beardsley (1872-1898) and his sister Mabel (1871-1916) were close as children, a relationship that lasted until he died. Most likely, their connection initially formed when their mother, Ellen, was forced by family circumstances to work. While she went to various people’s homes to give piano lessons, the sister and brother, only a year apart in age, were in each other’s company daily. At the age of seven Aubrey had his first tubercular haemorrhage and was sent to the more salubrious climate of Hurstpierpoint, where he attended four terms at Hamilton Lodge school. Of his fourteen letters home between Christmas 1879 and October 1880, a dozen inquired about Mabel or sent his love, and two were written directly to his sister, relating things he did at Hamilton Lodge. Reunited at home, the children’s activities together resumed. Aubrey drew the two of them boating, wading in a creek and walking in a park—his sister proportionally taller and proprietarily holding his hand. At home they would create that staple of Victorian children, a puppet theatre, and act in plays, songs and charades for which Aubrey drew playbills. It is no surprise, then, as evidenced by his letters, that Aubrey grew up regarding Mabel as his closest friend and intellectual equal and that his view of women was largely formed by the time they spent together as youngsters. Beardsley replays their relationship and his own feminist attitude in his drawings of women.

‘[His] depictions of women clearly reveal Beardsley’s sympathy for women who decided to cut through the net of social mores that restricted them.’

The women’s movement was escalating during the 1890s. After Florence Nightingale returned from the Crimea in 1856, middle-class women began demanding the right to take a university education and earn a degree, to learn a profession, make a salary and be acknowledged as intellectually capable—in other words, to be equal to men. When Beardsley began his career in London in 1892, these issues were being vigorously debated in popular journals and newspapers. Although the right to vote on the same terms as men would not be won until 1928, by the 1890s women had begun to go to bookstores alone and eat in restaurants with female friends, gain more than a primary school education, and control their own money. Moreover, the custom of a married woman chaperoning a young woman when a young man visited faded (A Nocturne of Chopin, intended for The Yellow Book; A Repetition of ‘Tristan und Isolde’, for The Savoy), although, according to debates in magazines, most young women still did not possess latchkeys to their homes, and when they walked out with a man, a sibling or a servant accompanied them.

Beardsley’s drawings of women show them breaking the rules of decorum in painting and illustration that had been set by academic painters before Victoria became Queen and during her reign by the Pre-Raphaelite painters. Instead of combing abundant hair, idly gazing into a mirror, holding a book with its spine directed towards genitalia or standing naked, bodies on view, Beardsley’s women take tea or coffee with a friend in a restaurant (Black Coffee), read books whose spines do not direct the eye to genitalia (Le Morte D’Arthur, Book XVIII, chapter xiv; poster for Children’s Books; front wrapper, Leonard Smithers’s Catalogue of Rare Books, No. 6), play a musical instrument other than (the prescribed) piano (Le Morte D’Arthur, Book I, chapter xxvii, Book IV, chapter xix); walk alone or with a female friend at night (A Night Piece; Les Passades), become highly regarded actresses (Madame Rejane; Mrs Patrick Campbell; Miss Winifred Emery); attend theatre with a young man without a chaperone (Evelina at the Theatre) or with a clearly subordinate male following her (Lady Gold’s Escort). Moreover, most drawings of his women for Le Morte D’Arthur, 103 of 358 for the book, are alone and shown while reading a book or a scroll, advancing on a path, tending bushes, carrying flowers, meditating, praying, officiating in prayer or directly gazing at the viewer. None of them drift along with a vacant expression or suggest subordination to another person. In these ways the young artist countered typical views of women in book illustrations and paintings. Although for a time they became collectively and popularly, if somewhat derogatorily, known as The Beardsley Woman, Beardsley reveals each one to be an independent, free to choose activities and pursue them as she decides.

Beardsley’s view of education for women is equally well defined. By herself, The Beardsley Woman walks briskly to bookstores (poster for The Pseudonym and Autonym Libraries). More than a few women prepare to choose or have already selected books (front cover design for The Yellow Book, Vol. 2; front cover design intended for The Yellow Book; prospectus for The Savoy Magazine). Others grasp the chosen book, boldly taking the formerly forbidden fruit of male composition and study (poster for Children’s Books; Bookplate of the Artist (Mr. Pollitt’s Bookplate)). Beardsley thus emphasizes the value of books as he supports educating women. Going as far as he could to contradict the standard picture of young unmarried women without having his drawings refused for publication by middle-class magazines, the artist portrays women like his sister Mabel, leading her life without a father or a husband dictating where she will go, with whom and at what time, or the content of her books.

Another way Beardsley diverges from his English contemporaries is his rendering of sexuality. When she is nude, The Beardsley Woman, young or old, stands tall and dignified (Le Morte D’Arthur, Book I, chapter xi; Bookplate of the Artist (Mr. Pollitt’s Bookplate); Lysistrata Haranguing the Athenian Women, for Lysistrata). He overtly hints at sexual liaisons between women and men (front cover for The Yellow Book, Vol. I) as well as acts of sadism and masochism (Juvenal scourging a Woman; Earl Lavender). Intimations of women masturbating appear in major texts (border for the List of Pictures for Salome; Salome on Settle, or Maîtresse d’Orchestre; poster for The Spinster’s Scrip; Lysistrata Shielding her Coynte and The Athenian Women in Distress, for Lysistrata). And perhaps ignored or missed are his suggestions of sexual encounters between women (title page for The Yellow Book Vol. I; poster for The Spinster’s Scrip; Choosing the New Hat for The Savoy, No. 2). These depictions of women clearly reveal Beardsley’s sympathy for women who decided to cut through the net of social mores that restricted them.

To read his letters is to relive his dependence upon hearing Mabel’s views of his ideas and their close friendship, a bond that extended throughout his life. Offered a place at Cambridge, for financial reasons Mabel was forced to refuse. Instead, she began teaching, and her income enabled the family to live in better circumstances in London. When an aunt died, with her bequest Mabel and Aubrey leased a house together. She ultimately became an actress. Successful in playing roles in plays for companies that toured England and other countries, she likely satisfied an urge to travel independently. Nevertheless, Mabel was with Aubrey when he died in Dieppe, on 16 March 1898, predeceasing her by eighteen years. 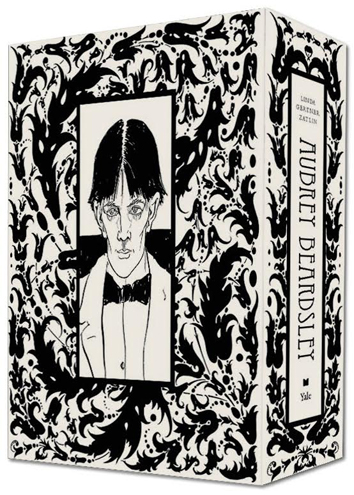