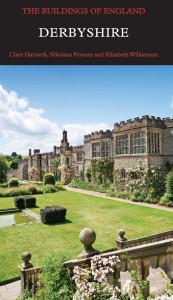 The wonderful houses, churches and stately homes of Derbyshire are well known, but there are plenty of surprising and interesting places and details to be found in the byways of a county renowned for its contrasts. Clare Hartwell, author of the newly revised Pevsner guide to Derbyshire, takes us on a tour of the sights!

Derbyshire has three cave chapels, all probably with medieval origins. The Cratcliff hermitage near Youlgreave is not easy to find – the trick is to head for the yews as you scramble up the rocks. Traditionally found in sacred places, the trees shelter a shallow cave, where a Crucifix is carved in the rock face. The cave-chapel near Dale Abbey is hollowed out of the soft rocks beside a woodland path. It was the retreat of a baker from Derby, who was directed to the place by a vision, according to13th century records. Anchor Church is the largest, a set of chambers in a low cliff beside the river near Foremark, but its origins are obscure.

Traffic lights as you have never seen them before

One of the quirky and unexpected sights of the Peak District is at Hathersage, where three sets of working traffic lights stand in a woodland clearing beside the Mellor cutlery factory – an unusual circular building which is a sight to behold in itself. They are to David Mellor’s original 1960s design. It is a surreal experience standing amongst the trees as the lights endlessly change, slightly out of sync, without any traffic in sight. 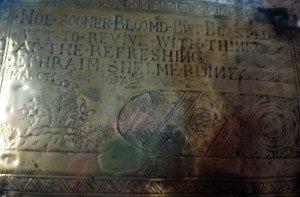 Of the hundreds of tombs and memorials in the county, one that always brings a tear to the eye is in Crich church. A brass to little Ephraim Shelmerdine, born and died in March 1637, shows a tiny baby in lovingly patterned swaddling bands, with an epitaph which starts ‘Noe sooner Bloomd but Blasted’.

Mary Lowndes was one of the most significant pioneers in Arts and Crafts stained glass, and the first woman to set up her own studio and workshop. She was involved in the fight for women’s rights as the chair of the Artists’ Suffrage League and designer of banners and posters for the movement. An example of her work can be seen in a little glowing window, with her signature, at Scarcliffe church. 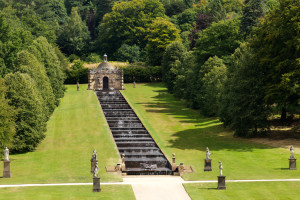 Sounds and sights at Chatsworth – secrets of the cascade

The Chatsworth cascade is in the form of a staircase, the only one of the type in the country, made by French designers. It was crafted with steps of varying heights, spacing and profiles, so that the way the water appears as it flows over the stair changes, making different rushing and tinkling sounds as it comes down– a delight to the ear as well as the eye.

A locust in the High Peak 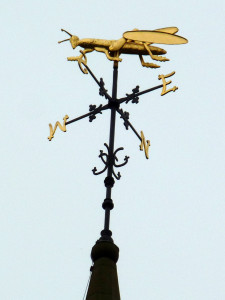 One of the surprising sights of the High Peak is the golden locust weathervane on top of the ancient church at Chelmorton, which stands 1200 feet above sea level. The dedication is to St John the Baptist, and the emblem refers to his diet of locusts and wild honey in the wilderness. Chelmorton has a remote atmosphere to this day and it is easy to imagine it might have seemed a wilderness six hundred years ago when the church was founded, though the locust is a more recent addition.

The carvings of mining gear on an unusual building in Wirksworth is a clue to its purpose. A special court has been held in Wirksworth for centuries, to settle lead mining disputes. Nowadays it only meets once a year, in a court house which was rebuilt in the early 19th century. Wirksworth was a leading centre of the trade from before the Norman Conquest, and income from taxes and tithes on lead went to building the wonderful medieval church there. Trade slumped in the 16th century when lead from monastery roofs flooded the market after the Dissolution, but it soon picked up again, making Derbyshire the most important centre of lead production in Europe until the 18th century. 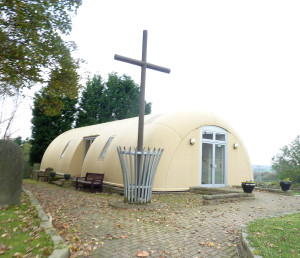 The most peculiar looking church…

When the church at Temple Normanton fell prey to subsidence, a lightweight alternative had to be found. The jaunty yellow fibreglass replacement of 1980s date stands amid all the Victorian gravestones, surely the strangest looking church in the county.

…and the church with the most peculiar name

Halter Devil Chapel is a tiny early 18th century building near Mugginton. A story tells of the night that Francis Brown drunkenly swore he would ride to Derby, even if he had to halter the Devil. As he fumbled for his horse in the dark, he laid hands on a creature with horns – it was as if the Devil had appeared, and in terror for his soul, Brown vowed to found and endow a chapel. Sceptics claim that his drunken encounter that night was probably with a cow, but the chapel was built and is still in use. 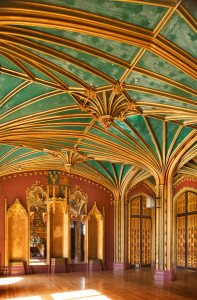 The Age of Chivalry revisited at Elvaston

Charles Stanhope, Viscount Petersham, later the 4th Earl of Harrington, was a ‘Regency buck’ and confidante of the Prince Regent, who designed his own clothes and outraged polite society with his affairs. He had to leave London after the scandal caused by his marriage to an actress. This allowed him to indulge a passion for romance and the golden age of chivalry, fitting out rooms at Elvaston Castle in fantasy Gothic style. The topiary gardens there, designed as bowers and the setting for bizarre garden pavilions (some of which survive), were created by the landscape gardener William Barron. They remain one of the best examples of gardens of the type.

A strange stone tower stands on a hill on the edge of Milford – and it has very unusual origins. The clue lies in the railway it overlooks, the North Midland line, surveyed by the railway pioneer George Stephenson. The tower is part of the original survey work of 1835-40, when it was used by engineers to take sightings to lay out the line.

The water cure in Matlock

Riber Castle stands on a hilltop above Matlock looking like a giant version of a child’s toy fort. It was the home of one of Derbyshire’s most eccentric entrepreneurs, John Smedley. He started his career in the family firm at nearby Lea Bridge, where John Smedley fine knitwear is still produced. He went on to build Smedley’s Hydro, now the County Council Offices in Matlock. Hydros offered water therapy, enormously popular with Victorian visitors, who flocked to Matlock to take the cure. Smedley made his fortune, and as distrustful of professional architects as he was of doctors, he designed Riber Castle himself. It has overlooked Matlock ever since it was put up in the 1860s. 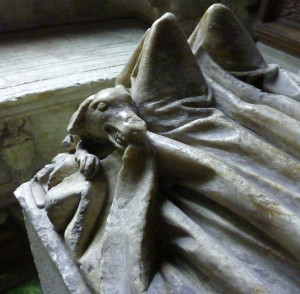 Derbyshire is famous for beautiful medieval tombs of alabaster, mined at Chellaston near Derby. The effigies are often shown lying on a chest, with their feet resting on dogs or lions. A charming touch can be seen at Radbourne and Kedleston churches, where little dogs at the feet of the ladies are playfully worrying their robes, as if to try to stir their mistresses from sleep.

Lost in the Peak District

The Pennines were traversed by pedlars and packhorses from early times, but treacherous weather and the bleak moorland landscape made trade routes dangerous and confusing. An Act of Parliament was passed towards the end of the 17th century for setting up guide posts (called stoops). They can still be seen in high moorland places, and at isolated crossroads, often with the destinations comically misspelled. Good examples can be found near Curbar Edge, at Longshaw Lodge near Hathersage and on Beeley Moor, pointing the way to the ‘Sheaffeild Roade’.

A new convenience at Haddon Hall

Haddon Hall is one of the best preserved medieval houses in England, with an evocative 14th century great hall open through two storeys up to the roof. Upstairs rooms on each side of the hall were reached from separate stairs at either end. After two hundred years of having to come downstairs from the chambers on one side, go across the hall and climb upstairs again to get to the other side, a short cut was built – the high-level passageway across one side of the hall which can still be seen by visitors today. 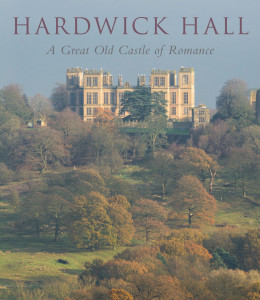 For our penultimate 2018 Bookshop of the Month, we travelled up to Wakefield to visit the Yorkshire Sculpture Park…