April 2016 marks the centenary of the Easter Rising, when a group of Irish nationalists staged a rebellion against the occupying British government in Ireland in an attempt to establish an Irish Republic. 24 April 1916 is still remembered as one of the most significant moments in Ireland’s tumultuous history, but does remembering the wrongs of the past always ensure future progress and protect us from repeating our mistakes?

‘What we know all too well is the damage collective memory can do.’ – David Rieff

Writer and policy analyst David Rieff argues that although we so often commemorate the past in the belief we can safeguard the future, there is also a case for forgetting. In the following extract from his new book In Praise of Forgetting: Historical Memory and its Ironies, Rieff poses the question: would it have been better for Ireland to forget the wrongs of the past?

In Praise of Forgetting  by David Rieff

Extract from Chapter Six: The Memory of Wounds and Other Safe Harbors

…The case of Northern Ireland stands out, since there, until the late 1990s, as one Ulster poet put it, the country got “martyrs when it needed men.” Those were the days when remembrance was hatred’s forge and forgiveness was not on offer. Is it not, then, at least worth considering, if only as a thought experiment, whether it might have been better for everyone in the six counties of Northern Ireland if they had found a way to forget the wrongs of the past, whether real or imagined, and whether accurately or inaccurately “remembered”?

Like any counterfactual, the question is one that can have no definitive answer. But what we know all too well is the damage collective memory can do. The Irish writer and politician Conor Cruise O’Brien once observed of a particularly dark and despair-inducing period of the conflict in Northern Ireland that during the secret negotiations in which, as a member of Garet Fitzgerald’s government in Dublin, he had been involved, just as it seemed as if Republicans and Unionists might finally, painstakingly be coming close to an agreement, a representative at the talks from one of the two sides would remember one of great militant songs—the IRA’s “Rising of the Moon” or the Ulster Volunteer Force’s “Sash My Father Wore”—and whatever hope had existed would soon vanish. Cruise O’Brien was much given to embellishment, but in this instance he didn’t need to. Those who may be tempted to doubt the potency of those songs might recall that “the rising of the moon” were the last five words of the final entry in the prison diary kept by the Provisional IRA leader Bobby Sands before he died on the sixty-sixth day of the hunger strike he had organized and led among  the Republican prisoners in the Long Kesh (Maze) prison in County Down, Northern Ireland, in 1981. “They won’t break me,” Sands had written of the prison authorities, “because the desire for freedom, and for the freedom of the Irish people, is in my heart. The day will dawn when all the people of Ireland will have the desire for freedom to show. It is then we’ll see the rising of the moon.”

There are also echoes in Sands’s diaries of The King’s Threshold, a play about a hunger striker set in the mythical past that Yeats had written in 1904, but which, as Sands surely knew, Yeats had rewritten in 1920 in the aftermath of the death on hunger strike of the imprisoned Sinn F.in lord mayor of Cork, Terence MacSwiney, himself a playwright. Sands’s act also seemed born of the same conviction that had led Patrick Pearse to confidently insist that even if the Easter Rising ended in failure, and he himself was killed by the British (he was), his and his comrades’ deaths would be a “blood sacrifice” that would stir the whole Irish people and lead to their rising up and finally seizing their independence. Of Sands’s hunger strike and eventual death, Seamus Heaney, Ireland’s greatest poet since Yeats, himself originally from County Derry in Northern Ireland, subsequently wrote: “I was highly aware of the propaganda aspect of the hunger strike and cautious about being enlisted. There was realpolitik at work; but at the same time, you knew you were witnessing something like a sacred drama.”

As Heaney knew well, sacred drama is the antithesis of any decent politics. For once the sacred has been invoked, there can be no compromise with one’s adversaries, only their unconditional surrender. To the extent that this can still be called politics, it is a politics of totalitarianism. Yeats might write in his poem “September 1913,” “Romantic Ireland’s dead and gone; it’s with O’Leary in the grave,” but, in reality, as Yeats would  realize in the aftermath of the Easter Rising and sum up in another poem, “Easter, 1916,” with the words “a terrible beauty is born,” romantic Ireland survived the Fenian John O’Leary, financial officer of the Irish Republican Brotherhood and editor of The Irish People, as it would survive Pearse and Easter Sunday, 1916, and MacSwiney, and Sands too. It was only the deed of the very different Easter Sunday, in 1998, that finally put romantic Ireland in its grave. That Ireland had lived and battled in poetry, whereas whatever else has gone wrong in the Ireland of the twenty-first century, the continuation of peace in the North amply demonstrates the truth of a former governor of New York State, Mario Cuomo, who said that one campaigns in poetry but governs in prose.

Poetry, which is among other things the native language of myth, facilitates long memories, while prose, at least in the Cuomo sense, helps shorten them. For as John Kenneth Galbraith admonished us, and as anyone with direct experience of practical politics knows, “Nothing is so admirable in politics as a short memory.” Of course, myths, like the proverbial wires, can become crossed, allowing the legends of the distant past and the ideological needs of the present to blur into each other. Take as an example “The Dying Cúchulainn,” the statue of the hero of the Irish medieval epic the Táin Bó Cúailnge, which stands inside the General Post Office in Dublin. The statue was made in 1911 by the Irish sculptor Oliver Sheppard, a leading figure in the Celtic Revival and an ardent nationalist. But it is there not as a tribute to ancient Ireland; it was installed in 1935 at Éamon de Valera’s personal request as a memorial to the Easter Rising. Samuel Beckett treats these contradictions venomously in his novel Murphy, published only three years later, in which the character Neary says that he wanted to “engage with the arse of the statue of Cúchulainn, the ancient Irish  hero, patron saint of pure ignorance and crass violence,” by banging his head against it.

David Rieff is the author of many books, including Slaughterhouse: Bosnia and the Failure of the West, A Bed for the Night: Humanitarianism in Crisis, and, most recently, The Reproach of Hunger: Food, Justice, and Money in the 21st Century. 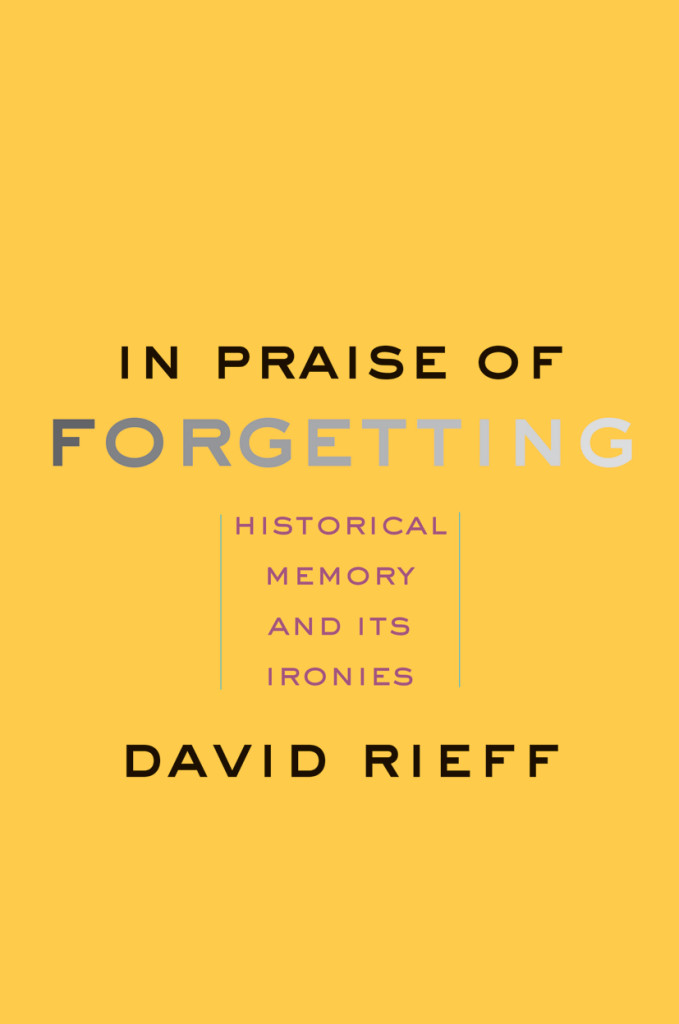 Images have been source from Wikimedia Commons here and here.

In the second in our three-part series Countdown to Global War, Evan Mawdsley, author of December 1941 discusses…