‘A misfit and maverick, a romantic and orientalist, an archaeologist and wartime intelligence officer, he was perhaps a most unlikely man of action.’

Dr. Neil Faulkner, author of new publication Lawrence of Arabia’s War, has spent the last decade excavating sites associated with the 1916-18 Arab Revolt in the Arabian desert with a team of archaeologists. Recently, the Guardian has reported on his team’s discovery of a single bullet believed to be from the colt pistol carried by Lawrence himself. Remarking on this landmark find, Faulkner comments: ‘Lawrence has something of a reputation as a teller of tall tales but this bullet – and the other archaeological evidence we unearthed during 10 years of fieldwork – indicates how reliable his account of the Arab revolt in his Seven Pillars of Wisdom is.’

In this article introducing his new book, Neil Faulkner explores the legend that is Lawrence of Arabia, casting light on Western imperial ambition and the Middle East, both in Lawrence’s time – and beyond.

An Introduction by Neil Faulkner

The Middle East is on fire. It is the epicentre of a vortex of violence extending from Central Asia to West Africa. Western military intervention has torn apart the region’s fragile social fabric. A million or more are dead. Tens of millions have been displaced, tens of millions more impoverished and imperilled.

The mayhem has spawned a generation of Islamic-fascist warlords and sectarian militias. The most potent of these, Islamic State, has embedded itself in a wide swathe of territory straddling the former Syria-Iraq border. Its domain has erased the line in the sand drawn by British and French imperialists a century ago. The aim of this 21st century ‘caliphate’, we are told, is the reversal of the Sykes-Picot Agreement.

David Fromkin called the reordering of the Middle East between 1916 and 1921 ‘a peace to end all peace’. So it was.

The British played the most invidious role. They induced the Emir of Mecca to launch the Arab Revolt with the promise of an independent state spanning the region at the end of the war. At the same time, they made a secret pact with their French and Russian allies to dismember the Ottoman Empire and portion it out among themselves. And soon after, they struck a deal with the Zionist movement, committing Britain to the creation of a Jewish ‘homeland’ in Palestine, in anticipation that this would provide a bulwark of British imperial rule.

T. E. Lawrence experienced Britain’s crooked diplomacy as inner crisis. A misfit and maverick, a romantic and orientalist, an archaeologist and wartime intelligence officer, he was perhaps a most unlikely man of action. Indeed, his detractors have claimed that his reincarnation as dashing desert-war commander was largely invention; that he was, in fact, a liar, charlatan, and self-promoting imposter.

The evidence on the ground does not support them. Archaeology has given incontrovertible testimony to the intensity of the Bedouin tribal insurgency and the accuracy of Seven Pillars of Wisdom as a memoir of the conflict.

‘Archaeology has given incontrovertible testimony to the intensity of the Bedouin tribal insurgency and the accuracy of Seven Pillars of Wisdom as a memoir of the conflict.’

Lawrence seems to have been the catalyst of a guerrilla war which eventually raged along the entire 800-mile length of the Hijaz Railway between Damascus and Medina. And it was because he was so instrumental in rallying men to fight that he was tormented by the psychic demons of guilt.

‘I’ve decided to go off alone to Damascus, hoping to get killed on the way,’ he wrote to Britain’s Cairo-based spymaster Gilbert Clayton, his nominal boss, in June 1917. ‘For all sakes, try and clear this show up before it goes further. We are calling on them to fight for us on a lie, and I can’t stand it.’

Nothing makes sense unless Lawrence played a pivotal role; least of all his mental torment, his postwar breakdown, his retreat into the obscurity of service in the ranks through the interwar years.

Lawrence of Arabia’s War is an attempt to weave a complex web. Though much of it comprises conventional military history, it is an archaeologically and anthropologically informed military history. Not only is the story of the war told both ‘from above’, from the perspective of statesmen and generals, and ‘from below’, from the experience on the ground; it is also contextualised by geopolitics, ideology, landscape, ethnography, sociology, and even psychoanalysis.

Lawrence is our prism. Though the view sometimes pans all the way from London to Cairo to Mecca; though the focus shifts from giant battles of heavy guns and tens of thousands to fleeting desert skirmishes involving mere handfuls; though it concerns complex intersections among the declining Ottoman Empire, the Bedouin tribes, nascent Arab nationalism, and Western imperial ambition; despite this, it is possible to observe the entire conflict that raged across the region between 1914 and 1918 through the eyes of the man destined to become its most celebrated protagonist.

And in doing this, we find the historic roots of today’s divided, fractious, war-torn Middle East.

Neil Faulkner is a freelance academic archaeologist and historian and editor of Military History Monthly. A research fellow at the University of Bristol, he co-directed the Great Arab Revolt Project in Jordan (2006-14). His book A Visitor’s Guide to the Ancient Olympics is also available from Yale.

Lawrence of Arabia’s War: The Arabs, the British and the Remaking of the Middle East in WWI by Neil Faulkner is available from Yale University Press. 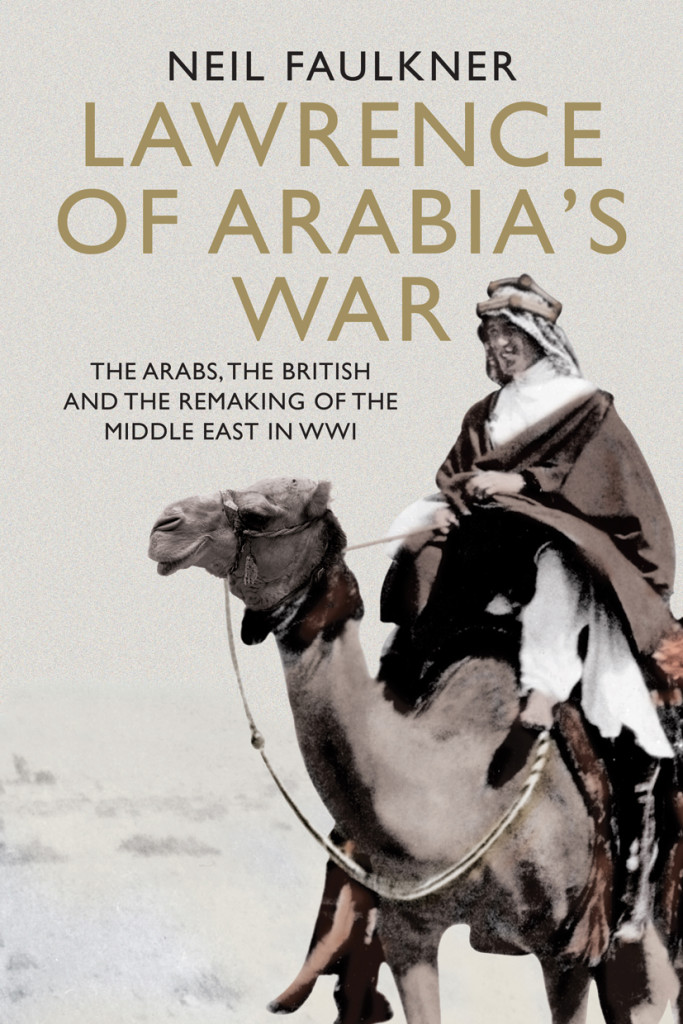 Featured image has been sourced from wikimedia commons here.

Joshua Chuang, Assistant Curator of Photographs at the Yale University Art Gallery and co-organizer of the The Place We…