To delve very far inside Turner’s mind we need to get inside his art, for that is almost completely where he kept it.

A complex figure, and divisive during his lifetime, Joseph Mallord William Turner (1775-1851) has long been considered Britain’s greatest painter. The new biography of the artist, Young Mr Turner: The First Forty Years, 1775–1815, gives a comprehensive and engaging account of Turner’s early life, drawing together recent scholarship, correcting errors in the existing literature and presenting a wealth of new findings.

Eric Shanes, author of this magnificent, lavishly illustrated volume, has devoted his life to studying the man and his oeuvre, and explains that ‘I never tire of looking at his works. He is inexhaustible’. To find out more about Turner, and why he is such a perennial figure of interest for so many, we asked Eric Shanes some questions about his own fascination with England’s greatest Romantic landscapist.

Yale University Press: Why your life-long interest in Turner?

Eric Shanes: I discovered Turner’s work when I was a schoolboy. His intense sense of the beauty of the world, his sense of almost cosmic scale and of grandeur, his unsurpassed awareness of detail, his responsiveness to the appearances of things and his amazing technical virtuosity all profoundly stirred me. That love has lasted a lifetime, and I never tire of looking at his works. He is inexhaustible.

YUP: How did you begin working on Turner?

ES: One evening in 1977 my wife and I had some friends over for dinner. As they constituted a very successful man-and-wife publishing team, the conversation naturally turned to books, and then progressed to the manuscripts that our guests frequently received from authors hoping to find a publisher. At that point I piped up, ‘Oh, I’ve got an idea for a book’. Instinctively our friends flinched, groaned, grimaced and glumly exchanged deeply meaningful glances. Clearly they were thinking ‘We are eating this man’s dinner and so we’ll have to humour him. But how do we tell him his idea stinks?’ Very reluctantly, therefore, one of them made the necessary enquiry. ‘Well’, I declared, ‘there is this group of marvellous watercolours by Turner known as the ‘England and Wales’ series. It has never been exhibited in its entirety and it could only ever be reconstituted within the covers of a book. Let me tell you all about it…’..

Our friends listened with jaws agape. They loved the idea – indeed, they loved it so much that within three weeks they had given me both a contract and an advance. The huge strength of their professional instincts was subsequently proven by the fact that the resulting publication went on to sell 35,000 copies, a then-record for an expensive art book and the most copies of a single book on Turner that have ever been sold. The rest, as they say, is history, with one book leading to another. To date I’ve written 24 books and exhibition catalogues, as well as innumerable essays and the like, many of them on Turner. Other artists on whom I’ve written include Brancusi, Warhol, Dalí, the Impressionists in London and Winslow Homer.

ES: At the centre of our understanding of any artist’s work stands a biography that new discoveries can, in a sense, be fitted into to fill out the narrative. With Turner that central life of the artist is now over 75 years old. Although three more biographies have appeared since, like their three predecessors they each share two interrelated failings: they are virtually unillustrated and — because they therefore lack almost any user-friendly means of exploring the artist’s images — they are forced to dwell mostly on Turner the man, even though Turner the man is always far less than half the story. Divorced from his painting, Turner’s life is rather thin stuff for a biographer. But no biography should ever limit itself to the actions and personal relationships of its subject; instead, it should help us enter that person’s mind, to find out exactly what made or makes them tick. To delve very far inside Turner’s mind we need to get inside his art, for that is almost completely where he kept it. By means of 500 illustrations and the detailed analysis of many of his images, it is hoped that a great deal of that reach is attained in my study of the first half of the artist’s life.

YUP: Will you be giving us the second half of that life?

ES: Indeed, I plan to begin work on it very shortly, so that the painter’s life story can reach its conclusion in just a few years time.

Eric Shanes is a professional painter, independent art historian and lecturer. He is a leading expert on Turner, a vice president of the Turner Society, and the author of many books on the artist, including Turner’s England (1990) and Turner’s Watercolour Explorations (1997). 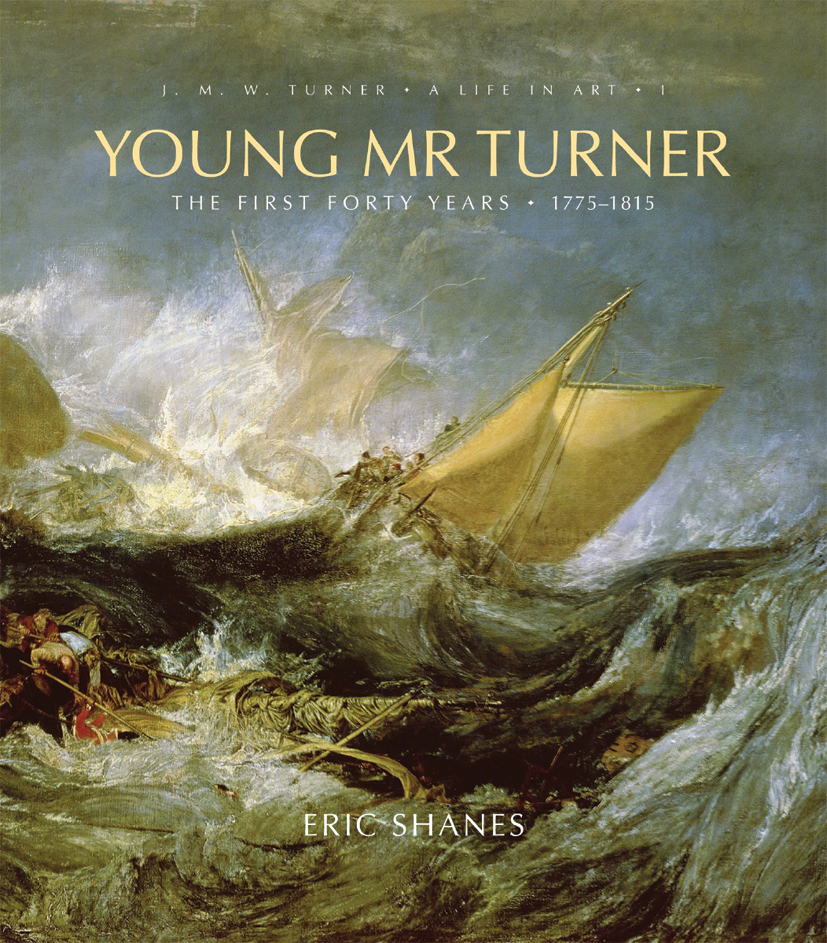