Russia and the Arts: The Age of Tolstoy and Tchaikovsky, the most important exhibition of Russian portraits ever to take place at a UK museum, opens today, at the National Portrait Gallery in London. The show, covering the period between 1867 and 1914, features 26 key portraits of famous Russian cultural figures and represents a dialogue between cultural forms, including music, literature and poetry. Curator and Yale author Dr Rosalind Blakesley describes how:

‘This exhibition provides an unprecedented opportunity to appreciate
the excitements of Russian Realism, Impressionism, and Symbolism
through the portraits of some of Russia’s most creative figures.’

The show, part of a pioneering cultural exchange with Moscow’s State Tretyakov Gallery, hangs the portraits at a more accessible level than previously exhibited, putting us face to face with some of the great figures from the Russian arts, including Tchaikovsky, Turgenev and many more.

Highlights from the exhibition include a portrait of Leo Tolstoy, which shows through his dress a growing engagement with the common man; Dostoyevsky by Vasily Perov, the only painting made of the writer from life; and a haunting painting of composer Mussorgsky by Ilya Repin. Repin painted the composer during a stay in hospital, the result of his spiralling alcoholism, and he is pictured in his dressing gown. Tragically, and in spite of a brief period of abstinence, Mussorgsky died just ten days after he sat for this portrait.

This painting of Mussorgsky (above), can also be found in Rosalind Blakesley’s new book for Yale, The Russian Canvas: Painting in Imperial Russia, 1757-1881, which charts the remarkable rise of Russian painting in the 18th and 19th centuries. This ground breaking study recontextualises the work of major artists – many of whose later compositions can be seen in the NPG show – reviving their reputations, and exploring the complex developments that took Russian painters from provincial anonymity to international acclaim. 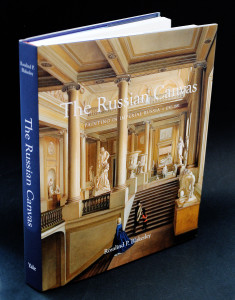 Together, Russia and the Arts at the National Portrait Gallery and The Russian Canvas, published this month, invite art lovers to reconsider Russia’s star-studded cultural heritage and extraordinary artistic tradition, as well as the nature of Russian painting’s relationship with other European schools.

The Russian Canvas: Painting in Imperial Russia, 1757-1881 by Rosalind Blakesley is available from bookshops, or you can place an order via the Yale website.

Rosalind P. Blakesley, reader in Russian and European art at the University of Cambridge, is a specialist in Russian art and in the Arts and Crafts Movement.

Russia and the Arts: The Age of Tolstoy and Tchaikovsky is on at the National Portrait Gallery from 17 March to 26 June 2016. A catalogue to the show is available from the NPG.

Cubism at the Metropolitan Museum of Art

As one of the most influential art movements of the early-twentieth-century, cubism holds its place as a heavyweight…