Stephanie Barczewski’s new book Heroic Failure and the British, offers a fresh way of thinking about the continuing legacy of Empire in British culture today by looking back over the past two hundred years. In this extract from the book, Barczewski introduces the idea of British heroism, citing examples ranging from from John Cleese to Rudyard Kipling.

Heroic Failure and the British – from the Introduction

Encompassing three-quarters of a century of statuary, Waterloo Place provides an opportunity to examine the evolution of British conceptions of heroism from the early nineteenth to the early twentieth century. The most prominent commemorative impulse was provided by the Crimean War, with five of the ten statues (the memorial to the Brigade of Guards, Herbert, Nightingale, Clyde and Burgoyne) relating to it. Though the British emerged victorious in the Crimea, the war was most frequently remembered for the difficulties of the War Office in supplying troops, which resulted in the deaths of thousands of men during the winter of 1854–55, and for the debacle of the Charge of the Light Brigade at Balaclava, in which a misinterpreted order resulted in an unsupported cavalry charge being made into a valley that was surrounded on three sides by Russian artillery. Of the remaining five monuments, one was imperial (Lawrence), two were royal (the duke of York’s column and Edward VII) and two were polar explorers (Franklin and Scott). Both of the latter men died in the course of their explorations. Franklin, along with 128 of his men, perished in the search for the Northwest Passage in the late 1840s in what remains as by far the worst disaster in British exploration history. Scott died with four of his companions in 1912 on the return journey from the South Pole, after having been beaten by the Norwegian explorer Roald Amundsen in the race to become the first person to reach it. Waterloo Place thus represents not only a rare use of London’s urban space for commemorative purposes, but a strange one. Most of its monuments recall events – the Crimean War and the polar expeditions of Franklin and Scott – that were widely perceived by the British public as failures rather than triumphs. Why, one might ask, would such a prominent and precious space in London be used to commemorate these particular events and persons?

The answer relates to a strain in British culture that embraces the nobility of suffering, defeat and heroism in the face of disaster over triumphalism and the glory of victory. In this conception of heroism, effort, perseverance, pluck and grace under pressure are seen as more important than winning. In his autobiography, the comedian John Cleese recalls how his entire school was taken to see the Ealing Studios film Scott of the Antarctic in 1948:

We were all deeply impressed by Scott’s uncomplaining acceptance of suffering. But you couldn’t help feeling that the message of the film was not just that the highest form of English heroism is stoicism in the face of failure, but that in Scott’s case a whiff of success might have tarnished the gallantry of his silent endurance of misery. After all, he and his men all froze to death while losing the gold medal to the Norwegians, in the same way that the magnificence of the Charge of the Light Brigade was enhanced by its utter futility, and General Gordon’s being calmly hacked to death was all the more impressive because it occurred during the complete annihilation of his forces at Khartoum. On the other hand, Lord Nelson’s and General Wolfe’s heroism may have lost a little of the sparkle by the close association with two all- important victories, even if they did get extra marks for being killed at the moment of their triumph. I think Americans must suspect that General Custer may have been of English descent.

Here, Cleese goes through a roster of the greatest hits of British heroic failure: the Charge of the Light Brigade, Gordon at Khartoum and Scott of the Antarctic, and asserts that they occupy a more prominent place in the national psyche than heroes who actually succeeded.

The British love of heroic failure that Cleese describes manifests itself in various ways. In polls asking Britons to name their favourite poem, Rudyard Kipling’s ‘If ’ regularly comes out on top. The work was inspired by Leander Starr Jameson, the leader of the eponymous raid that failed to provoke the British population of the Transvaal into a rebellion against the Boer government in 1895. It has enjoyed a special place in the affections of the public, if not of literary critics, ever since its publication in 1910, due to its celebration of stiff- upper- lip stoicism. When Captain Scott, another heroic failure, died in the Antarctic in 1912, the clergyman who gave the memorial sermon at the Royal Naval College in Dartmouth quoted lines from ‘If’ and then added: ‘If you can thus show the sportsman spirit – the Christian spirit – then your final victory will date from the day when somebody said of you, kindly or unkindly, “He has failed”; when you said to yourself, “Things have come out against me”.’ This was, according to the clergyman, ‘the blessing of failure’. The poem became so popular that even Kipling grew sick of it.

The popularity of ‘If’ today shows the continuing importance of magnanimity, fortitude and calm in the face of disaster as a British cultural ideal.

Stephanie Barczewski is professor of history at Clemson University and the author of Titanic: A Night Remembered, among other books.

Read more about the book here. 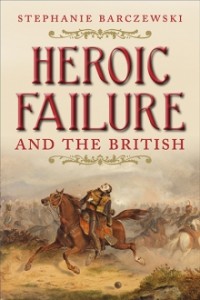 An A-Z of the World – E. H. Gombrich: Introduction