Austrian satirist Karl Kraus’s famous Die letzten Tage der Menschheit – or in English The Last Days of Mankind – remains powerfully relevant in its enactment of the tragic trajectory of the First World War, when mankind raced towards self-destruction by methods of modern warfare, while extolling the glory and ignoring the horror of an allegedly ‘defensive’ war.

Edward Timms, co-translator of the first complete English edition of Kraus’s masterpiece, looks at why The Last Days of Mankind continues to be a seminal text – both in translation and in its original language – and shows how we might view it alongside works by other literary giants, such as poet Robert Graves. 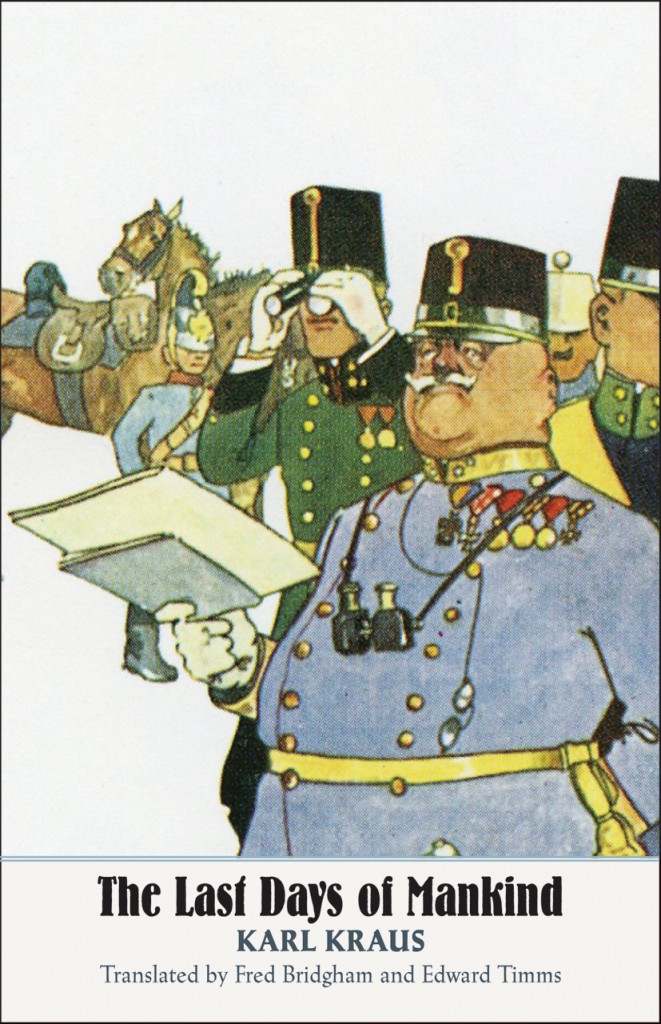 The date is June 1914, the setting a street corner in Vienna, and the tragedy begins with the following exchanges between News Vendors and Passers-By:

PASSER-BY: (to his wife) Not a Jew, God be praised.

This exchange acts like the key to a musical composition, showing how Kraus orchestrates the speech patterns of different classes and ethnicities – a formidable challenge to translators. It sets up a counterpoint between two of the most significant minorities in the Habsburg Empire – Serbs and Jews.

The overall subject of Kraus’s play, as the title indicates, is the tragedy of mankind, bent on self-destruction by the awesome means of modern warfare, while still clinging to outdated ideals of military heroism and national glory. But interwoven within that framework are a multitude of more specific strands, each embedded in its distinctive cultural matrix: bungled Austrian diplomacy, aggressive German expansionism, ruthless military leadership, brutal ethnic cleansing, the greed of war profiteers, the gullibility of newspaper readers and above all the sloganizing of the press. ‘Serbia – we’ll murder ’er!’ becomes the battle cry that launches a world war.

Thus as translators my colleague Fred Bridgham and I faced a double challenge. Could we find English equivalents for those ‘Jewish’ speech patterns?

Of the 200 scenes in this sprawling play with its disconcerting mix of historically authentic and imaginatively invented characters, only a minority are set in a specifically Jewish milieu. But in Kraus’s immense satirical panorama we encounter a variety of characters whose speech patterns betray traces of Yiddish or similar deviations from standard German. Thus as translators my colleague Fred Bridgham and I faced a double challenge. Could we find English equivalents for those ‘Jewish’ speech patterns?  And if so, should we make such passages sound specifically ‘Jewish’ in our translation?

In cases where Kraus introduces familiar Yiddish words into the dialogue, such as ‘nebbich’ or ‘meschugge’, the task is relatively easy. A comparable English-Yiddish or American-Yiddish word can be used. But frequently the ‘Jewish’ speech rhythms have more subtle socio-linguistic implications. They signal that in the predominantly Christian Europe of the First World War even educated and professionally successful Jews felt themselves to be outsiders. The German word that Kraus coined for this phenomenon in his magazine Die Fackel (The Torch) was ‘Draussenstehende’ – ‘people standing outside’. Jews in the diaspora, according to this socio-linguistic insight, feel they are on the outside looking in – a motif that in some sense applies to Kraus himself (a Jew who had converted to Catholicism).

At the outbreak of war in autumn 1914 many Jews were in the process of assimilating to gentile society, whether in England or Germany, Austria or France. Their aim was to become fully accepted citizens of their chosen nation. What Kraus recognizes – and repeatedly dramatizes – is that they are trying too hard, not least because of the resistance they encounter, and they never quite make it.

The First World War provided German-speaking Jews with an unprecedented opportunity to break out of this double-bind. Many of them patriotically volunteered for front-line service, while others became eloquent propagandists for the alliance between Germany and Austria-Hungary. But in in The Last Days of Mankind, Jews who passionately support the war are satirized as super-patriots. They are portrayed composing poems or songs or newspaper articles that are even more fanatically pro-German (or pro-Austrian) than those by German or Austrian gentiles. They are longing for a new ‘Heimat’ – to replace the home they have lost through migration. And this frustrated impulse is captured time and time again in Kraus’s play.

I say ‘captured’ because of Kraus’s documentary technique. In many scenes he does not actually invent anything. Instead, he reproduces – as dramatic monologue or dialogue – the purple prose that over-enthusiastic authors or journalists have published – in their misguided efforts to prove their patriotism. The satirical comedy arises from the gap between these exalted aspirations and the increasingly disastrous events of the war. Further disillusionments occur if and when Jewish super-patriots do manage to get inside: inside the coffee-house or the bureaucracy, the editorial office or the stock-exchange.  For what they find there is not ‘homely’ at all, but – as Kraus sees it – the scene of cynical competition and frustrated self-advancement.

Hence our second question:  should we in our translation consistently attempt to make such scenes sound specifically ‘Jewish’? One way of clarifying this question is by posing a parallel question: When translating the many scenes in the play that satirize mainstream German militarism and Pan-German imperialism, how should we translate the word ‘Vaterland’?  Should it always be ‘Fatherland’?  We felt that this would limit the impact of Kraus’s satire by implying he is only critiquing German (or Prussian or Austrian) militarism. But actually he is writing the tragedy of mankind with implications for the super-patriots of all the belligerent nations. So sometimes we anglicize the implications of the anti-German satire:’ Vaterland’ is rendered as ‘my country, right or wrong’ or even fighting ‘for King and Country’.

A similar tendency towards universalizing seems justified with respect to certain Jewish motifs, especially. the tendentious nonsense produced by some of the journalists featured in Kraus’s play, writers with real-life names, such as Alice Schalek and Alfred Kerr. The essential point is not that such writing is ‘Jewish’, but that it is ‘journalistic’ in the worst sense of the word: distorting the truth in order to gain some short-term political, military, social or financial advantage.

He is writing the tragedy of mankind with implications for the super-patriots of all the belligerent nations.

The problem becomes acute in scenes that satirize Moriz Benedikt, the Austrian Jewish editor-in-chief and principal leader writer of the Neue Freie Press, the ‘Times’ of Austria-Hungary. The insidious effects of his flamboyant war-mongering are featured so prominently that by the time we reach the verse epilogue, ‘The Final Night’, Benedikt has been transformed into the Antichrist, responsible for world destruction.  As translators, we try to capture the biblical resonances of this concluding apocalyptic tirade. But in other scenes, especially the speeches of Kraus’s raisonneur, the Grumbler, we distinguish the objectively valid dimensions of his critique of war propaganda from the network of Jewish associations with which it becomes entangled.

To contextualize this issue, we refer in our Afterword to a passage in Kraus’s magazine Die Fackel  that juxtaposes a photo of Moriz Benedikt against a bust of Lord Northcliffe, the chauvinistic British press magnate who controlled The Times and the Daily Mail. The heading identifies Northcliffe as the ‘English Benedikt’ and Benedikt as the ‘Austrian Northcliffe’. There is a clear implication that if there had been any English satirist worth his salt, the proprietor of The Times would have been targeted for his jingoism as fiercely as Kraus mocks the rhetoric of the Neue Freie Presse.

There is indeed an English writer whose memoir of the First World War neatly encapsulates Kraus’s findings: the poet Robert Graves, author of Goodbye to All That. Graves, who had served with the British army on the Western front, describes how he felt when returning home on leave: ‘England was strange to the returned soldier. He could not understand the war madness that ran about everywhere, looking for a pseudo-military outlet. Everyone talked a foreign language; it was newspaper language’. This takes us to the heart of the issues dramatized in The Last Days of Mankind:  the connections between ‘pseudo-militarism’, ‘war madness’ and ‘newspaper language’ – and their impact on the destinies of mankind.

The Austrian Jewish author Karl Kraus (1874-1936) was the foremost German-language satirist of the twentieth century. As editor of the journal Die Fackel (The Torch) he conducted a sustained critique of propaganda and the press, expressed through polemical essays, witty aphorisms and resonant poems.

Edward Timms, founding director of the University of Sussex Centre for German-Jewish Studies, is best known for his two-volume study Karl Kraus: Apocalyptic Satirist. The title of his memoirs, Taking Up the Torch, reflects his long-standing interest in Kraus’s journal. Fred Bridgham is the author of wide-ranging studies in German literature, history and the history of ideas. His translations of lieder and opera include Hans Werner Henze’s The Prince of Homburg for performance by English National Opera.

You can find The Last Days of Mankind by Karl Kraus here.

Read more about our Margellos World Republic of Letters series

Images are sourced from WikiCommons and can be found here.