Dr. Samuel Johnson’s Jamaican manservant and heir, Francis Barber, has been gaining attention over the past year. In spring 2015 Yale released the biography The Fortunes of Francis Barber by Michael Bundock and now, Barber – so often mentioned in James Boswell’s Life of Johnson and other contemporary sources – has been put on the London stage in Sir Richard Eyre’s production of Mr. Foote’s Other Leg.

Writer Ian Kelly, who has adapted his book Mr. Foote’s Other Leg for the stage, explores the Francis Barber story and his character as it appears in the play, and tells us why he is fascinated by the lost voices of the 18th century.

Mr. Foote’s Other Leg runs until 23 January 2016 at the Theatre Royal Haymarket

Mr Foote’s Other Leg, a play currently in London’s West End directed by Sir Richard Eyre and starring Simon Russell Beale, represents an unusual page-to-stage adventure in a number of ways. Based on the biography of Samuel Foote, long neglected 18th century comic and quondam proprietor of the Theatre Royal Haymarket, where, by wonderful coincidence, the play is now running, Mr Foote also features another lost hero of 18th century culture: Dr Johnson’s heir Francis Barber. Unlike Samuel Foote, whose story is represented more or less historically accurately on stage, Francis Barber is there in the play in largely fictionalised form. Why?

I have long been fascinated by the lost voices of the 18th century – the lives of servants and ne’er-do-wells, the stories of the courtesans and cooks, the forgotten or neglected. Witness, I suppose, previous biographies of Carême, the great chef, of Giacomo Casanova, the Venetian gadabout and lover, of Beau Brummell the dandy. Sometimes the view of history from the sidelines – from below stairs or indeed from the wings, can be illuminating. Which is what brought me to Samuel Foote – one legged comedy hero of the Georgian stage, occasional transvestite, and contemporary and friend of, amongst others, Samuel Johnson, Benjamin Franklin and the celebrated actor David Garrick. Foote’s story has been lost, as too of course have been the stories of most of London’s substantial black population in the 18th century.

‘Freed’ former ‘slaves’ some of them, they are represented in the art and the anecdote of the period – even in the works and words of Sam Foote – but the perspective is rarely theirs. It is possible the coachman-cum-valet John Sangster, who worked for Foote and who accused him of sodomitical assault, was black. We know little about him, except that his testimony effectively ended Foote’s career and buried his reputation. So when I was commissioned to adapt the Foote biography as a play, it struck me as liberating, in its way, to deliberately have one character drawn from elsewhere in the panaroma of Georgian London, a man from another ‘underclass’ about whom we knew more, and that character was Barber. He is, in effect, the moral centre of the play – the one man whose back-story – as a former slave – is even more traumatic than Foote’s, who was afflicted with various psychological demons but who also lost a leg in an unanaesthetised amputation.

Without Barber, the fictionalised character, the stage character of Foote could not be redeemed in the ways he is.

Without Barber, the fictionalised character, the stage character of Foote could not be redeemed in the ways he is. But also, just as the play has helped pique interest in Foote, the inclusion of Barber has done the same for the true story of Dr Johnson’s manservant, and in Michael Bundock’s magisterial revivification of this man and his reputation. In fairness, at its simplest, Barber was in the play in an earlier draft as a way to introduce Dr Johnson into the plot – a device and character cut many drafts ago. But the more I wrote of Frank, the more I wanted him to stay in the play, in the place of Sangster. I am working now on a film adaptation of Bundock’s book – the true story – as mitigation.

The real Frank Barber (c.1742-1801) was born into slavery on a sugar plantation in Jamaica, came to England as a boy and went on to work as a household servant for Dr Samuel Johnson. For some years he worked elsewhere, including a period spent serving in the navy, When Johnson died, he left the bulk of his estate to Barber, who went on, as argued by Michael Bundock in his biography of Barber, to open a school and therefore be plausibly Britain’s first black schoolmaster. Just as Foote stands as a lost comic viewpoint on some of the great names and themes of his era – satirizing Johnson, Garrick and Henry Fielding amongst others – Barber’s story too illuminates the apparently familiar of Augustan London – one of the few servants whose stories we know to some extent, for all we know it, largely, from the perspective of those above stairs.

The singular triumph of Bundock’s book is to reverse the view and posit, for instance, the possibility that from Barber’s perspective the British navy offered other than the press-ganged hell imagined by Samuel Johnson but instead a semblance of community and a workplace with a partial sense of colour-blindness. In 18th century Britain the legal status of former slaves was unclear. There was argument over whether slaves were set free by coming to Britain, or by their baptism. In practice slave sales continued to take place, and the threat of being sent back into colonial slavery hung over any former slave until the Somerset judgement in 1772. Perhaps for this reason, it seems some of the black community found employment on the fringes of respectability – in the theatre, in music and indeed in the booming London sex industry.

Foote, like James Boswell, had an equivocal relationship with antislavery ideas, but seems to have felt an affinity with various London underclasses as a political satirist on the fringes of respectability himself – he may have been ‘gay’, he was assuredly at his most comfortable as a performer as a drag artist. Partly therefore the inclusion of Barber in my play freed me towards the journey I wanted into inaccessible areas of Foote’s life: his interest in different concepts of freedom, his sexuality, his identification with an ‘underclass’ – and partly because one of the first things that made me laugh about Foote was his attempt to turn Othello into a comedy. More than this, a play about lost voices and the evanescent nature of theatre is also, perforce, a play about love – its inaccessibility to the historian in understanding motive relationships from the past.  The misplaced attraction between Foote and his footman, and the imbalanced and shifting affection between Johnson and Barber are stories of love, of misjudged paternalism perhaps, of class and race divides – and also stories that stretch the resources of the historian but are meat and drink to a dramatist.

Mr Foote’s Other Leg, the biography by Ian Kelly (Picador PanMacmillan) was named Theatre Book of the Year by the British Society of Theatre Research in 2013.

More about Francis Barber on the YaleBooks blog here. 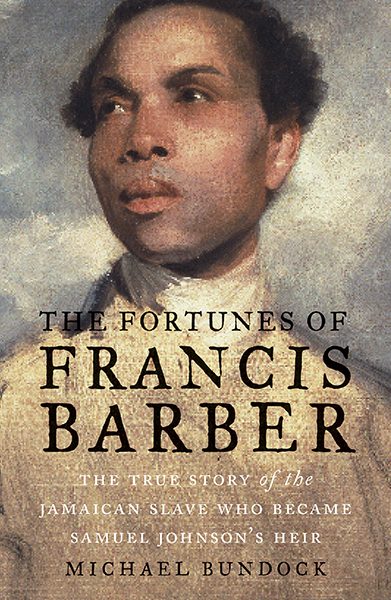 Is writing more your new year’s resolution? Whether you are finishing up a first draft or going through…