‘A must for history lovers, but will be enjoyed by all who turn its glorious pages with some unforgettable illustrations.’ – Bill Spence

Medieval prayer books contained not only the devotions and meditations of Christianity, but also housed, secreted between their pages, sundry notes, reminders and ephemera, including pilgrims’ badges, sworn oaths and small painted images. Many of these decorative items have been classified as manuscript illumination, but in a new book, Kathryn Rudy argues that these pictures might instead be called, ‘parchment paintings’, similar to postcards.

View inside Postcards on Parchment: The Social Lives of Medieval Books

Postcards on Parchment: The Social Lives of Medieval Books is a delightful study that identifies this group of images for the first time, and explores how these objects functioned apart from the books in which they were kept. Whereas manuscript illuminations were designed to provide a visual narrative to accompany a book’s text, parchment paintings offered a kind of autonomous currency for exchange between individuals – people who longed for saturated colour in a grey world of wood, stone and earth. Small, intensely colourful pictures offered a brilliant reprieve, and Kathryn Rudy shows how these intriguing and previously unfamiliar images were traded and cherished – shedding light on the everyday experiences and relationships that constituted medieval life in the Low Countries.

Kathryn M. Rudy is senior lecturer in the School of Art at the University of St. Andrews.

Postcards on Parchment: The Social Lives of Medieval Books is available from Yale. 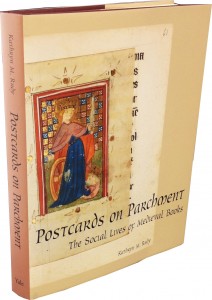 Top Brass – The Trumpet and its Legacy: Author article by John Wallace

Trumpeter John Wallace is Principal of the Royal Scottish Academy of Music and Drama in Glasgow. His book…