The rufa red knot sandpiper and the common horseshoe crab, two relatively unassuming creatures, are the focus of a fascinating new book by Deborah Cramer, The Narrow Edge: A Tiny Bird, an Ancient Crab, and an Epic Journey. The story of both these animals, whose numbers have substantially decreased in recent years, reveals alarming patterns in climate change. Here, Yale presents the opening paragraphs of a captivating article written by Cramer for Wellesley Magazine, where the author discusses her journey researching The Narrow Edge and the visible effects of climate change that she witnessed along the way.

Flight to the Arctic

It is June, but it doesn’t feel like summer. Instead of kayaking through the salt marshes near my home in Gloucester, Mass., swimming off the sandbars, and welcoming home our vacationing adult children, I am waiting out an intense Arctic storm in Nunavut, Canada’s northern-most territory. I am with a team of field scientists on the remote tundra of East Bay, Southampton Island, at the head of Hudson Bay, just below the Arctic Circle. The temperature is well below freezing; the wind chill makes it feel colder. I am wearing every piece of cold-weather clothing I have – two layers of long underwear, fleece pants and vest, wool sweater, wind pants, and parka – and if I don’t keep moving, I’m still cold.

I’ve come here to write a book about a bird, Calidris Canutus rufa, the red knot – a small sandpiper weighing no more than a coffee cup. One of six subspecies worldwide, rufa red knots migrate along the length of the Earth, each year flying an almost inconceivable 20,000 miles along the edges of two entire continents. Their numbers have dropped precipitously. In December 2014, the United States Fish and Wildlife Service listed them as threatened under the Endangered Species Act, the first bird in the U.S. listed because global warming imperils its existence. They are losing their shoreline homes due to rising sea level and storm surges, and a warming ocean may lead to a mismatch between the times birds arrive at their feeding grounds and the peak production of their food.

I’ve followed the birds on their long journey, beginning on the remote beaches in Tierra del Fuego, off the southern tip of South America, and moving north through touristed beaches in Argentina, hunting reserves in South Carolina, slivers of sand in Delaware, and then, finally, to their nesting grounds in the Arctic, where if all goes well – and it often doesn’t – the birds bring forth a new generation to begin a new migration. Wellesley’s Mary Elvira Stevens Traveling Fellowship, Canada’s National Wildlife Research Centre, the Canadian Wildlife Service, the Curtis and Edith Munson Foundation, the Norcross Wildlife Foundation, and the Ocean Foundation enabled me to accompany knots to their faraway, difficult-to-reach homes, and to witness the challenges faced by shorebirds on a rapidly changing and increasingly fragile sea edge.

For the full article visit the Wellesley Magazine website.

Deborah Cramer is the author of Great Waters: An Atlantic Passage and Smithsonian Ocean: Our Water, Our World.

The Narrow Edge: A Tiny Bird, an Ancient Crab, and an Epic Journey by Deborah Cramer is available from Yale. 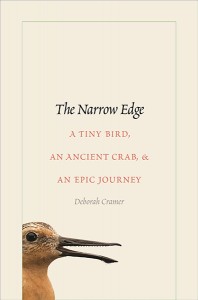