James Davey, author of the new book In Nelson’s Wake and curator of the National Maritime Museum, reexamines the ‘famous’ Battle of Trafalgar that took place on 21 October 1805. On the anniversary of this historic event, now known as Trafalgar Day, Davey reviews the Royal Navy’s role in the battle and questions if it should in fact be considered a great victory for Britain after all.

It always surprises me that even the most well-known episodes from Britain’s past are constantly being reconsidered and revised. As a curator at the National Maritime Museum, there is no more familiar event than the Battle of Trafalgar, fought off the south-west coast of Spain on 21 October 1805. However, even this famous action is not exempt from historical review. I recently finished writing a book, published by Yale University Press, covering the history of the Royal Navy during the Napoleonic Wars, entitled In Nelson’s Wake, and was forced to directly confront a number of assumptions about the battle.

‘Much of what successive generations have understood about the battle comes down to the way it was presented to the public at the time.’

To this day, Trafalgar remains one of the most celebrated chapters in British history, and many aspects of the battle have become entrenched in both the public consciousness. It is commonly understood that that Trafalgar was a decisive moment in the Napoleonic Wars – the French and Spanish navies received a devastating blow from which they never recovered, in the process ending Napoleon’s invasion attempts and presenting Britain with a complete command of the ocean. Furthermore, as an example of British martial valour it has few peers; it is assumed that the Royal Navy’s officers performed bravely, fighting alongside sailors who had complete faith in their commanders. News of the success was then carried triumphantly back to Britain where the government dutifully passed it on to the waiting nation.

However, as I read more and more about the battle, it soon became clear to me that much of this received narrative is in need of substantial modification. To begin with the fighting itself, many of the British captains conducted themselves appallingly; some of the British ships took hours to enter the battle, allowing 15 enemy ships to escape. Some protagonists saw the result of the battle as a missed opportunity, rather than a great victory. Indeed, if one considers the broader war, Trafalgar was not at all decisive. Napoleon had abandoned his invasion attempts two months before the battle, choosing to focus on a new enemy to the east; he swiftly destroyed the Austrian and Russian armies at Austerlitz, leaving France the dominant power on the Continent. Nor did Trafalgar did not provide Britain with an unquestioned superiority at sea, for in the aftermath of the victory four enemy fleets remained at large in the North Atlantic, and Napoleon embarked on a vast shipbuilding programme to replace those vessels that had been lost. The naval war was far from over.

Much of what successive generations have understood about the battle comes down to the way it was presented to the public at the time. Vice-Admiral Cuthbert Collingwood, who took command of the fleet following Nelson’s death, organised a furtive cover-up to silence any notion that British commanders had under-performed. The Admiralty also took care to present the battle in the most favourable manner, and Collingwood’s despatches were censored for potentially damaging or unwelcome information. The subsequent announcement of a British victory was therefore a calculated piece of propaganda deployed to enhance and sustain popular loyalism in a war, one that gave rise to a myth of ‘total victory’ that has lasted until the present day.

What, then, does this mean for our understanding of the Battle of Trafalgar? It remains an important event, for while it was not fully decisive, it certainly presented Britain with a vital naval advantage and inflicted a great psychological blow on the French navy. From the perspective of the 21st century, though, its significance lies less in the immediate strategic consequences but in its wider social and cultural meaning. Trafalgar became a victory to rival Napoleon’s success on land, and in the subsequent years of war, Nelson’s deeds remained a prominent example of manliness, heroism and national duty, and a yardstick for all who followed in his wake. This was significant, for in the following years the Royal Navy was to play an ever greater role in thwarting Napoleon as the war at sea grew in scale and intensity.

James Davey is Curator of Naval History at the National Maritime Museum. He is the author of The Transformation of British Naval Strategy: Seapower and Supply in Northern Europe 1808–1812 and In Nelson’s Wake: The Navy and the Napoleonic Wars, available to buy from Yale University Press. You can browse more history books from Yale here. 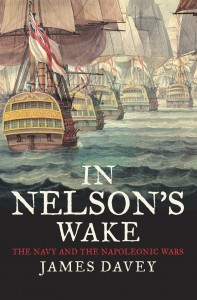 Our staff members recommend their favourite Yale holiday reads. A book you can read at the beach or…