‘In a pre-mechanical world, where human muscle was one of the main forms of motive power, young, fit people were a precious natural resource and the supply was never equal to the demand.’

The Byzantine empire stood firmly between the geographical borders of the East and West for over a thousand years from the fourth to the fifteenth century, connecting the classical past with the modern period. The Byzantines left a considerable imprint on both western and eastern civilisations over these years, with their establishment of Orthodox Christianity and preserving many classical texts, artworks and traditions for generations to come. Jonathan Harris, author of The Lost World of Byzantium, examines Byzantine policies towards mass migration, revealing an Empire that was highly resourceful and surprisingly tolerant.

Mass Migration and the Lost World of Byzantium

From long before the Jewish exodus from Egypt in around 1200 BCE, movement of peoples has been a constant feature of human history which makes it all the more puzzling that the response of governments around the world to the arrival of refugees and migrants on their doorsteps is usually so haphazard. The rulers of the medieval Byzantine empire (also known as ‘Byzantium’), on the other hand, developed a sophisticated if not particularly humanitarian policy for dealing with the issue. That was mainly because sweeping it under the carpet was simply not an option. Throughout the empire’s long existence (c.330-1453 CE) wave after wave of westward-migrating peoples came up against its borders. It was pressure from Germanic tribes in the fourth and fifth centuries CE that largely caused the collapse of the western Roman empire and left its eastern half to develop into Byzantium, a Christian, Greek-speaking empire centred on Constantinople (modern Istanbul). The pressure continued in the centuries that followed for the empire’s remaining territory in the Balkans and Asia Minor (what is now Turkey) was situated at the end of what might be called an ethnic bowling alley on the route west from the steppes of Asia. Some migrants, such as the Turkic Avars, were bent on conquest and plunder. Others were merely looking for safety as they fled from rising powers in the east.

The emperors of Byzantium and their advisers had no choice but to formulate some kind of response to this threat. The obvious course of action was to fortify the borders and push the migrants back and that could bring a measure of relief. Campaigns against the Slavs on the Danube frontier during the 590s were ostensibly a great success. Every time the Byzantine army met these adversaries, it came off best in the encounter. In the long term though, military confrontation failed to resolve the problem. If one group were neutralised, two more would arrive to take its place. Moreover, the military option always ran the risk that things might go horribly wrong. In 378 an entire Byzantine army along was wiped out by the Goths who had recently crossed the Danube frontier. Emperor Nikephoros I and his army suffered a similar fate at the hands of the Bulgars in 811.

So it was that the rulers of Byzantium sought alternatives to military action as a way of deflecting the human tide and even turning it to their advantage. At a very early stage they perceived the wisdom of allowing limited numbers to cross the border. In a pre-mechanical world, where human muscle was one of the main forms of motive power, young, fit people were a precious natural resource and the supply was never equal to the demand. The newcomers could be settled on untilled land which was thus brought into production and they could provide military service in the Byzantine army when danger threatened. This was all very well but how could the loyalty of the new arrivals be ensured? There were cases their deserting to the enemy on the eve of battle. Some compelling reason was needed to for them to give their allegiance to the emperor in Constantinople as opposed to anyone else. One tried and tested means was a simple bribe. The emperor was fortunate enough to preside over a relatively sophisticated money economy from which he drew a healthy annual tax revenue. From this regular donations of gold coins could be made to the newly integrated soldiers. Such largesse was usually enough to keep them onside in the short term but more was needed: something that would make loyalty to the emperor not just an advantage but a sacred duty.

The Byzantines exploited the fact that the migrant tribes had had no experience of urban life before they crossed the frontier, having passed their days on the march and in small settlements of huts. It became standard practice to invite their leaders to visit the emperor in Constantinople. One of them was so awestruck by the great public squares, the monumental cathedral of the Holy Wisdom and the imperial palace that he declared that the emperor must be a god on earth and that if anyone lifted a hand against him, he would be asking for death. More often than not the visiting chieftain would accept baptism into the Christian faith and for the Byzantines religion was not just a matter of personal conscience. The emperor was seen as a kind of representative of God on earth, put there to guard the interests of all Christians. To rebel against him was to rebel against God. In a superstitious age, it worked.

Of course, the way the Byzantines dealt with mass migration is hardly to be recommended for the twenty-first century. But at least they had a policy and recognised that, as long as conditions are better in one part of the world than in another, people will be on the move.

The Lost World of Byzantium by Jonathan Harris is available from Yale University Press. 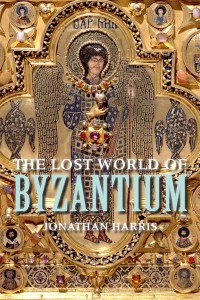 Homo Economicus Becomes Human The Moral Economy: Why Good Incentives Are No Substitute for Good Citizens Review by Lyric…