In part three of our blog series celebrating publication of The Maisky Diaries, Gabriel Gorodetsky selects and introduces an extract to coincide with the anniversary of the declaration of war, which took place on 1 September 1939.

‘Only the sandbags under the windows and the yellow signs with arrows pointing to the nearest bomb shelters indicate that England is on the verge of war.’

Following the Ribbentrop-Molotov Pact Ivan Maisky had become a pariah in London. His survival was hanging by a thread. The Daily Herald spread rumours that he was being recalled to Moscow to report. Beatrice Webb felt sorry for him wondering whether their forthcoming encounter was ‘a farewell visit? I fear so … Poor Maiskys, we shall never see them again … With their friend, Litvinoff, they will disappear, let us hope safely, somewhere in the background of that enormous and enigmatic territory.’ For the moment Maisky, the astute observer, continued to record his impressions of the dramatic days leading to the outbreak of war. ‘You used to look down upon us from the Gallery in Parliament,’ recalled Harold Nicolson – author, diplomat and diarist – in a letter to Maisky, ‘with benevolent interest rather like a biologist examines the habits of newts in a tank.’

Another day of tension and suspense. … At about five o’clock, Agniya and I got into a small car and drove around town to see what was going on. It was the end of the working day. The usual hustle and bustle in the streets, on the underground, and on the buses and trams. But no more than usual. All the shops are trading. The cafés are open. The newspaper vendors shout out the headlines. In general, the city looks normal. Only the sandbags under the windows and the yellow signs with arrows pointing to the nearest bomb shelters indicate that England is on the verge of war.

In the evening, Agniya and I went to the Globe to see Oscar Wilde’s delicious comedy The Importance of Being Earnest. The actors were superb. An image of the ‘good old times’ – without automobiles, radio, airplanes, air raids, Hitlers and Mussolinis – seemed to come alive. People were funny and naive then, to judge by today’s standards. We laughed for two hours. That’s something to be grateful for.

When we got back from the theatre, the radio brought sensational news: the 16 points which Hitler demands from Poland. The immediate return of Danzig, a plebiscite in the ‘Corridor’, an international committee made up of Italian, British, French and Soviet representatives, a vote in 1940, and so on and so forth.

What’s this? A step back? Slowing down?

I doubt it. It’s too late for Hitler to retreat. It’s almost certainly a manoeuvre. Is it an attempt to hoodwink the world’s public and perhaps the German people as well before a decisive ‘leap’?

Yesterday’s doubts have been fully justified. Today, early in the morning, Germany attacked Poland without any prior warning and began bombing Polish cities. The Polish army and air force are putting up strong resistance everywhere.

So, war has begun. A great historical knot has been loosened. The first stone has rolled down the slope. Many more will follow. Today, the world has crossed the threshold of a new epoch. It will emerge from it much changed. The time of great transformations in the life of humankind is nigh. I think I’ll live to see them unless, of course, some crazy incident cuts my days short…

Parliament met at six in the evening. As I drove up to Westminster, photographers began snapping away. And why not? What a sensation: the Soviet ambassador at a parliamentary session on the matter of war. And this directly after the signing of the Soviet–German pact!

A nervous and panicky mood reigned in the Parliament corridors. A motley crowd of every age and status had gathered. There were many rather young women and girls, gesticulating frantically and speaking in raised voices. I walked down the corridors, saluted in the usual manner by the Parliament policemen, and approached the entrance to the diplomatic gallery. It was quite jammed with ambassadors, envoys, high commissioners and other ‘notables’. As soon as the door attendant caught sight of me, he pushed back a few ‘ministers’ to clear a narrow path for me to the staircase.

… I looked down. The small chamber of the Commons was full to bursting with agitated, tense MPs. They were packed in like sardines. The Government bench was just the same. All the stars – if there are any – were present: Chamberlain, Simon, Hore-Belisha, Kingsley Wood, and the rest. The atmosphere was heavy, menacing and oppressive. The galleries of the Lords, the press and guests were jam-packed. Near the ‘clock’, wearing plain grey suits, sat the duke of Gloucester and the duke of Kent. A few MPs were in khaki … All eyes were trained on me. The mood was the same: restrained hostility, but with a hint of deference. I calmly endured this bombardment of glances. Then I began to make out individual faces. Lady Astor, as is her custom, seemed to be sitting on needles, and looked at me as if she meant to grab me by the hair. Mander, Nicolson and Ellen Wilkinson looked at me with friendly, sparkling eyes. I had the impression that Eden also cast a quick, and not remotely hostile, glance at me, but I can’t say for sure.

Chamberlain, looking terribly depressed and speaking in a quiet, lifeless voice, confessed that 18 months ago (when Eden retired!) he prayed not to have to take upon himself the responsibility for declaring war, but now he fears that he will not be able to avoid it. But the true responsibility for the unleashing of war lies not with the prime minister, but ‘on the shoulders of one man – the German Chancellor’, who has not hesitated to hurl mankind into the abyss of immense suffering ‘to serve his senseless ambitions’. … At times, Chamberlain even tried to bang his fist on the famous ‘box’ on the Speaker’s table. But everything cost him such torment and was expressed with such despair in his eyes, voice and gestures that it was sickening to watch him. And this is the head of the British Empire at the most critical moment in its history! He is not the head of the British Empire, but its grave-digger! …

Unless an extraordinary miracle happens at the very last moment, Britain will find itself at war with Germany within the next 48 hours.

Today, the denouement really did take place … the prime minister went on air at 11.15 a.m. and declared that, as of then, Britain was at war with Germany.

Half an hour later the air filled with the bellowing sounds of the siren. People scampered off to their houses, the streets emptied, and cars stopped in the road. What was it? A drill? Or a genuine raid by German bombers?

Fifteen minutes of tension and anxiety – then we heard the prolonged siren wail: ‘all clear’! It had been just a drill. There were no enemy planes.

I got to Parliament by midday. I was a couple of minutes late because of the alarm. I took the first available seat in the second row. Chamberlain was already speaking. A darkened, emaciated face. A tearful, broken voice. Bitter, despairing gestures. A shattered, washed-up man. However, to do him justice, the prime minister did not hide the fact that catastrophe had befallen him.

I sat, listened and thought: ‘This is the leader of a great Empire on a crucial day of its existence! An old, leaky, faded umbrella! Whom can he save? If Chamberlain remains prime minister for much longer, the Empire is ruined.’ … 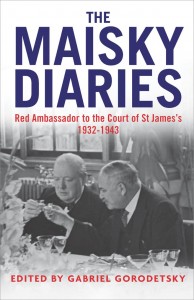 Francis Barber lived a remarkable life. As far as we know he was born a slave on a…