‘The line between slave and free was replaced by a new color line between black and white, enforced more than ever by brutal lynchings.’

On 28 August 1963 – still within living memory, and 52 years ago – civil rights activist Martin Luther King spoke to the American nation, sharing his dream of racial equality. In a new Little History book, focusing on the history of the United States, author James West Davidson looks back at events surrounding the speech, the challenges of the time and the words that made history.

… in August 1963, a quarter of a million Americans gathered in the March on Washington to champion the civil rights bill. Even then, Kennedy was wary. “We want success in Congress,” he argued, “not just a big show at the Capitol.” But the people came and the nation heard King remind Americans that a hundred years earlier, Lincoln had issued the Emancipation Proclamation.

The speech was a high-water mark for the civil rights movement, but hardly an ending to it. In the three months after Birmingham, almost eight hundred new protests erupted across the South. More than fifteen thousand protesters were arrested. A bomb exploded at the Sixteenth Street Baptist Church, killing four black girls. Strange, the way inequality and equality once again walked hand in hand—for King’s Birmingham struggle would never have succeeded without the fierce attacks of Bull Connor. Astonishing that so many young people stepped forward, when warned that the next at risk might be you or you or you. 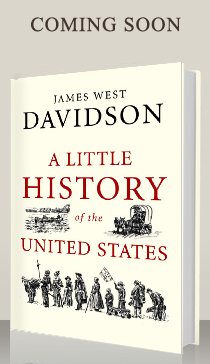 What would we have done? It’s easy, now, to say we would have marched. But make no mistake: the decision was immensely difficult. During the Montgomery bus boycott, the phone in King’s kitchen rang and a voice on the other end of the line warned him to get out of town or they would shoot him and blow his house up. “I couldn’t take it any longer,” King recalled. He agonized, trying “to think of a way to move out of the picture without appearing a coward.” Praying out loud, he heard an inner voice saying, “Martin Luther, stand up for righteousness, stand up for justice, stand up for truth. And lo I will be with you, even until the end of the world.”

He needed every ounce of strength he could muster. Because the civil rights movement had set off an avalanche that didn’t stop with civil rights. It careened through the rest of the 1960s, changing American life in a thousand different ways.

A Little History of the United States by James West Davidson is published by Yale University Press, September 2015.

CHRISTOPHER LANE’s The Age of Doubt: Tracing the Roots of Our Religious Uncertainty investigates the scientific, literary and intellectual icons…