The subject of stained glass windows has become an increasingly important aspect of the Pevsner guides, both in the revision of the English volumes and the first editions produced for Wales, Ireland and Scotland, as information on their designers and makers is obtained from local newspapers and church archives or supplied by enthusiasts for post-medieval glass. 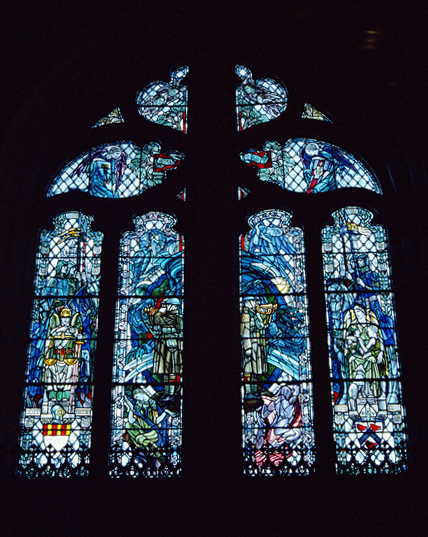 Publication of Peter Cormack’s Arts & Crafts Stained Glass brings together the work of an expert who has for many years helped the authors of the revised and new editions of the Buildings volumes to identify makers and designers of many church windows from c.1890-1914. A chapter of his new book is devoted to Christopher Whall and for the revised edition on Cambridgeshire (2014) Peter helped identify a previously unknown window by Whall, at Great Wilbraham church. Research meanwhile for the forthcoming volume on Aberdeenshire: South and Aberdeen (November 2015) has shown that Whall was also involved at this time in designing a window for the crypt of St Nicholas’s church in Aberdeen. In the same space are two windows by Douglas Strachan, who began as an artist working in Aberdeen and produced among other works a remarkable set of murals for the Music Hall in Union Street, Aberdeen. The windows at St Nicholas are the first works in glass by Strachan and the beginning of a very prolific career as the best of the Scottish glassmakers in the first half of the twentieth century and including the large scheme of windows for Kings College Chapel, Aberdeen, and St Laurence’s church, Forres, Moray. 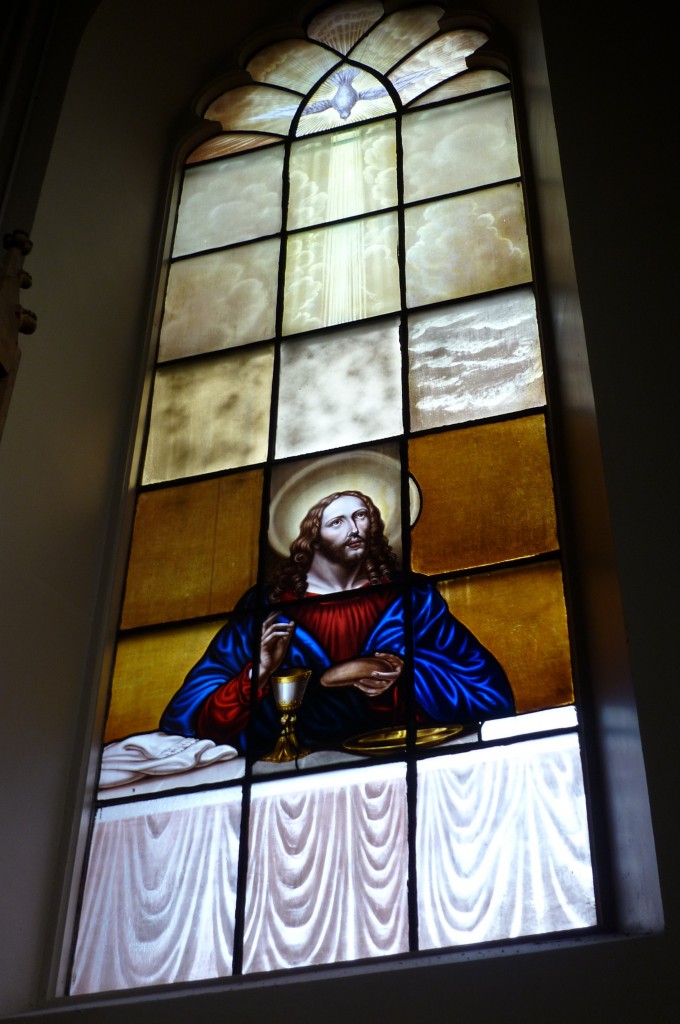 Research for the two Aberdeenshire volumes being published this year has identified other windows of interest. Here as elsewhere in Scotland in the nineteenth century the Episcopalian churches adopted stained glass much earlier than the Presbyterian churches. At St Devenick’s Episcopal Church, Bieldside, Aberdeen, is an interesting example of very early painted (rather than stained) glass. It was not made for the church and was instead supplied in 1839 for St Andrew’s Episcopal church (now Cathedral) in Aberdeen city centre. The window itself is a rare survival of glass supplied by the London maker William Collins (1777-1842) and may be unique in Scotland. It is very typical of his firm’s work in relying primarily on copying works by the Old Masters and here the model is the painting of Christ at the Last Supper by the Florentine artist Carlo Dolci (1616-86). Michael Kerney, expert on nineteenth century stained glass has discovered that Collins employed almost exactly the same design for the east window of Christ Church, Hilderstone, Staffordshire. Versions of the Dolci painting are to be seen in a variety of collections including Burghley House. 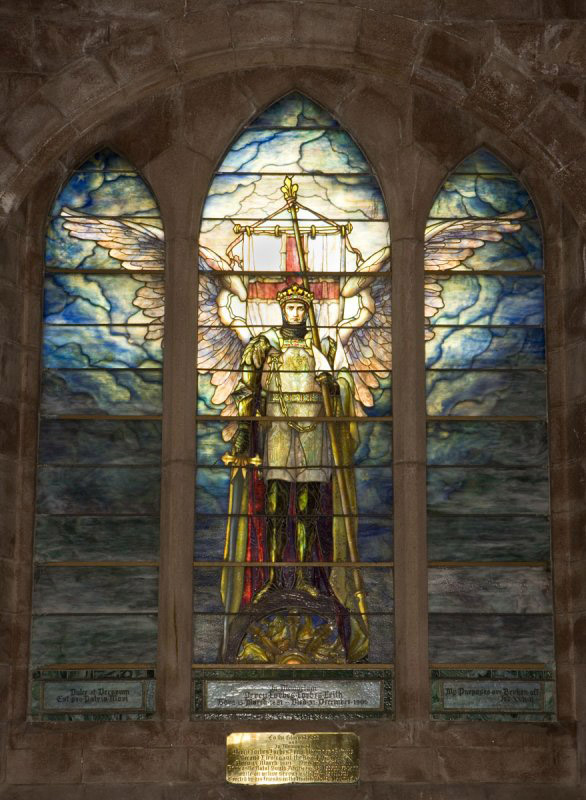 Another rare item in Aberdeenshire is the east window of Fyvie church. This was the church of the Forbes-Leith family who had purchased Fyvie Castle in 1889. Alexander Forbes-Leith came from the family at Leith Hall, also in Aberdeenshire, but settled in the United States and married Marie Louise January, daughter of a director of an Illinois steel mill. Forbes-Leith built the business into what became the United States Steel Corporation and with his fortune set about the remodelling of Fyvie Castle. His son Percy died of fever campaigning in the South African War in 1900 and in his memory his parents erected the magnificent east window, designed by Louis Comfort Tiffany, which depicts the deceased as St Michael standing on the Wheel of Time. Windows by Tiffany are extremely rare in the United Kingdom; another is at St Andrew, Kimbolton, Huntingdonshire commissioned by the American-born Duchess of Manchester in memory of her two daughters. Both windows use Tiffany’s patented ‘favrile’ glass where the colour is ingrained in the glass and forms varied colours and textures within each piece of glass unlike the uniform, transparency of contemporary glass.

Women Reporters at the Front Line by Ray Moseley