Characterised by wars, crises and disasters, the years between 1914 and 1945 are considered the ‘German chapter’ in the history of the West, as well as one of its most horrifying eras. In The Age of Catastrophe leading scholar of modern German history, Heinrich August Winkler, examines how and why Germany so radically broke with the normative project of the West and unleashed unrest around the world.

In this extract Winkler follows the genesis of the atom bomb and a series of events that ended the Second World War but would change the nature of warfare forever.

The End of the War: The Atom Bomb & Japan’s Capitulation

in The Age of Catastrophe by Heinrich August Winkler

‘On the morning of 6 August 1945, acting on the orders of President Truman, the crew of the Enola Gay bomber dropped the first atom bomb to be used as a military weapon.’

Early on 16 July 1945 – the day before the start of the Potsdam Conference – a team of American and British nuclear physicists at Alamogordo in the New Mexico desert conducted an experiment that was to change the world, when they successfully exploded the first atom bomb. The experiment was the result of years of research that had been massively funded by the United States government in the form of what had become known as the Manhattan Project.

American efforts were driven in particular by the fear that thanks to the research of three German nuclear physicists, Otto Hahn, Werner Heisenberg and Carl Friedrich von Weizs.cker, Hitler’s Germany might be able to produce and use the new means of mass destruction even before the United States. The fear proved to be unfounded, for Hitler was interested solely in ‘miracle weapons’ that could be used only in the shorter term and gave no thought to investing huge resources in a kind of technology that it was uncertain when or, indeed, if it would ever be used for military purposes. In consequence, German nuclear research lagged far behind its Anglo- Saxon counterpart and by 1944 had still only reached the stage at which Roosevelt’s Uranium Committee had begun its work in July 1941. Although nuclear experiments were conducted in Germany – on the island of Rügen in October 1944 and at Ohrdruf, an outpost of the Buchenwald concentration camp, in early March 1945, the latter supervised by the SS – Germany was nowhere near having the capability of deploying atomic weapons by the end of the war.

The destructive force of ‘Trinity’ – the code name for the bomb exploded in New Mexico – far exceeded the expectations of J. Robert Oppenheimer, the man in charge of the team at Los Alamos. The science editor of the New York Times, William L. Laurence, was able to observe the clandestine event from a distance of some twenty miles and reported seeing “a burst of flame such as had never before been seen on this planet, illuminating earth and sky, for a brief span that seemed eternal, with the might of many super- suns. [. . .] Then out of the great silence came a mighty thunder. For a brief interval the phenomena we had seen as light repeated themselves in terms of sound. It was the blast from thousands of blockbusters going off simultaneously at one spot. [. . .] The ground trembled under our feet as in an earthquake.”

Truman had arrived in Potsdam on 15 July and immediately after the experiment had taken place, he was told that it had been a success. Even before that, he had resolved that if there was no prospect to a rapid end to the war in the Far East, he would deploy the new weapon as soon as it had been tested. On 18 June, his chief of staff, Admiral William Leahy, had reckoned that based on the experiences of the Battle of Okinawa between April and June 1945, an invasion of the principal islands of Japan would cost the lives of some 268,000 American soldiers – approximately as many as had already lost their lives on every front in the Second World War. Together with his secretary of war, Henry Lewis Stimson, and his secretary of state, James Frances Byrnes, Truman believed that if the war were to continue using conventional weapons, it would be several months – possibly as late as the autumn of 1946 – before Japan surrendered. Since the atom bomb offered a chance to save the lives of hundreds of thousands of GIs, it would have to be dropped on a Japanese city. Not only Truman and his closest advisers were in agreement on this point, so, too, was Churchill. Truman and Byrnes – he, too, a former senator – were essentially domestic politicians in the summer of 1945, and both thought invariably of home voters, who would not forgive their own leaders if they continued a bloody and costly war even though they had the technical means to bring it to an early end.

After he had been informed of the results of the experiment in the New Mexico desert, Truman spoke to Stalin on the margins of the eighth plenary session of the Potsdam Conference on 24 July and mentioned in passing that the United States now had at its disposal a new and unusually destructive weapon. Stalin reacted calmly and said only that he hoped that the United States would use it to good effect against Japan. In fact Stalin had long known about the experiment at Alamogordo thanks to a Soviet spy, the nuclear physicist Klaus Fuchs, who had emigrated to Britain from Germany in 1933 and who had worked on the Manhattan Project.

At this stage no decision had been taken to drop a nuclear bomb on Japan. Before such a step was taken, Japan was to be given a chance to end the war. In an ultimatum dated 26 July, Truman, Churchill and the president of the National Government of the Republic of China, Chiang Kai-shek, who was not in fact present in Potsdam, demanded that Japan lay down its arms by 3 August at the latest and in that way avoid the total destruction of its armed forces and the devastation of the country’s islands.

The Allies’ conditions were non- negotiable. All of those deemed responsible for the country’s ‘irresponsible militarism’ and policy of aggressive expansionism must be removed from power and Japanese war criminals called to account. As set forth in the Cairo Declaration of November 1943, the territories and sovereignty of Japan were to be limited to the areas that it held before it embarked on its expansionist policy. And Japan would be occupied until such time as a new, democratic and peaceful order had been established. The Potsdam Declaration said nothing about the Tenno, demanding neither his abdication and condemnation nor the transition from a monarchy to a republic. Nor did the Declaration indicate the Allies’ willingness to leave Emperor Hirohito on the throne. Finally, there was no direct threat to use the atom bomb.

Since 7 April 1945 the Japanese government had been headed by Admiral Suzuki Kantaro, who, now in his late seventies, enjoyed the emperor’s trust. He owed his appointment to forces eager for peace. At the urging of the Japanese foreign minister, Togo Shigenori, the former prime minister Konoe Fumimaro began talks in Moscow in July in the hope of persuading the neutral Soviet Union to intervene with the Western Powers, but the Soviet negotiators reacted with extreme reserve and prevaricated. Konoe’s actions were discussed in Potsdam and were not without result, for the Potsdam Declaration demanded only the unconditional surrender of the Japanese armed forces, not of the country as a whole, as had been the case with Germany, leaving the Japanese the right of political self- determination and holding out the prospect of access to raw materials and participation in world trade relations. All of these points were intended as a signal to those forces in Tokyo that were keen to see a rapid return to peace.

But the Japanese leadership was deeply divided. The moderate forces associated with the foreign minister saw positive points in the Potsdam Declaration but felt that they needed to clarify the question as to the Allies’ future attitude to Emperor Hirohito, whereas the radical militarists associated with the minister of the army, Anami Korechika, and with the chief of the army’s general staff, General Umezu Yoshijiro, regarded the acceptance of an ultimatum as incompatible with Japanese honour. On 28 July, at the end of lengthy discussions within the Supreme War Council, Togo recommended that they wait for the Soviet response to Konoe’s mission. In a subsequent press conference, the prime minister explained that they had decided on a policy of mokusatsu, which, although difficult to translate, amounted to a refusal to acknowledge the situation and to treat it with silent contempt, prompting the minister for the army to coin the phrase that dominated the headlines of the nationalist press the following day: ‘Rejection Through Ignorance.’ From an American perspective this was an unambiguous no and, as such, a signal that the United States should begin preparations to drop the first atom bomb.

As the city chosen to be bombed, the planners opted for an industrial and military centre, the port of Hiroshima. At 08:15 on the morning of 6 August 1945, acting on the orders of President Truman, the crew of the Enola Gay bomber dropped the first atom bomb to be used as a military weapon from a height of approximately 2,000 feet. The bomb bore the name ‘Little Boy’. Some 80,000 of the city’s 355,000 inhabitants were killed outright, and a further 60,000 were dead by the end of 1945. Over the coming months and years a further 60,000 died from radioactive poisoning. Four- fifths of the city’s buildings were destroyed or severely damaged on 6 August 1945.

The Age of Catastrophe: A History of the West, 1914-1945 by Heinrich August Winkler is available from Yale University Press. 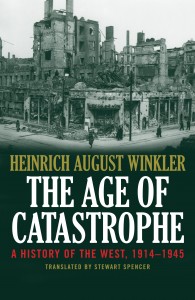