Summer is the season for hats. Weddings, garden parties and ‘ladies’ day’ at races like Ascot and Goodwood all call for decadent hats. Milliners today often look to the past for their inspiration, examining vintage illustrations, surviving costumes and the paintings we have to illustrate what we once wore.

To celebrate this summer season we take a closer look at some of the paintings of 18th-century artist George Romney, to find out what accessories can tell us about the wearer, and why portrait painters like Romney chose to portray a sitter’s costume in such careful detail. 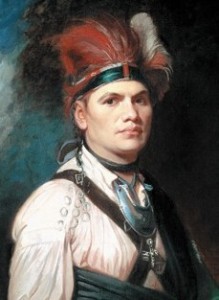 Turning the pages of Alex Kidson’s magisterial catalogue raisonné of the work of George Romney one becomes aware of just how enormously prolific a portrait painter he was, and how he deployed accessories to individualize and articulate images of both men and women. Accessories allowed him to introduce dynamism to an otherwise static pose. Of course, it wouldn’t be de rigeur to show a man wearing a hat, but a number of Romney’s male subjects do carry theirs – from the regular cocked variety to elaborate ceremonial top hats – with their gloves and cane. One notable exception to the no-headgear-for-men rule is the portrait of Thayendanegea, the Mohawk Indian Chief, who visited England twice and was painted by Romney in 1776.

Among the female portraits there is a spectacular range of headwear.

‘You need something a bit more substantial than a fascinator to balance out a tailored shoulder.’ – Milliner Stephen Jones

A hat served as a compositional device to balance the volume of an elaborate dress with an elegant flourish of silk, straw or muslin. A pretty ribbon could accentuate colour notes from elsewhere in the composition and beneath the brim of a hat a sitter might hint at expressions that are otherwise suppressed. As well as the great beauties, small girls, haughty intellectuals and sombre widows are all stylishly presented with their heads appropriately adorned.

When it came to painting his muse Emma Hart, later Lady Hamilton, Romney was free from the constraints of portraiture and he could use a veil or hat to convey other meanings, depicting Emma as the ambassadress, a sibyl, a spinstress – by turns solemn, seductive, playful and wistful.

George Romney: A Complete Catalogue of His Paintings by Alex Kidson is available in three volumes from Yale University Press.