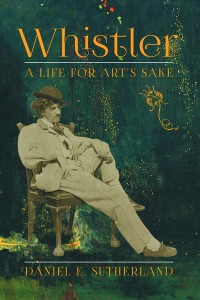 Daniel E. Sutherland’s biography of luminary American artist James McNeill Whistler (1834–1903) is not only the first in almost twenty years, but also the only account of the painter’s life to make extensive use of the Whistler’s private correspondence to tell the story of his life and work. This engaging personal history dispels the popular notion of Whistler as merely a combative, eccentric and unrelenting publicity seeker, a man as renowned for his public feuds with Oscar Wilde and John Ruskin as for the iconic portrait of his mother. The Whistler revealed by author Sutherland is an intense, introspective and complex man, plagued by self-doubt and haunted by an endless pursuit for perfection in his painting and drawing.

In this – the final section of a three-part interview with Whistler’s biographer – Daniel E. Sutherland describes what it has been like to research the life and times of such a luminary.

Nineteenth century Whistler biographer Elizabeth Pennell talked about being visited by ‘a haunting dream’ of the artist. Your work on his biography is complete, but does Whistler haunt you too?!

Whistler haunts anyone who takes a serious interest in his life and work, although he is generally a playful spectre, much like the Ghost of Christmas Present. He haunts because he is elusive, and dares you to pin him down. He detested biographers, and claimed that the only person capable of explaining Whistler was Whistler. There is something to that. Just when you think you understand him, some other possible interpretation of him or his work presents itself. Most scholars vent their frustration by saying Whistler was ‘contradictory’. I prefer to describe him as ‘complex’, because if you study him long enough for the entirety of his life, you find him to be absolutely consistent in his thinking and his actions. Without doubt, he evolved and changed over time, as did his art, but only in ways that added layers to his complexity, nothing that in retrospect should leave us scratching our heads and wondering why he did or said such-and-such a thing.

The standard questions put to all biographers is did they learn to love or hate their subject. Concerning Whistler, I would say neither one. I simply came to understand and accept his actions, and to separate what some people would deem his less desirable personal qualities from his exquisite art. And it must be said that some of his actions and words embarrassed, hurt, or worried his friends. For instance, he often treated his son (even though illegitimate) in ways that I, as a father, find quite callous. Likewise, he sometimes treated his most intimate female friends — that is, his lovers and mistresses – selfishly. That said, it is notoriously difficult for outsiders to judge such personal relationships, even among the living.  Despite the hundreds of letters in which Whistler discusses his life and art, the details of some events and issues remain closed to us. And besides, all those shadows and dark moments must be weighed against the many bright spots in his life and his many admirable qualities. If sometimes petulant and selfish, he was more often kind-hearted and generous. In the end, everything goes back to his art. He allowed nothing else, not the deepest friendships, to stand in its way, to interfere with his compulsive desire to create beautiful things. Art was all that mattered to him. Art was how he defined himself, and art, in turn, defined his life.

Critical acclaim for Whistler: A Life for Art’s Sake

‘We can salute Sutherland’s pluck and determination in reprising a beguiling subject who remains as elusive as the butterfly he took as his monogram.’ — Tanya Harrod, Literary Review

‘All that matters about Whistler is his art. On that, Sutherland writes with sensitivity and deep knowledge, and he makes you eager to go and see the pictures for yourself. Whistler would not have asked for anything more.’ – John Carey, The Sunday Times‘Sutherland’s account … is unobtrusively scholarly and he is a sensible explainer of the work, accessible and illuminating to the general reader. We get three thick wodges of plates, so the paintings are on hand. He knew everybody, learned what he needed to learn and became singular. Sutherland deftly explains how.’ — Sam Leith, Spectator‘[Sutherland] has delved into the artist’s correspondence as well as scores of archives to forge a lucid account of what by any standards was an unruly, restless life … This biography does much to illuminate Whistler’s career, showing up the public man, the tireless self-promoter, with his rough-and-tumble engagement with the art world of his day.’ — Mark Thomas, Daily Telegraph‘This is the story of a true bohemian.’ — Rachel Campbell-Johnston, The Times

Whistler: A Life for Art’s Sake is available from Yale.