The mystery surrounding the Shroud of Turin has fascinated people for centuries. Often considered to be the burial cloth of Jesus – with accounts of its veneration dating back to the fourteenth century – it is not difficult to understand why its stains and imprints have been so widely debated.

Since April 2015 the cloth has been back on public display in Turin’s cathedral (the first time in five years) and an estimated one million people are expected to visit it. Now, as the world prepares for a much-anticipated and historic visit to the Shroud by Pope Francis, on 21 June, Charles Freeman, author of Holy Bones, Holy Dust: How Relics Shaped the History of Medieval Europe, examines the long history of the relationship between the Catholic church and this controversial holy object.

What will Francis say?

– the Shroud of Turin and the papal visit on 21 June –

The celebrated Shroud of Turin is on show again. Since 19 April, long queues of pilgrims have been passing before it for a few brief moments of veneration. In comparison to expositions of four hundred years ago when the images could be seen by tumultuous crowds from afar off after it was unfurled in the Piazza Castello in Turin, now it is framed behind glass and the images can hardly be seen. Pope Francis is making his own pilgrimage on 21 June and it will be fascinating to hear what this new pope says about it.

The Shroud did not get off to a good start with the popes so far as its authenticity was concerned. The anti-pope Clement VII declared in 1390 that it could be venerated, and even an indulgence earned by pilgrims, but only on condition that it was publicly announced that it was NOT authentic. Clement had been told that the images were painted. In 1449 another attempt to claim authenticity was quashed by the bishop of Liège with a further report of the images as painted. However, after the Shroud had been purchased by Louis, duke of Savoy, in 1453, a number of popes confirmed indulgences for those who saw it within its chapel or at a public exposition. In 1506, pope Julius II gave the Shroud its own feast day, May 4th. None of these pronouncements insisted on a belief that the Shroud was authentic- there were thousands of sacred objects that were the subject of similar veneration.

It was not until the early nineteenth century that a pope, in this case Pius VII, actually saw the Shroud. It was publicly exposed in Pius’ presence in 1815. By this time the number of expositions was few and there is circumstantial evidence that the ‘painted’ images were fading. A lithograph of a brief exposition in 1868 shows one of the two images already very faint from the shoulders down. By the time the first photographs of the Shroud were taken in 1898 they were mere shadows. The most likely explanation for those remaining is that they are linen discoloured by centuries underlying a gessoed and painted surface but surprisingly, although this hypothesis matches all the evidence, it has never been tested out. The iconography of the surviving images, especially the bloodstains and marks of the scourging, fits closely with other depictions of Christ’s Passion from the early fourteenth century.

Despite the first photographs and the worldwide enthusiasm they inspired, the Church itself remained cautious. The Catholic Encyclopedia of 1907-14 opined that ‘the immense preponderance of opinion among learned Catholics was adverse to the authenticity of the relic’. In 1976 the archbishop of Turin commissioned a group of experts to advise on the Shroud. Despite some hesitations they accepted that the Shroud was probably medieval, ‘a masterpiece of [medieval] figurative art’ according to the art historian involved and ‘an artistic impression . . . made during the 13th century or later’ according to the archaeologist. Two years later a self-appointed team from the United States, the Shroud of Turin Research Project (STURP), visited Turin with seven tons of imaging equipment  As STURP had permission from ex-king Umberto II, duke of Savoy, to examine the cloth, which he still owned, the cathedral authorities were forced to stand clear of the frenzied five day examination. Despite an enormous fanfare of publicity and the declaration that the Shroud was ‘a mystery’, STURP actually failed to find any evidence of a pre-medieval origin. Yet their view that the Shroud was a ‘mystery’ led some to believe that it might therefore be authentic and this view still dominates the internet debates.

Up to now the contact between popes and the Shroud has been very limited but in 1983 Umberto bequeathed the Shroud to the Vatican and the pope was now the owner. So it was that pope John Paul II authorised the next step, the radiocarbon dating of the Shroud. It took place in 1988 and came out again with a medieval provenance for the Shroud, the flax for the linen cut between 1260 and 1390, with 95 per cent certainty. John Paul authorised the publication of the results, and in Turin cardinal archbishop Ballestrero hoped that ‘this affirmation [of the Shroud’s date] can cause a rethinking in terms of faith especially among those most attached to the folklore [sic] of the Shroud’. The Church has never repudiated the tests and attempts to challenge them have failed. Close examination showed that the sample came from the original weave and that, after the samples had been cleaned by the laboratories, there was no significant contamination which might have swayed the result.

When John Paul visited Turin in 1998, it was only the second direct contact between a pope and the Shroud. Even though by now the pope knew the Shroud was medieval, the haunting images had an immense impact on him. ‘The imprint left by the tortured body of the Crucified One, which attests to the tremendous human capacity for causing pain and death to one’s fellow man, stands as an icon of the suffering of the innocent in every age’ was his response. His successor Benedict XVI appeared even more committed to ‘an Icon written in blood, the blood of a man who was scourged, crowned with thorns, crucified and whose right side was pierced’. In the text he issued after his veneration, Benedict talked of ‘a winding sheet, which covered the corpse of a man who was crucified, corresponding to everything that the Gospels say of Jesus.’ Some have seen hints here that he does, in fact, believe that the Shroud is authentic

On the question of authenticity the Church has retreated. ‘Since it is not a matter of faith, the Church has no specific competence to pronounce on these questions’ as pope John Paul put it in 1998, despite his acceptance of the radiocarbon results. Officially the Church remains open to future research ‘so long as the research is conducted with intellectual honesty, without preconceptions and ideological presumptions’, as the present archbishop of Turin, Cesere Nosiglia has put it. However this is meaningless unless the Church allows direct access to the Shroud by specialists and only the pope can authorise this. Meanwhile all manners of wondrous theories about how the Shroud did indeed wrap the body of Christ, even that the images now are as they have always been, caused by radiation at the moment of the Resurrection, flourish unchecked on the internet.

This is why the visit of pope Francis is so fascinating. The present stance of the Church, as initiator and overseer of tests that suggests a medieval origin for the Shroud, is hardly compatible with is neutrality on authenticity. It is risky for the Church to stand back from the debate when there is no significant evidence that dates the Shroud before the medieval period, especially when its position allows pseudoscientific theories and talk of miracles to spread unchecked. To avoid embarrassment it would be good if pope Francis could grasp the initiative and order the tests that could settle the question of the Shroud’s authenticity once and for all. We shall wait and see what he has to say on June 21st.

For more on The Shroud of Turin as a Ceremonial Easter Cloth click here.

Charles Freeman’s Holy Bones, Holy Dust: How Relics Shaped the History of Medieval Europe was published by Yale in 2011. In an article in the November 2014 edition of History Today (freely available online) he argues that the Shroud probably originated as a ceremonial cloth in the Easter Day rituals. 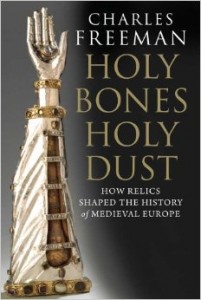 It’s only a few days until the London 2012 Olympic Games kicks off, but where did it all…