Deborah Cramer has spent the last few years following a relatively unknown and unassuming shorebird, the red knot. Her new book, The Narrow Edge: A Tiny Bird, an Ancient Crab, and an Epic Journey, tells the story of the remarkable journey that these birds embark upon each year, traveling thousands of miles from the tip of the South American mainland to the arctic, and then back again. The Narrow Edge is released at an important point in history, when the rufa red knot has just become the first United States bird to be listed under the Endangered Species Act due to the affects of global warming, a fact that also has alarming consequences for human well-being.

To celebrate the publication of this new book, the author guest blogs for us about how she came to tell the story of these extraordinary animals.

The Narrow Edge by Deborah Cramer

For the past few years, I tracked a tiny shorebird—the red knot—from its remote winter home on Tierra del Fuego up into its (difficult to reach) Arctic nesting grounds. Following the birds along the edges of two continents as they undertook an extraordinary 19, 000 mile annual migration, I walked a windy beach whose high winds and rushing tides resisted Spanish explorers 500 years ago, but where the birds made a winter home. I sought them on beaches crowded with bathers in Argentina, bug-infested marshes, pristine barrier islands, and beaches ravaged by Hurricane Sandy. Late at night, when the moon was full on a spring tide, I sought out the world’s greatest concentration of horseshoe crabs– ancient, primordial animals that come out of the depths to spawn once a year, whose eggs are essential fuel for migrating shorebirds, and whose blue blood is critical for human health. I detoured to Boston’s Massachusetts General Hospital to see why.

Returning home, I struggled with how best to assemble the story of horseshoe crabs, and the knot’s near-miraculous journey. Just as the corrected page proofs were due, the U.S. Fish and Wildlife Service listed the rufa red knot as threatened under the Endangered Species Act, its future imperiled by global warming—the first bird so listed in the U.S. Following knots along mile after mile of coast, I witnessed firsthand, how, and why, and began to see how the story of this plucky bird holds the story of many shorebirds.

I came away with a story of loss and resilience, a firsthand account of the tenacity of a tiny bird and an ancient crab on an epic journey, and a story of courage—the courage of many people who season by season and beach by beach, and with so much love, provide both birds and crabs safe harbor. They keep alive the possibility that our children may inherit a sea edge that still teems with life, a sea edge that humans and wildlife can share. They need us now.

In the end, writing is a solitary undertaking—the writer facing the page. And at the same time, in my case, it took a village to get me to that place. Traveling the length of two continents is expensive. Without The Curtis and Edith Munson Foundation, Environment Canada, the Wellesley Elvira Stevens Traveling Fellowship, the Norcross Wildlife Foundation, and The Ocean Foundation, I would never have made these many miles.

Deborah Cramer is the author of Great Waters: An Atlantic Passage and Smithsonian Ocean: Our Water, Our World. She lives with her family on a salt marsh in Gloucester, MA. 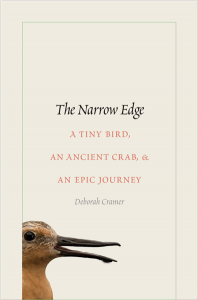 The Narrow Edge: A Tiny Bird, an Ancient Crab, and an Epic Journey by Deborah Cramer is available from Yale University Press.

Image courtesy of U. S. Fish and Wildlife Service – Northeast Region via Flickr.

Aristotle, Aquinas and Austerity.
The Reality of Economic Cuts.

Tightening one’s belt, battening down the hatches or, simply, austerity. Whatever euphemism is used, this is a process…